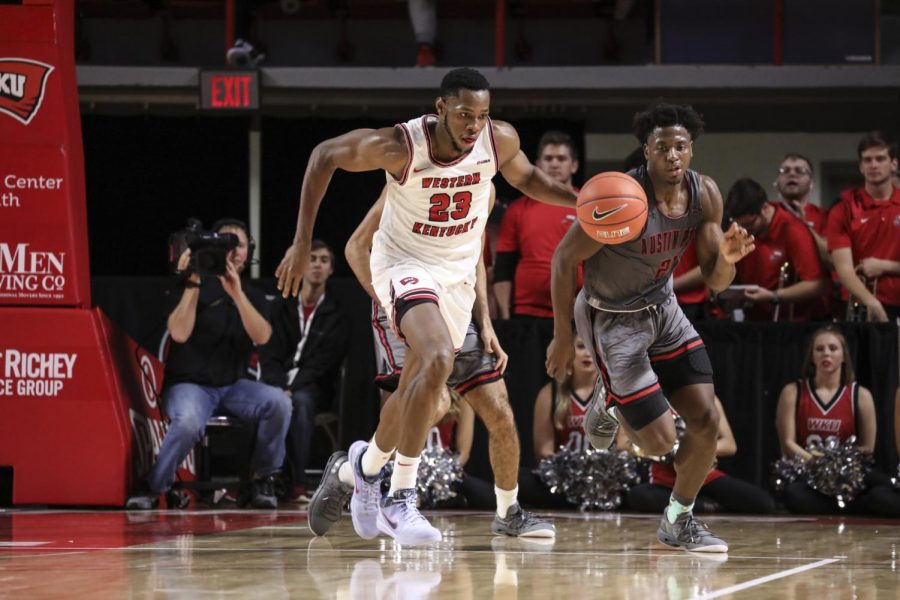 Charles Bassey charging up the court during the 2019-20 regular season.

This is the second straight year that Bassey has been named to the watch list. Last season, he became the first Hilltopper to make the list since Courtney Lee in 2007.

A list of the midseason 30-member team will be released in early February, followed by the 10 national semifinalists and four finalists on March 4 and March 16, respectively. The trophy will be awarded during the Final Four at the Naismith Awards Brunch on April 4.

Bassey has already been named a Preseason Second-Team All-American by Lindy’s Sports Magazine, as well as a member of the watch list for the Kareem Abdul-Jabbar Center of the Year Award.

He was a top-five finalist for the award as a freshman.

Bassey will enter this season as the nation’s active leader in career rebounding average 9.8 boards per game.

Last season, he averaged 15.3 points, 9.2 rebounds, 1.3 assists and 1.2 blocks in 10 games before suffering a tibial plateau fracture in his left leg against Arkansas on Dec. 7.

Last season, Bassey was selected to the preseason watch lists for the Naismith Trophy, the John R. Wooden Award and the Oscar Robertson Trophy, the most prestigious National Player of the Year honors in the country.

As a freshman, Bassey averaged 14.6 points, 10 rebounds, and 2.4 blocks while shooting 62.7 percent from the field leading to a Freshman All-American accolade.

Bassey became the second player in Conference USA history to win both C-USA Freshman of the Year and Defensive Player of the Year in the same season in 2019, and he was also named to the All-C-USA First Team, All-Freshman Team and All-Defensive Team.

WKU is one of 12 schools with a player on the watch list for both the college and high school National Player of the Year awards, along with Baylor, Duke, Florida State, Kansas, Kentucky, Michigan, Michigan State, Stanford, Tennessee, UCLA and Villanova.