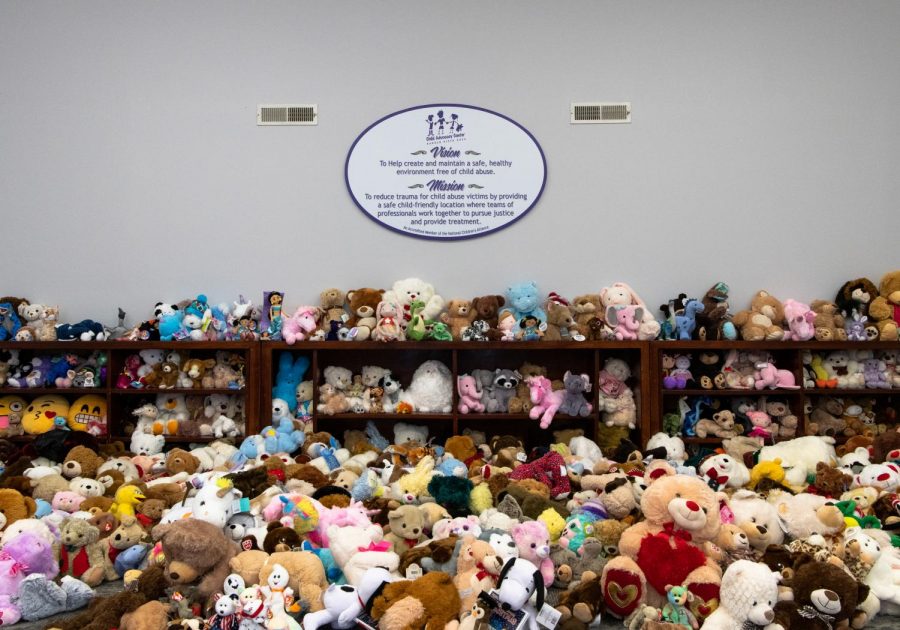 The teddy bear room is filled with all sorts of toys and is where some meetings at the Child Advocacy Center are held.

Kentucky surpasses every other state with the highest rates of child maltreatment and neglect in the nation, according to the most recent report published by the Children’s Bureau.

Recently, the Center for Child Welfare Education and Research at WKU has paired with the Barren River Area Child Advocacy Center to address the unrelenting issue of the wellbeing of Kentucky children, aiming to approach the issue by treating parents’ unresolved trauma while providing similar therapies to their children.

WKU and Barren River have begun an initiative called GIFT, Group Intervention for Families with Trauma, to ad- dress intergenerational trauma. Child abuse and neglect often materialize as a result of parents’ trauma, according to GIFT’s website.

There are many adults who suffered trauma as children that were in the child welfare system and were never treated, said Heather Webb, clinical director of the Barren River Area Child Advocacy Center and one of the leaders of the GIFT project.

“[They] are now old enough to have kids, and are probably in the system again,” Webb said. “I mean, that’s what we see, it’s very generational. So we’re trying to stave it off at both ends.”

Matthew Woodward, a psychological sciences professor, is a clinical psychologist who specializes in the area of trauma and post-traumatic stress disorders and has lent his knowledge of the subject as a leader of the GIFT initiative.

“A lot of parents come in with their own histories of extensive trauma — [they may have] histories of childhood abuse, they also may have been abused as adults and violent romantic relationships,” Woodward said. “We wanted to develop some- thing that could help address that.”

GIFT offers therapy to a group of non-offending parents with children who are also receiving treatment through the child welfare system.

“Our hope is that this is something that is going to be beneficial for parents that will help them get over things like PTSD and depression,” Woodward said. “I would love to think that it might [also] help with their substance use problems.”

The goal of GIFT is to interfere with the cycle of generational trauma.

“We hope that [GIFT] benefits the parents and then that kind of trickles down,” said Woodward, “the idea is we’re not just going to benefit the parents, this is going to be beneficial for the family general.”

Thus far, the only participating parents have been mothers.

“If we ever got to the point where we had dads that were interested, we would look at doing a group for them, but that’s just not something that we’ve had much interest in,” said Webb. “It’s usually moms trying to get their kids back.”

Participating in the GIFT program may increase a mother’s likelihood of being able to reconnect with her children.

“I’ve made it a requirement for a couple of my child clients that their parent or their mom complete the treatment before I’m allowing visits to start,” Webb said.

The GIFT program intentionally separated women’s and men’s therapy groups. “A lot of women’s trauma comes from men,” Webb said. “So we can’t have a man in the middle of that group, because that’s not a safe place.”

Following a referral, someone from the GIFT team will reach out to whoever has been referred to determine if they might benefit from the program.

“We follow up and reach out to them to try and see whether this is a good fit for them,” Woodward said. “We go through a whole screening process with people and do a mental health assessment with them.”

If the leadership team behind GIFT, including Webb and Woodward, decides that GIFT might not be the right fit for someone who has been referred, they try to direct them towards other resources.

The treatment itself consists of two-hour therapy sessions for 12 weeks. GIFT has completed one pilot group that began early this year.

Each group therapy session is structured with intentional goals set, and the therapists heavily prepare beforehand.

“We don’t just bring people in and say, ‘What do you want to talk about?’” Woodward said. “We have specific sorts of topics that we cover and try to help people work through.”

GIFT incorporates treatment for post-traumatic stress disorder into the therapy sessions. As a research project, GIFT intends to track how this treatment works specifically with parents in the child welfare system rather than a broad group of individuals with PTSD.

After the first group completed their 12 sessions, some group members exchanged phone numbers so that they would be able to keep in touch with each other.

“It’s nice to see that there’s sort of a support piece that gets built into the format [of GIFT] that people can benefit from,” Woodward said.

No program similar to GIFT is being offered by any other mental health providers in the community, Woodward said. He is especially excited about the fact that they are able to provide effective and free mental health services.

“One of the biggest barriers to people getting past mental health challenges is a lot of people just don’t ever get the treatment,” Woodward said. “It’s not like we don’t know how to help them, there are good treatments out there, they just aren’t able to access them for various reasons.”

Woodward explained that WKU’s Center for Child Welfare Education and Research and the Barren River Area Child Advocacy Center were able to pool their resources together to make GIFT’s mental health services both high-quality and accessible.

A portion of federal funds that sustains Barren River Area Child Advocacy Center is currently being allocated to the GIFT project to cover costs of services, but Woodward said they are actively looking for additional ways to fund the program.

In addition to bringing new mental health resources to the greater Barren River area community, GIFT is an educational tool for students at WKU. Graduate students from the Department of Psychological Sciences and the Department of Social Work at WKU have been closely involved with the project.

“[Students] are coming in, and they’re getting experience working directly with clients getting that experience to learn how to assess trauma history, how to assess mental health symptoms, how to determine what the best treatment options are for this per- son, how do we figure out whether they are benefiting or not and why?” Woodward said.

At its foundation, GIFT worked to compound resources from WKU and Barren River to ensure that participants would reap the most benefits possible from the program.

GIFT is intended to be “a partnership of WKU with community partners… we really want to be interacting with and developing relationships with organizations in the community,” Woodward said. “We don’t just want these projects to stay within the field of academia and the university.”

The clients, the community and students all have a hand in benefitting from GIFT.

Barren River is working with the Children’s Advocacy Center of the Bluegrass to lead them in an effort to provide a similar program in their region, Webb said.

A multi-part report done by the Louisville Courier-Journal highlights the stress and overwhelming caseload faced by a chronically understaffed child welfare and social service system in Kentucky.

The report on child maltreatment that puts Kentucky at the top of the list was released based on data from the 2018 federal fiscal year. Kentucky has maintained its position at number one for the past two years and has sat in the top 10 of the list for over a decade.

Barren River and the GIFT initiative aim to approach the epidemic of child maltreatment in Kentucky from both ends of the spectrum by providing mental health treatment to address trauma in both parents and their children.

Multimedia Editor Sam Mallon can be reached at [email protected] topper.wku.edu. Follow her on Instagram at @samamallon.