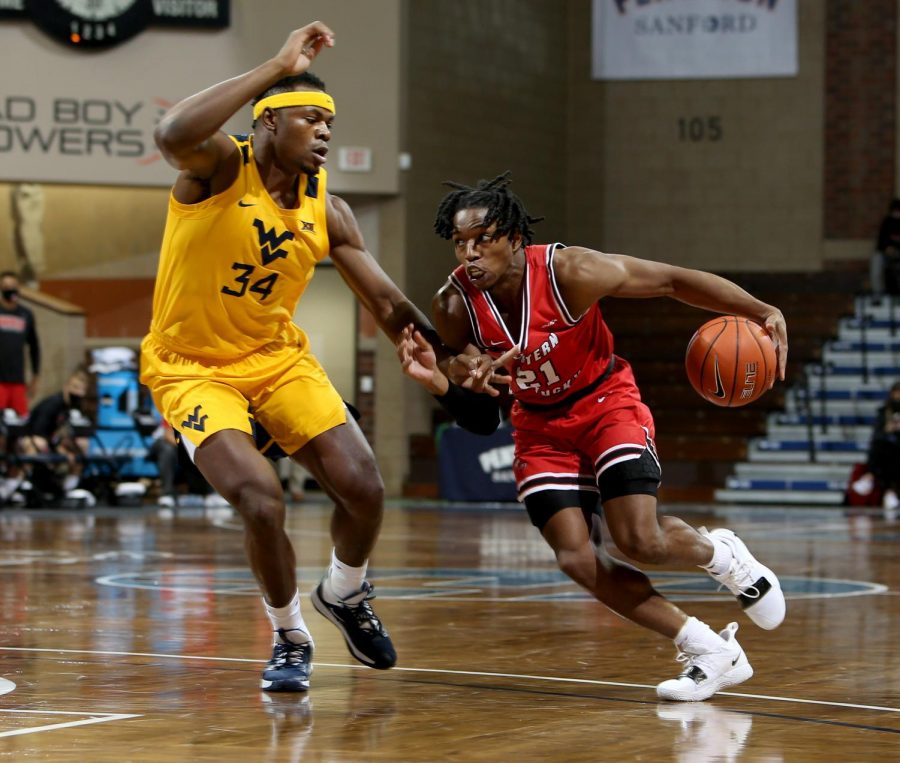 Sioux Falls, SD - Nov. 27: Kenny Cooper #21 of the Western Kentucky Hilltoppers drives to the basket against Oscar Tshiebwe #34 of the West Virginia Mountaineers.

The Hilltoppers started the 2020 season in a shootout against the Panthers who went 25-6 last year before the season ended.

“We had an opportunity right off the bat to play one of the better teams in the country in Northern Iowa,” head coach Rick Stansbury said. “Everybody who understands basketball across the country, you know how good they are, and they did what they do best today. I’m not sure they’ll lose another game this season when they make 20 three pointers.”

Northern Iowa was hot all night from the three-point line as they went 20-for-39, 51.3%, from behind the arc. A.J. Green went 10-20 for the game and 6-12 from the three while Noah Carter set a school record for most threes in a game with nine made threes. Both players scored 28 points.

Northern Iowa only lost one game in 2019 when hitting 10 or more threes.

Even with the hot shooting, it wasn’t enough to eclipse the Hilltoppers as the depth of WKU was too much for the Panthers.

Junior Charles Bassey returned to the court for the first time since his season-ending leg injury last year against Arkansas. An under the radar performance, as he went 5-13 for 11 points and eight rebounds.

The newcomers to the WKU squad proved to be huge for WKU as junior transfer Luke Frampton and freshman Dayvion McKnight came up big.

Frampton did what he was brought into the program to do, make threes, as he went 3-4 from the three-point line and 5-5 from the free-throw line, scoring 14 points with four rebounds and two assists.

Dayvion McKnight had a big opening day as he controlled the offense when senior Taveion Hollingsworth wasn’t on the court. McKnight didn’t look like a freshman as he went 7-of-10 from the field with 21 points, four rebounds, three assists, and three steals.

Hollingsworth led the show as he went 8-18 from the field and 10-13 from the free-throw line, totaling 26 points with three rebounds and two assists. In the first half, Hollingsworth surpassed 1,500 career points as a Hilltopper, helping stamp WKU’s first win of the season.

WKU struggled early only scoring eight points in the first ten minutes of the game. Memphis went on a 14-0 run for seven minutes before WKU scored again. WKU then went on an 11-0 run themselves to take a 19-18 lead.

The Hilltoppers found themselves on the opposite side of the turnover battle as they committed eight in the first half compared to the Tigers three and only got to the free throw line four times.

The second half became the ‘big show’ as it was started with a block party from Charles Bassey, rejecting three shots at the rim all within two minutes.

WKU took advantage of their size with Bassey and Carson Williams stuffing the paint and outrebounding the Tigers to get the fast breaks going, leading them to jump out to a 50-43 lead at the 12-minute commercial timeout.

Bassey dominated Memphis in the paint the whole second half and senior transfer Kenny Cooper helped ice the game, again, when the Tigers found a little light of hope, with a couple of big rebounds and going 5-6 from the free throw line in the final minute of the game to secure the win.

“It was pretty good just getting back to my old self and playing to my capabilities, I felt good playing with my team,” Bassey said.

Bassey finished the game with 21 points, 14 rebounds, and seven blocks while shooting 8-13 from the field. Williams went 5-8 for 14 points, nine rebounds, and two assists. Hollingsworth had 18 points on 6-11 shooting. WKU outrebounded Memphis 44-32 and made more free throws than the Tigers took, 19-24 to 6-11.

Bassey picked up two early offensive fouls in three minutes. That didn’t change WKU’s approach as they dominated the paint in the first half 24-10.

While the Mountaineers settled for jump shots, WKU constantly moved without the ball to create space, leading them to take a 36-33 lead into halftime.

The opposite happened in the second half down the stretch.

WKU opened the second half on a 9-2 run, creating multiple turnovers and putting constant pressure on the Mountaineers for easy dunks and layups.

Bassey, Taveion Hollingsworth, and Josh Anderson were taken out of the game, making the Hilltopper offense stagnant and turning into an isolation game, stopping the ball movement that was working before, allowing West Virginia to bring the deficit to four.

The Mountaineers took control from there after Bassey checked out of the game again due to an apparent injury to his leg but ultimately made it back to the game, while West Virginia went on an 18-2 run taking a 59-52 lead.

The Mountaineers would go on to hit clutch free throws at the end of the game to take the win and the championship trophy.

“We didn’t get the win but I’m awfully proud of the way these guys fought in these three games,” Stansbury said. “This wasn’t a training trip we went on. We got thrown into the fire with these three teams and I’m proud of their effort.”

Bassey led all scorers with 15 points and eight rebounds, followed by Hollingsworth with 13 points and three assists. Senior Josh Anderson had 10 points with three rebounds, two assists, and two steals.

WKU will now travel to Louisville to play three games at the Wade Houston Tipoff Classic, starting with Louisville on Tuesday at 5 p.m., Prairie View A&M on Thursday at 5 p.m., and Little Rock on Friday at 6 p.m.