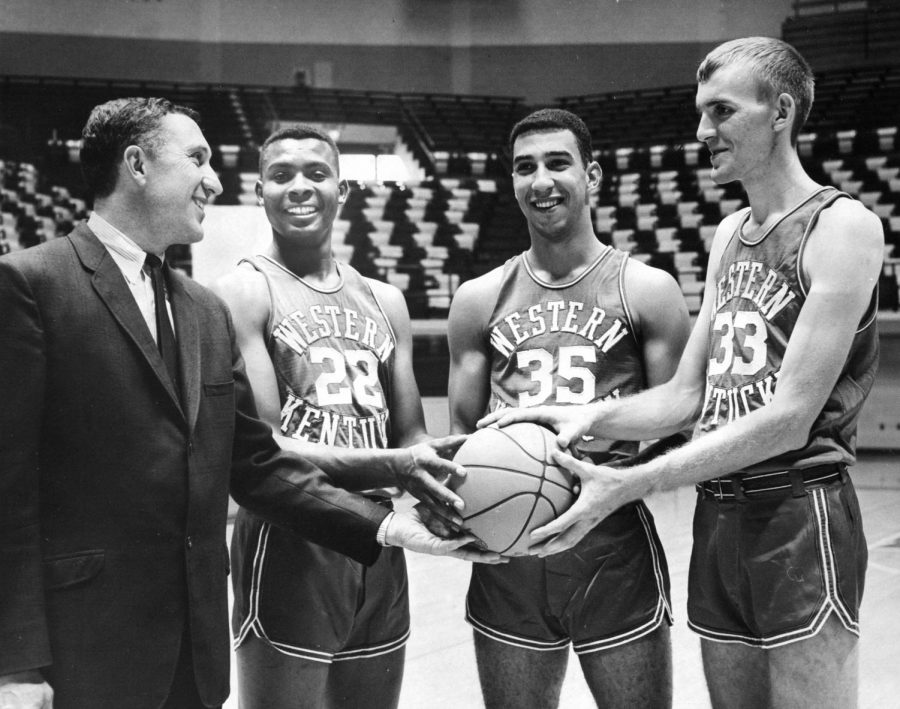 On Monday morning, WKU Men’s Basketball legend John Oldham passed away in Bowling Green at the age of 97.

“We are very saddened to learn of the passing of John Oldham,” WKU Director of Athletics Todd Stewart said in a press release.  “Coach Oldham is one of the all-time iconic figures in Western Kentucky University Athletics history who impacted the Hilltoppers as a player, head coach, athletics director and developer of the Red Towel athletics logo.”

Oldham, a native of Hartford, Kentucky, came to WKU in 1942 to play basketball for Coach E.A. Diddle after earning All-State honors at Hartford High School. After his freshman year at WKU, Oldham served in the U.S. Navy for three years during World War II.

He was named an All-American by the United Press International and the Associated Press as a senior in 1949, and earned a spot on the first All-Ohio Valley Conference Team that season.

Oldham left his mark on Hilltopper Basketball in each of his roles, earning All-America accolades as a player in 1949 and later coaching some of the greatest teams in WKU history.

Oldham’s impact on WKU was so big that the court in Diddle Arena was named in his honor on Dec. 27, 2012 and was selected to the WKU Basketball All-Century Team in 2018 as a player.

“It was a special evening on December 27, 2012, when we officially named the court in Diddle Arena ‘John Oldham Court’ with he and his family in attendance, ensuring him the recognition he never sought but certainly deserved,” Stewart said. “It was an honor to have known him, and our thoughts are prayers are with his family.”

After two seasons for the NBA’s Fort Wayne, now Detroit, Pistons, Oldham returned to Bowling Green to coach at Old College High School before moving on to Tennessee Tech as the head coach. He returned to the hill in 1964 to take over the Hilltopper Basketball program from the retiring coach Diddle.

In seven seasons at WKU, from 1964-71, Oldham had a 142-40 record and led the Hilltoppers to five postseason trips, four conference championships, a Sweet 16 berth and a trip to the Final Four in 1971.

Oldham’s .780 winning percentage as a head coach is the best in WKU’s men’s basketball history, and his number 42 from his days on the court hang in the rafters of Diddle Arena as tribute. He coached two of WKU’s three All-Americans, Clem Haskins and Jim McDaniels.

According to the release, In all, Oldham contributed to 244 men’s basketball victories, eight postseason appearances and nine conference championships in 11 years as a player and head coach. The overall record of those 11 teams was a remarkable 244-53, or 82.2%.

Oldham was also a pioneer for social change in the sport, putting the Hilltoppers on the forefront of integration in the south in the 1960s.

Oldham served as athletic director from 1971-86 and, in 1971, conceptualized the Red Towel logo, which has turned into one of the most recognizable and historic logos in the country.

His time as A.D. lined up with the creation of Title IX, the revival of women’s athletics and the football program’s move to Division I-AA, and his coaching hires included some WKU’s best in Paul Sanderford, Joel Murrie, and Curtiss Long.

“His impactful 15-year tenure as WKU’s Director of Athletics from 1971-86 trails only Ed Diddle for longest service in overseeing WKU Athletics,” Stewart said.  “A soft spoken and enormously kind man, I truly enjoyed knowing him, visiting with him and learning so much about WKU from him.”

A private funeral service is set for Monday, Nov. 30, at J.C. Kirby & Son Funeral Chapel on Lover’s Lane.  Oldham will be buried with military honors at Fairview Cemetery.  The family is planning a memorial service in the spring.