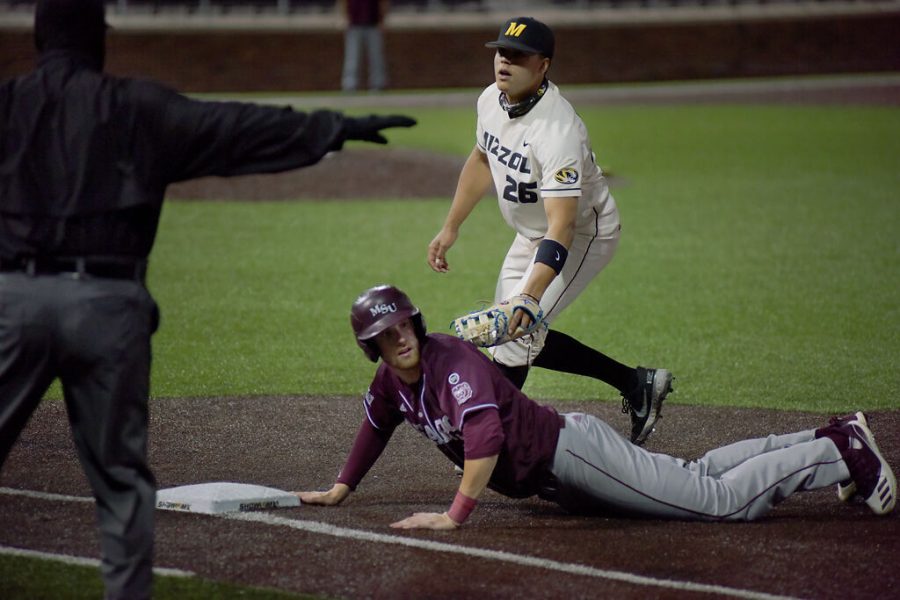 With as many times as Missouri pitchers walked Missouri State batters, the Bears may have been better suited on the MKT Trail than on the turf at Taylor Stadium.

MU arms issued 10 free passes Tuesday night with an additional hit by pitch thrown in for good measure. The Bears converted those walks into runs and beat Missouri baseball 7-5.

“When you put them on that way they usually score, and we just dug ourselves too big of a hole to dig out of tonight,” Missouri coach Steve Bieser said.

The Tigers, already short on pitchers, burned through five relievers against the Bears, with only two able to hold them scoreless.

Missouri starter Trae Robertson took the loss, falling to 0-2 this year. He gave up three earned runs to Missouri State and four of the Bears’ eight hits.

Cameron Pferrer, Drew Garrett, Andrew Vail, Jackson Lancaster and Andrew Keefer all made one- or two-inning appearances out of the pen, with only Lancaster able to hold Missouri State hitless in his inning, though he did walk two batters. The other relievers combined to give up four runs on three hits and walked five.

Keefer went against the trend that prior pitchers set. Only listed as an infielder on the roster, Keefer has spent most of his defensive innings locking down right field. Tuesday, he entered to pitch in the top of the ninth inning. It only took Keefer 14 pitches to get three outs, two of which came via strikeouts.

“He’s been wanting to get on the mound for a while,” Bieser said, “And we’ve kinda held him back because he’s an everyday player for us and honestly early on we didn’t think we needed extra pitching.”

Bieser went on to say that he was impressed also with Lancaster, saying the Itawamba Community College transfer may see more innings on the rubber in the future.

Missing again out of the pen was freshman Ian Lohse. Originally thought to just need some rest, Lohse hasn’t seen action in more than a week. After the game, Bieser said he was still being evaluated but to not expect Lohse to throw in a game for another few weeks.

“We’re still trying to get some tests done,” Bieser said. ‘You know, he’s a young up and comer in our program and we want to make sure we’re doing right by him by taking care of him.”

Missouri batters walked plenty too — six times to be exact — but they couldn’t put as many hits on the board to grit out a comeback. Missouri’s and Missouri State’s 16 walks added up together at 90 feet apiece equal 1,440 feet – a little more than a quarter-mile.

The Tigers struggled up until the eighth inning. Until that point they had just three hits and one run compared to the Bears’ seven and seven.

“It is really a tough challenge for your hitters,” Bieser said. “You’re always seeing somebody different. You always have to get a different timing.”

The one player who didn’t have trouble was catcher Tre Morris. The field general had two RBI and joined Torin Montgomery as the only Missouri hitters with more than one hit. Montgomery went 2 for 4 while Morris batted 3 for 4.

Missouri gave Missouri State a scare in the eighth inning. Keefer started things off with a single, and a couple of batters later, Morris doubled to score two. The Tigers were down 7-3 and were looking for a rally.

Shortstop Josh Day hit an RBI single up the middle. When Montgomery singled to right-center in the next at-bat, Day rounded third hard and chugged for home. The call was close, but Day had been too aggressive and was called out at home. The call was upheld upon review despite Bieser’s protests that catcher Logan Wiley had not allowed a lane to the plate.

Bieser took the blame for the play, saying he waited too long to throw up the “hold” sign to Day, who rounded third hard. The coach wanted to get a look at the strength of the cutoff throw, but Day was already on the way home.

Missouri surely missed the offensive firepower of Mark Vierling and Chad McDaniel at the plate Tuesday. Vierling was serving a one-game suspension enforced by the Southeastern Conference after he was thrown out of the game against South Carolina on Sunday. McDaniel is taking some time off, Bieser said, to recover from an injury sustained a few weeks ago.

With the win, Missouri State now leads the all-time series between the two state schools 30-29. MU had won the previous four meetings dating back to 2018 and will have a chance April 20 in Springfield to equalize the series at 30 apiece.