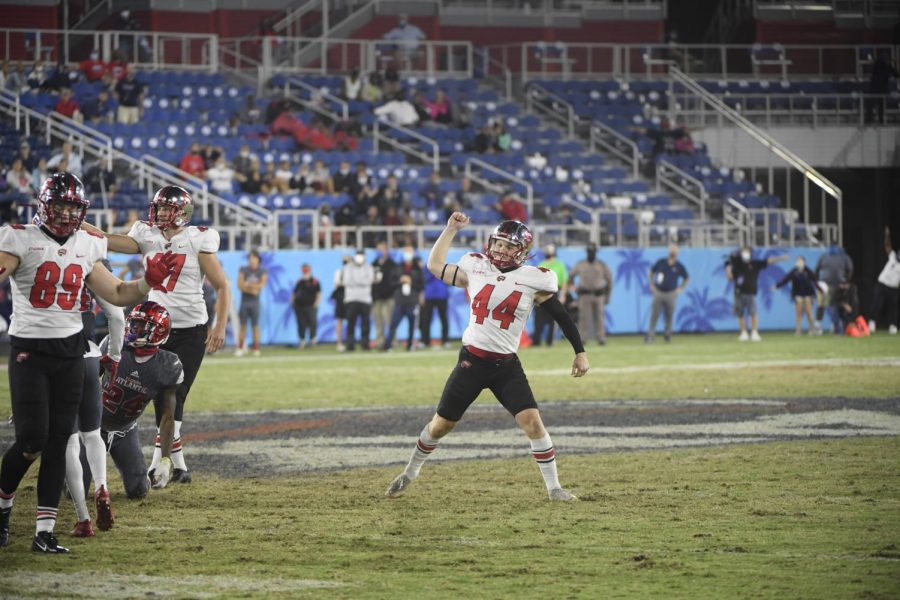 Owls head coach Willie Taggart, replaced redshirt junior Nick Tronti for redshirt freshman Javion Posey in the fourth quarter. Posey would go on to score the lone touchdown with 2:27 remaining in regulation off of a 11-yard rush to the endzone.

The Hilltoppers had an early scoring opportunity in the first quarter until the Owls held WKU to a 50 yard missed field goal.

“I feel bad for him. We took a sack early in the game when we were in field goal range which was extremely poor,” head coach Tyson Helton said in regards to when Pigrome was sacked for a loss of 13 yards putting redshirt sophomore kicker Brayden Narveson further away to make a kick.

“This was a tough environment to kick in. He’s a gamer, he steps up and makes plays,” Helton said of Narveson.

For the first time in four games, the WKU defense did not allow a score on the opposing team’s opening drive. FAU made it all the way up to their own 48-yard line, but eventually was forced to punt to the Hilltoppers 11-yard line.

Pigrome found junior wideout Craig Burt Jr. for 13-yards to begin a promising drive. Despite the veteran signal caller completing seven of his 10 passing attempts for 60-yards, WKU could only get to the Owls 32-yard line.

The Hilltoppers kicker Narveson was set up for a 50-yard field goal try, but the kick went wide right to keep the game scoreless. Narveson’s kick was his first missed field goal of the season, going six for six before the error.

After another quick stop from the WKU defense, the Hilltopper offense moved quickly back into FAU territory.

Right before the end of the first quarter, the Hilltoppers converted on fourth and one thanks to a 13-yard run from senior running back Gaej Walker. WKU would start the second quarter with the ball at the Owls 34-yard line.

Starting the second frame FAU’s defense stopped the Hilltoppers from scoring by pushing them back to the Owls 41-yard line to force a punt.

FAU got their first productive pass play of the game halfway through the second quarter, when Tronti completed a pass to graduate receiver T.J. Chase for 26-yards.

The big pass play didn’t amount to anything though, as back-to-back sacks from the WKU defense forced a third straight punt from the Owls.

Everything looked to be trending towards a quiet end to the first half, until FAU decided to try and convert a miracle last play at the Hilltoppers 49-yard line to put them up going into the half.

The Owls were stopped at the 16-yard line, but at the end of the play there was some pushing and shoving from both teams that led to a punch thrown by senior linebacker Kyle Bailey. Bailey was ejected at halftime but later reinstated upon further review.

The second quarter fight put an end to the first half, with both squads knotted up at zero.

Both teams combined to gain 273 total yards in the first 30 minutes of play, yet neither offense allowed any turnovers.

“I don’t really think they did anything special,” junior wideout Mitchell Tinsley said on the FAU defense. “I just felt like we didn’t capitalize, had receivers, we had some dropped balls. I think we could have just finished out drives.”

Tronti and Chase matched up very well on the offensive side for the Owls, connecting on three passes for 47-yards.

The first points of the game were scored with just under 10 minutes left in the third quarter. Redshirt kicker Vladimir Rivas booted a 40-yard field goal to put FAU up 3-0

The FAU field goal woke up the Hilltopper offense a little bit, driving 61-yards down the field after the Owls took the lead.

The 13-play drive led to a 32-yard field from Narveson, and in a matter of minutes it was all tied up again at three.

WKU forced the Owls to go three and out on FAU’s next offensive drive, giving the ball to the Hilltoppers entering the final frame.

WKU drove 36-yards to get into FAU territory to begin the fourth quarter, but was forced to punt to the Owls’ seven-yard line.

Desperately needing a spark, FAU head coach replaced Tronti with Posey. After generating 40-yards, Posey was picked off by Bailey to give the Hilltoppers great field position at the Owls’ 37-yard line.

The 24-yard return from Bailey set up a 49-yard field goal for Narveson, which gave WKU their first lead of the game at 6-3 with 8:09 remaining in regulation.

Posey and the rest of his offense responded immediately by getting into the red zone with four minutes left. Once in the red zone, the Hilltoppers forced a fourth and one situation that the Owls decided to go for.

A one-yard run from senior running back B.J. Emmons converted the fourth down conversion, which led to an even bigger play for FAU.

On the very next play, Posey scurried his way into the endzone to put the Owls back on top 10-3 with 2:27 remaining. The Posey touchdown run was the first touchdown score of the game for both sides.

With one more drive to try and steal the game from FAU, the Hilltoppers couldn’t get anything going. WKU went four and out, turning the ball over on downs at their own 22-yard line.

A first down run from Emmons iced the game for the Owls, handing WKU their third straight loss on the season and Helton’s first losing season as a head coach.

Posey finished his phenomenal fourth quarter performance with 60-rushing yards on nine carries to add to his touchdown run. FAU also got nice production out of their two main running backs in Emmons and senior James Charles, who combined for 109-yards on the ground.

Pigrome gave his team 163 passing yards on 39 passing attempts, while Gaej Walker ran for over 75-yards with his 78 against the Owls. The Hilltoppers struggled heavily on third down, going seven for 17 in that category.

“You can’t dwell on the past,” redshirt junior defensive end Juwan Jones said. “The last three games it’s three opportunities to put your best self on tape.”

The first of the final three games for the Hilltoppers will be against Southern Mississippi (2-5), (1-2, C-USA) on Nov. 14 with a 5 p.m. kickoff. The next two out of three games will be played in Houchens-Smith Stadium.