WKU shifts gears for FAU, aim to get back on the winning side 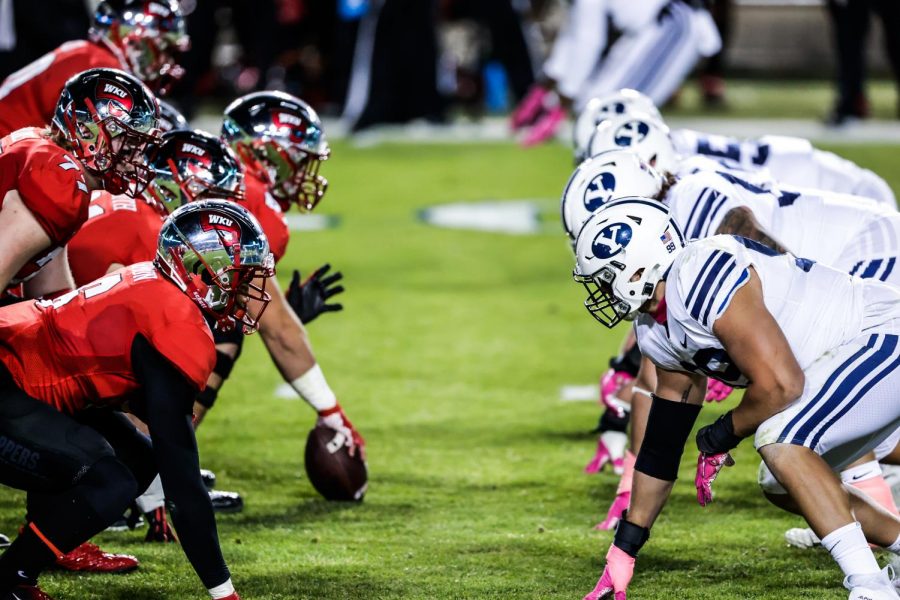 WKU and BYU lines up at line of scrimmage in second quarter. BYU played Western Kentucky at LaVell Edwards Stadium in Provo, Utah on Oct. 31, 2020.

Wilson got some help from his reliable sophomore running back Tyler Allgeier, who ran for 95-yards to add to a touchdown carry.

“They had a good playbook and scheme,” senior defensive back Dionte Ruffin said. “They know they’re good at what they run, and they’re gonna run what they run.”

Like BYU, the Hilltoppers got valuable production from their lead running back senior Gaej Walker, rushing for 75-yards on 17 carries.

WKU will hit the road again this Saturday for a Conference USA matchup against last year’s runners up to the C-USA championship in Florida Atlantic (2-1), (2-1, C-USA).

The Owls have wins against Charlotte and the University of Texas-San Antonio, with their only loss coming to No. 16 Marshall University. Three of FAU’s games this season have been postponed due to COVID-19 complications.

“We’ll have a big challenge on our hands but the guys are excited to have another conference opponent to play,” Helton said in Monday’s press conference. “We’ll try to get back on the winning track and get momentum in conference.”

FAU will rely heavily on their rock solid defense against the Hilltoppers, which ranks second in C-USA in points allowed per game (13.3).

For the offense, the Owls turn to their junior quarterback Nick Tronti, who has thrown for 382-yards and three touchdowns in his three starts this year.

“Their quarterback is really talented, he can run with the ball really good,” Helton said. “It reminds me of the Middle Tennessee mindset, we have to be able to control him and not allow him to make big plays.”

Kickoff is scheduled for 5:00 p.m. CT at FAU Stadium in Boca Raton, Florida.

BYU didn’t miss a beat on offense in the first half of Saturday’s game, scoring on all five possessions to help them get out to a huge lead at the half.

Within the first five minutes of play, Wilson led his team 75-yards down the field on 10 plays to get into the endzone by way of an Allgeier two-yard run.

BYU was right back at it after the Hilltoppers freshman kicker Brayden Narveson hit a 44-yard field goal to make it a 7-3 score. Narveson’s kick improved his perfect kicking season, and is now six for six on the year.

Another 75-yard drive, which ended in a touchdown pass from Wilson to junior wideout Dax Milne, increased the Cougars lead to 14-3 to end the first quarter.

To begin the second quarter, Wilson got a touchdown run of his own on a five-yard carry to make it 21-3. After that, the rest of the half was plagued by penalties for the WKU defense.

Targeting on senior linebacker Devon Key, which caused Key to be ejected, and pass interference on sophomore defensive back Beanie Bishop gave way to BYU getting into the endzone for a fourth straight possession. Wilson completed a 42-yard pass to junior running back Lopini Katoa to move the deficit to 28-3.

An unnecessary hit from redshirt junior defensive back Dominique Bradshaw and facemask on redshirt freshman defensive tackle Ricky Barber once again allowed for the Cougars to get into the endzone. BYU capped off their offensive first half with a 4-yard touchdown pass from Wilson to freshman tight end Isacc Rex.

Heading into the locker room, the Cougars had a 35-3 lead and the Hilltoppers had given up 71-yards on seven penalties.

“We had penalties that were unlike us. I was a little disappointed in that,” Helton said.

“We had two third down stops defensively and then we had two penalties, so that was dissapointing.”

There were no drastic changes in the second half, other than WKU finding a way to out score BYU 7-6.

The Hilltoppers got their only touchdown of the game on a three-yard touchdown pass from Pigrome to sophomore tight end Joshua Simon that occurred towards the end of the third quarter.

It just feels like sometimes you got guys making little mistakes,” junior lineman Mason Brooks said. “It costs four, five yards, which seems like a small deal but those add up.”

The Cougars got their six points by way of the leg, as sophomore kicker Jake Oldroyd booted a 49 and 45-yard field goal in the fourth quarter to cap the scoring at 41-10.

With four games remaining on the schedule for WKU, the Hilltoppers now face the reality of having a losing season if they fail to conquer the Owls next weekend.