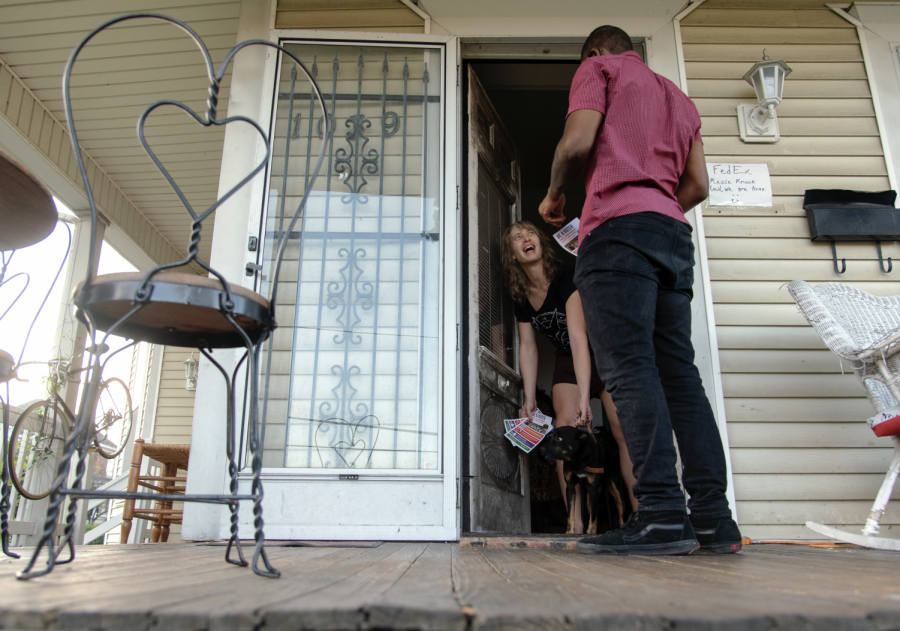 Derik Overstreet stopped by at the house of his friend, Chick Falcon, and gave them a few flyers with reminders highlighting when Election Day is and how to register to vote, on September 20, 2020, while canvassing with the Southern Kentucky branch of Kentuckians for the Commonwealth to promote voter empowerment.

Having an election during a pandemic creates difficulties for candidates to effectively campaign in traditional ways. Each candidate has to find new creative ways to reach out to voters. There has been less of a focus on door knocking and more attention to a candidate having a social media presence.

Amy McGrath, the Democratic candidate for the U.S. Senate, mentioned how COVID-19 has impacted her campaign for the 2020 Senate race.

McGrath also mentioned that a majority of her campaigning is done online, since it’s harder to plan things in person.

“We don’t do a whole lot of big rallies,” McGrath said. “We do everything outdoors. But I’m still trying to meet people where they’re at, so I’m doing a lot of online. [I’m doing] Zoom calls and Facebook Lives and things like that.”

She has also been working with other local politicians to discuss issues virtually with citizens.

“We do a ton of this Instagram and Facebook Lives,” she said. “We’re doing Telecom, we just did a telephone call [Oct. 7] with Representative [Charles] Booker talking about things like voting and how we tackle racial justice in this country, and John Yarmuth talking about the kind of aid that we need right now.”

Tom Morris, a Democratic write-in candidate for mayor of Bowling Green, shared how he has been campaigning during COVID-19. Morris has been practicing social distancing guidelines while door-to-door canvassing.

“We were hesitant for a long time to do door-to-door canvassing,” Morris said. “So two or three weeks ago, I tried it with the mask on. I’ll ring the doorbell and stand way back. I try to be very careful not to get within six feet of anyone, but a lot of people are more than willing to talk. I think it’s forcing us to use their means of communicating more. The experts say that door-to-door face-to-face contacts are always the best.”

Morris also mentioned that he and his team have reached out to people through phone banking and hand- written postcards.

“We knew from the beginning that we were gonna have to do a lot of out- reach,” he said. “So we’ve been phone banking a lot, and I’ve really focused on social media. The other thing we’ve done is a postcard campaign. We have sent around 4,000 handwritten postcards to potential voters.”

Social media has been the main way that Morris has gotten the attention of younger voters, and he describes how useful it has been for his campaign.

“The main way to reach out to younger voters on social media,” He said. “We’ve also got a Twitter account. But that’s not as much a part of our strategies as Tik Tok and Instagram. We’ve gotten quite a few supporters in the 18 to 29 demographic.”

Francisco Serrano is running to be one of the city commissioners for Bowling Green. He would be the youngest and first Latino to ever hold the position.

Paul Francis Wilson is Serrano’s campaign manager. Wilson is a 2019 WKU alumnus who has worked on over 30 campaigns. Both Wilson and Serrano have been committed to campaign in the safest way they could.

“We knew that the pandemic would set a new tone for us,” Wilson said. “And so from day one, we had some commitments, and that would be we would be wearing a mask the whole time. And we would not be putting our volunteers in danger, or in a weird health circumstance that we would get tested regularly as campaign managers [and as a] candidate.”

Wilson also mentioned the campaign team’s efforts to avoid door knocking as a way to campaign.

“We’ve kind of made a soft pledge not to knock any doors too, which is a massive deal, considering that that’s usually where campaigns are won.” Wilson said. “And we’ve only knocked a few doors, and been very very safe, so that’s something to brag about.”

Serrano’s team had a large focus on utilizing social media to campaign, and Serrano currently has a large social media presence as the election is getting closer.

“Knowing from day one that we were going to do digital, we decided to do it early,” Wilson said. “Get in early [on digital platforms] and start to talk to real folks with real problems, just like us on the ground. And we have the biggest social media following for any city candidate in South Central Kentucky. And we have a massive presence and we have also brought in a lot of really interesting voices on digital on Facebook Lives weekly with community leaders.”

Wilson also discussed the impact that social media has had on Serrano’s campaign for city commissioner, specifically in comparison to the other candidates.