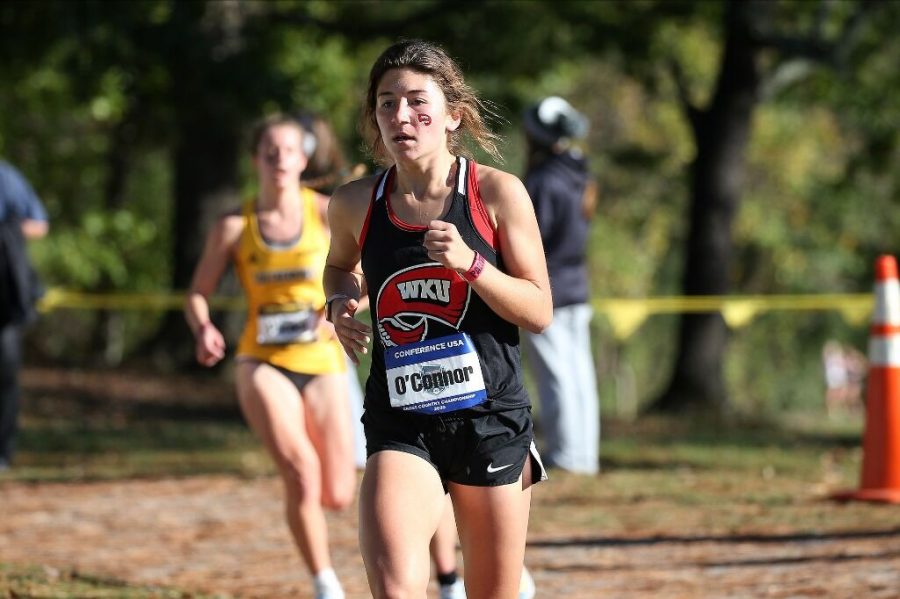 Freshman Rory O'Connor running in the C-USA Championship on Oct. 31, 2020.

WKU’s men’s and women’s cross-country teams have ended their 2020 fall season following the Conference USA Championships in Hoover, Alabama on Oct. 31. The men’s team finished at No. 6 of 11 and the women’s team placed at No. 11 of 12.

Junior Emerson Wells led the way for the men’s team finishing at No. 21 with a time of 25:13 in the 8K race. Wells was named Third Team All-Conference following the end of the event.

“Coming into this season that was clearly something in my head as a goal I wanted to achieve,” Wells said. “It’s good to know that I had that measure goal in front of me as I was building up through other races.

Wells did not run in the most recent indoor season due to a foot injury but COVID-19 has allowed the junior to prepare for the fall and come back stronger.

“More than anything it’s a relief to know I have that and I’m happy about that,” Wells said. “There is a lot of room for improvement because I still don’t think I performed the best way I could have at conference.”

Head coach Brooks LeCompte expressed the work ethic of Wells and what he brought to the table this fall prior to his final year on the Hill.

“Once he got back on campus, Emerson was getting it done. He always shows up no matter the situation, he’s the one guy you can count on,” LeCompte said. “He leads by example for the most part and on race day he’s going to get it done when it matters most and I think he showed that.”

Freshman Rory O’Connor took charge for the women’s team finishing at No. 36 with a time of 23:04 in the 6K race. O’Connor last ran in competitive cross-country in eighth grade before coming to WKU and walked on to the program via an email to LeCompte.

“I’m pretty happy with how I did. In conference I didn’t place as high as I was hoping but I think I was excited with my time since I did drop a spot since my last 6K,” O’Connor said. “I felt a lot better about coming into this race than I did the last one.”

O’Connor is a native of Mount Washington and attended Bullitt East High School before making her way to WKU for her first year of college.

“It was really nerve wracking at first because I had never raced before but the feeling of racing is so much fun,” O’Connor said. “I am so glad that I came here cause I found my passion and it is so great.”

This fall season was LeCompte’s first with the program and got a feel where both teams are headed following the conclusion of the C-USA Championship.

“It went pretty well but not as well as would’ve liked it to go. I think as far as the women’s side goes we did deal with some injuries,” LeCompte said. “Things for the men went a little better overall, but on both ends we were missing some depth there that we’re hoping to work out here in the next year or two.”

The future is bright and according to LeCompte his team is getting closer to the goals they want to establish moving forward.

“I feel like I did fairly well, I would say like a B minus. I think there is a lot of room to grow for myself as a coach,” LeCompte said of his fall season. “As far as starting back in the summer until now has been the hardest I have worked as a recruiter in my entire coaching career.”

The WKU track and field schedule has yet to be released and LeCompte is poised to get back in action for the next season.