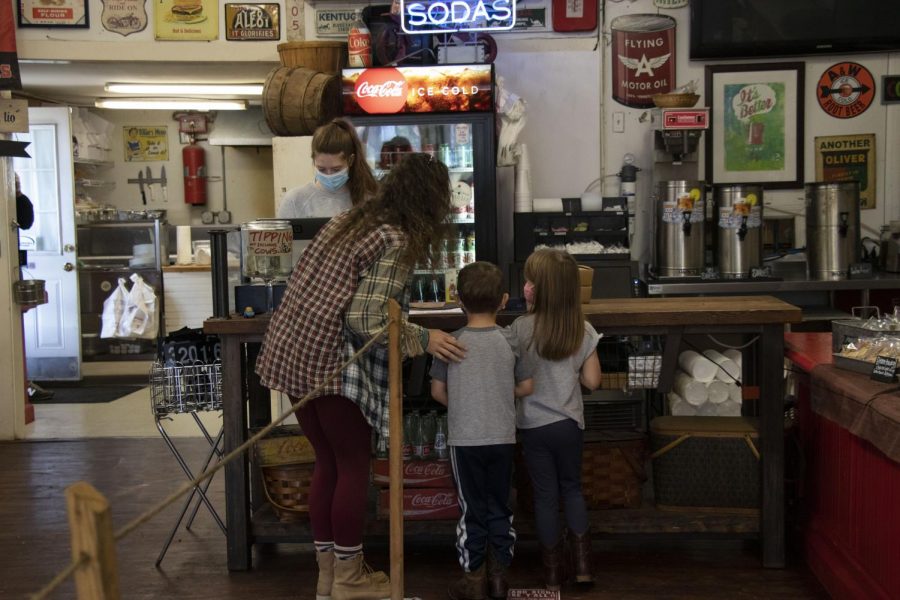 In Alvaton off Woodburn Allen Springs Road, the Boyce General Store can be found just 16 miles away from WKU. The rustic building built in 1869 still stands, now owned by Brad and Brie Golliher.

The couple purchased the building in 2012 for Brie Gohlliher to bake out of and announced that starting on Nov. 1 Boyce would be open only on Saturdays from 8 a.m. to 12 p.m.

“Up until this year, we were open Tuesday through Saturday, breakfast and lunch,” Brie Golliher said. “We did events on the weekends, we had private parties, we had all kinds of crazy things, but now we aren’t doing those things.”

Due to COVID-19 the business has seen sales down 40% from the previous year. The Gollihers confirmed that the renovated horse trailer which turned into the Cutie Pie Wagon is being used to sell pies.

“This transition is an effort to get back to our roots and for us to refocus our original goal of providing the community with delicious, fresh, homemade from scratch treats made just like gr’ma’s,” Boyce General Store said in an email.

Brad Golliher is a Hilltopper graduate from the class of 2006 with a major in advertising and graphic design. Brie Golliher also graduated from WKU in 2007 with a major in photojournalism and textiles.

“We do use our degrees in the restaurant business,” Brie Golliher said. “We have a different edge than probably a lot of other business owners because we can do advertising, photos and design stuff.”

With degrees being an advantage for the Gollihers, the business doesn’t have to worry about hiring an outside source to advertise and maintain an online presence.

Brad Golliher designs what his wife asks of him and said that his deadlines are usually a next day turnaround.

“I know when I ask him to do some- thing that thing usually only takes about 10 minutes, he just leaves it in his inbox for a long time,” Brie Golliher said.

The family also consists of two sons who are part of the business as well. Brady Golliher, 12, is in the sixth grade while his little brother Bryce, 9, is in third grade.

The Boyce boys & balancing a business

Two years prior to the COVID-19 pandemic the two sons were being homeschooled which was a decision the Gollihers thought was the right choice at the time.

“He took over as editor of Bowling Green Living magazine, and then now he works as the creative director at VIP magazine in Bowling Green, still working at home,” Brie Golliher said.

Brad Golliher said that Bryce had some behind the scenes problems, so it was decided last fall to put the boys back in school.

“They went back to public school last fall, and then six months later here we are homeschooling them again,” Brad Golliher said. “It’s been easier for us than it has been for a lot of other people because we did homeschool before.”

Both sons sat in the back of the car during the interview nodding in agreement that being online is preferred over learning in person.

“Not being the teachers has been a blessing,” Brie Golliher said.

The pandemic has caused a ruck- us for small business owners, and the Boyce General Store is no different. The Gollihers had updated seating prior to when the virus arrived.

“That’s the biggest joke of 2020, we finished about two weeks before the shutdown,” Brie Golliher said.

The online presence of the business benefited Boyce once the virus made it to Kentucky. Brie Golliher said she went into the store and made survival boxes and started shipping those out.

“That was a really big blessing as far as allowing some revenue goes,” Brie Golliher said.

The hardest part amid the pandemic for the Boyce General Store has been keeping staff.

“We’ve only been doing Friday nights and Saturday’s because I have high schoolers that work for me,” Brie Golliher said. “Another thing is unemployment and everyone wants to be on it, it’s hard to find an employee. That’s been the biggest battle of them all.”

Prior to the pandemic the Boyce General Store was open Tuesdays through Saturdays 7 a.m. to 2:30 p.m., and Friday nights the business would close at 8 p.m.

After having to reduce hours and not hav- ing customers temporarily, Brie Golliher said that fish frys have been the most sought after carryout items on Fridays, and on Saturdays it’s been breakfast and burgers.

The Pie Queen is what Brie Golliher originally wanted the Boyce General Store to be, but it instead became a local restaurant that also has pies to dive into in addition to burgers and fish frys.

“My top seller is my Kentucky pie, which is a chocolate chip bourbon pecan pie,” Brie Golliher said. “After that is my Nest that has the coconut macaroon crust with a fudge filling, and then the coconut creme pie which is the best seller in the store itself.”

Bryce, along with his brother Brady, provide a helping hand when it comes to their mother the Pie Queen and dish out the award winning pies.

“Bryce likes to bake in the Pie Queen with me, and Brady is the super foodie,” Brie Golliher said. “They both help us create our burgers of the month every year.”

All hands are on deck for the Golliher family as the business is in full force and the more hands the better when it comes to serving customers.

“I work every Friday,” Brady said. “I make drinks, that’s it. I also help hand out coconut pie, that’s how I know it’s one of the top sellers.”

Over the course of its 151 year existence, the Boyce General Store has had its fair share of renovations. The Gollihers have renovated something at the store each year since taking over eight years ago.

“We don’t want to change it so much that people don’t recognize it anymore and it’s not too modern,” Brad Golliher said. “It kind of brings back a lot of memories for some people and the people that grew up in the community. It’s an important place to them.”

Before the Gollihers become the owners of the Boyce General Store, the food was frozen or just deli sandwiches. The family spent the first year and a half trying to make the partnerships with all of the Kentucky farms that they could.

“We hand batter and cut our own chicken tenders, we get all of our beef from Downing Cattle Company, we get tenderloins and sausage from Kirby and Poe, we use local eggs, we use Chaney’s Dairy milk,” Mrs. Golliher said. “We have a Kentucky Proud grant that allows us a little more flexibility to spend money on Kentucky Proud items.”