Third party candidates present options outside of Democrats and Republicans 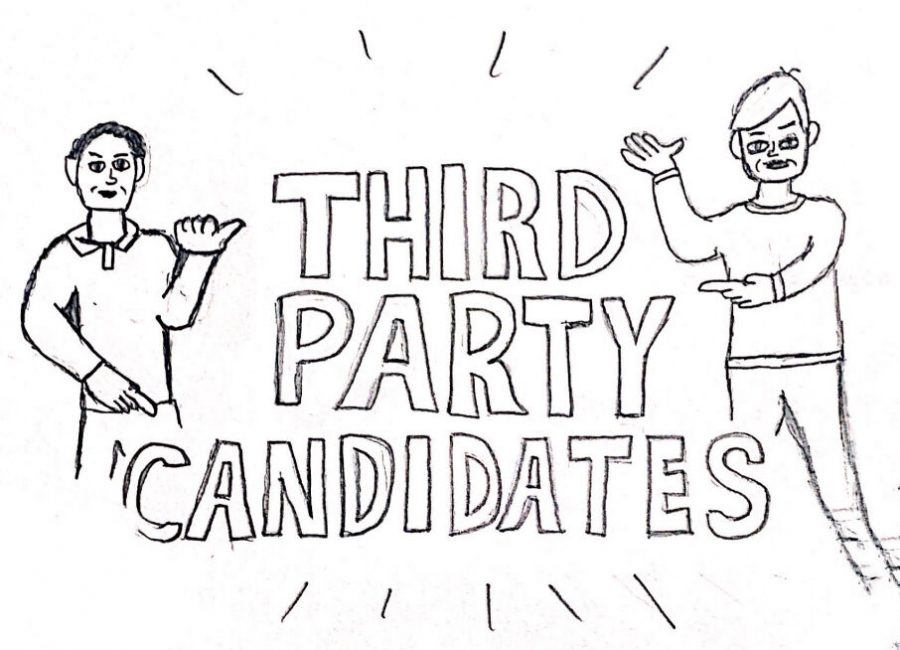 Election day is coming up, and the deadline for picking a candidate is getting closer.

There is no denying this is a very contentious election, and it’s evident that the undecided voter population is much larger than it usually is, although it is smaller than the 2016 group.

“Third parties” are political parties that are different from the two dominating parties in American politics, Democrats and Republicans. There’s more support for third parties whenever there is an election where the Republican and Democratic candidates for president don’t have a vast majority of support from their parties.

While the Democrats and Republicans compete to sway the undecided voters, some of the biggest third party candidates, whether they are Libertarians, Greens or independents, are rising to the forefront.

On with the local level, Leanette Lopez is running for state legislature in District 20 against incumbent Patti Minter.

Lopez’s main points of issue are pushing for COVID-19 relief bills, reducing civil liability for small businesses and ensuring funding for the large Medicaid population, according to her website.

Lopez is motivated to represent the values of her community as a state legislator.

Lopez is running as an independent, meaning that she is not attached to one of the major parties or any smaller parties.

This is common practice for candidates attempting to convey bipartisanship, something that Lopez emphasizes on her website.

The Libertarian Party promotes civil liberty, non-interventionism, “lais-sez faire” capitalism and increasing limitations to government, according to its website.

Perry said his motivation to run was sparked by a libertarian desire for freedom from the grip of the two-party system in the U.S.

“Robert’s disdain for our ‘two-party’ system and its encouragement of fear and envy has driven him to action,” according to Perry’s website.

Most of Perry’s solutions to his plat- form’s biggest issues involve lessening government intervention on multiple fronts, allowing for a freer society.

Libertarian candidate Brad Barron is running against Mitch McConnell and Amy McGrath in the Kentucky race for U.S. Senate.

Barron’s main platform issues are a right to self-defense, bringing troops back from foreign wars, government accountability and anti-abortion.

According to his website, “Brad’s stance is that the function of Government is to protect the rights of the individual.”

For the upcoming presidential election, the only third-party candidate that is on the ballot in all 50 states is Libertarian candidate Jo Jorgensen.

Jorgensen plans on breaking many records, hoping to be the first female president and the first third-party president.

Jorgensen is a psychology professor at Clemson University, and a lifelong member of the Libertarian party, registering as Libertarian in 1983.

Like most Libertarian candidates, Jorgensen takes pride in being another option for those dissatisfied with the Republican and Democratic candidates.

“I would rather die fighting for liberty than live voting for tyranny,” Jorgensen tweeted on Oct. 30. “#votegold if you want to see a real change by real people for real people.”

Jorgensen also aims to relieve government barriers on replacing fossil fuels with sustainable energy, as well as pulling the U.S. military out of foreign wars, according to her website.

Although he is not on the ballot in all 50 states, Green Party candidate Howie Hawkins would be the next biggest third-party candidate for president.

Hawkins is a co-founder of the Green Party, which is mainly concerned with environmental issues, social justice and grassroots democracy.

Hawkins main goal for running is to “build the Green Party as an activist and viable opposition to the two-capitalist-party system of corporate rule,” according to his website.

As for his platform, Hawkins is motivated by the worsening environment as well as economic and racial justice.

“I have decided to run because so many Greens and independent progressives and socialists have urged me to,” Hawkins said on his website. “We have conceived of a campaign designed to grow the Green Party rapidly as we move into the 2020s and provide real solutions to the climate crisis, the new nuclear arms race, and ever-growing economic and racial inequality.”