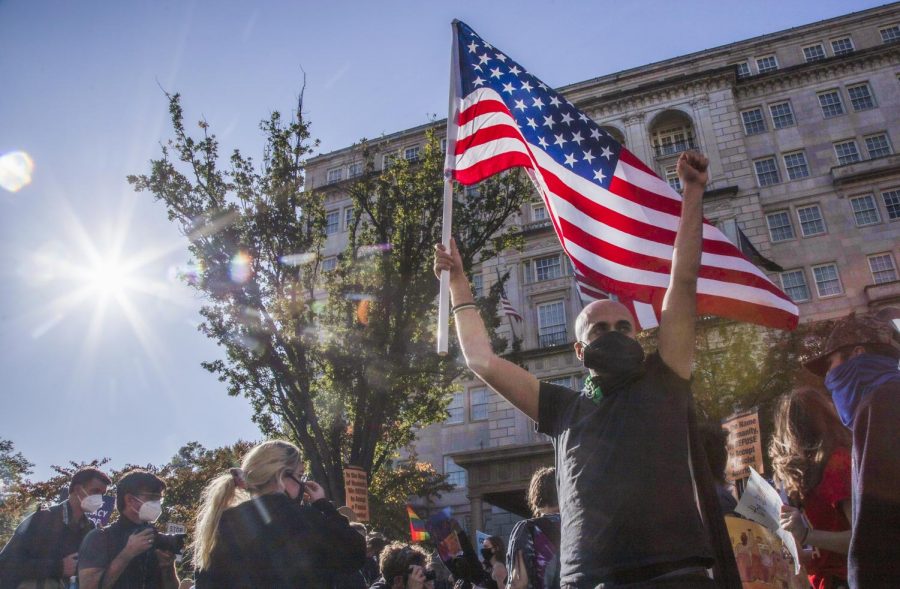 Protesters march down Black Lives Matter Plaza coming from McPherson Park for the Count Every Vote rally that ended with an organized march on November 6, 2020 in Washington, D.C.

Tensions rose in Washington, D.C. and the nation held its breath as every ballot was counted in the 2020 presidential election.

In these unprecedented times, the 2020 presidential election was bound to be unlike anything that’s transpired in American history. The nation’s capital was full of multiple perspectives and had different groups of people exercising their First Amendment right. On Black Lives Matter Plaza in downtown Washington D.C., protesters projected their support of the BLM movement, Christian protesters expressed that “Jesus Saves” and the opposition combated those stances. President Donald Trump supporters argued for “legal votes” to be counted outside the Republican National Committee building while claiming that the democrats were committing voter fraud. In McPherson Park, rallies were thrown in support of counting every vote and that every vote mattered. As the week came to a close, media outlets said presidential candidate Joe Biden pulled ahead and announced that he was the winner on Nov. 7. The majority of protestor at BLM Plaza celebrated that Donald Trump would no longer be in the office.

“There is still a fight that needs to be fought,” said Aniyah Vines, founder of the Live Movement and Howard University’s NAACP President. ”We are fighting for racial equity, education equity. Health is not viewed as a human right…We the people need to make sure whoever holds office needs to be held accountable.”