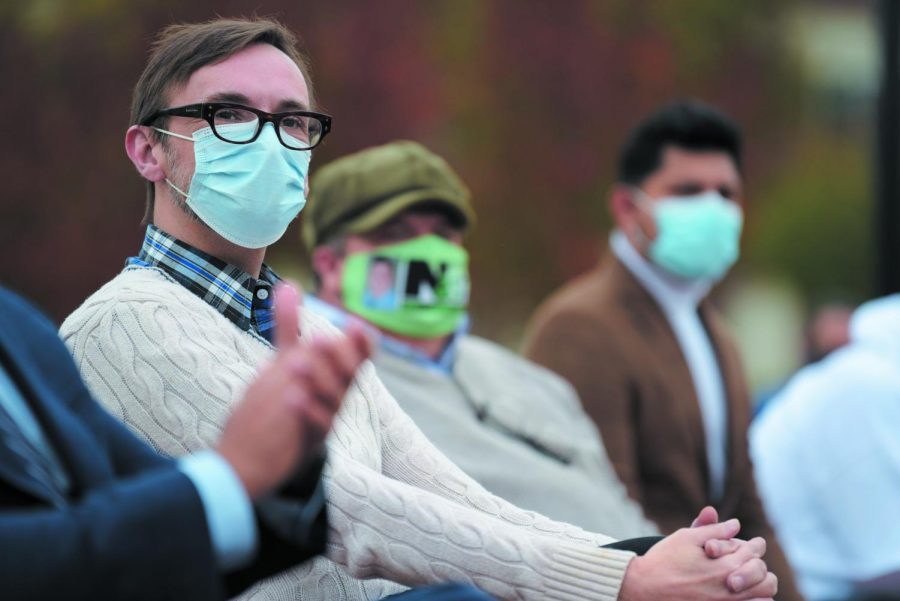 Paul Carter, a cashier from Scottsville, is running for Bowling Green City Commission this upcoming election.

This is Carter’s second time running for this public office.

Although city commission candidates are not required to run on any political platform, Carter considers himself the “radical left” candidate during this election cycle. He said that his political position is what sets him apart from all the other candidates, as well as his income, and he does not engage in political fundraising.

“I am a poor person. I’m doing this on my own,” Carter said. “I don’t want to coach what I’m saying based on my funder’s expectations.”

Carter said his interest in local politics started in college and continued as he moved around the country.

“When I was in college, I volunteered for Peace not Bombed, and was a part of protesting the war in Iraq and the USA Patriot Act,” Carter said. “These things cumulatively got me interested in local politics.”

Carter said housing and helping homeless people in Bowling Green, a demographic which has “grown exponentially,” would be one of his main focuses as commissioner.

“The last time I ran for office was in 2018, there were 200-something homeless people in Bowling Green, and that number has doubled,” Carter said.

Carter proposed that Bowling Green implement a pilot rapid re-housing program. He acknowledged that a homeless population of 400 may sound like a small number, but he said it’s a number that will grow.

Carter said that he supports improving the conditions in Black and brown neighborhoods across Bowling Green, as well as implementing rent control and stabilization measures. He said these actions should help the issues of people being displaced and minimizing gentrification.

Carter’s plans to improve neighborhoods include “putting in sidewalks and grocery stores into areas that are currently food deserts.” A food desert is an area that has limited access to stores with affordable and nutritious food.

Carter said the Fairness Ordinance is also an important issue that he wants to address.

“I am passionately in favor of the Fairness Ordinance,” Carter said. “Especially considering my focus on housing.”

Carter emphasized that it is currently legal to displace an LGBTQ person in Bowling Green based on their sexuality, which is one reason passing the Fairness Ordinance is so important to Carter. He is also the first openly queer person to run for city commissioner.

He said that as a queer person himself, he is well aware of queer erasure throughout history.

“I came out as queer in 1996 in Scottsville, which was not an easy thing to do,” Carter said. “I considered that a deeply political act. That burden is going to be easier for the next person who comes out. ”

Although getting out during the COVID-19 crisis “scares the bejesus” out of Carter, he said he has attended and spoke at some Freedom Walkers marches.

Carter said that the policies he has proposed are “right in line with the BREATHE Act, which is a policy that has been sponsored by the Black Lives Matter movement on a federal level.”

Carter said that although Bowling Green doesn’t use no-knock warrants now, that doesn’t mean this will be the case in the future when there is a shift in leadership. He supports legislation banning no-knock warrants for this reason. He also supports disarming police officers.

“We can disarm the police,” said Carter. “What I mean by that is that we don’t have police officers carrying lethal weapons.”

He also said that he believes “justice is served in a courtroom, not on the street.”

Carter’s campaign has a big emphasis on social justice. He said it’s at the core of all that he does. He called this attitude “the politics of human dignity.”

“On a fundamental level, all of my policies are geared towards social justice,” Carter said. “I am geared toward addressing issues within queer communities [and] within Black and brown communities.”

Carter stated on Facebook Messenger that he wants Bowling Green to heavily invest in mass transit. He specifically named residential shuttle services as an example. He said that these services will reduce traffic and the city’s carbon footprint.

He added that city planning should be focused on walkability, with investments in sidewalks and mixed zoning so citizens have access to necessary business, such as groceries and pharmacies, in their own neighborhoods.

“By taking these steps, we reduce the need for parking, and strain on our automotive infrastructure,” Carter stated.

Carter wrote on Facebook Messenger he would support a ban on plastic straws and grocery bags. Carter supports investing in recycling and wants to work on banning single use plastics.

Carter said banning single-use plastics and investing in recycling programs is an important part of his platform.