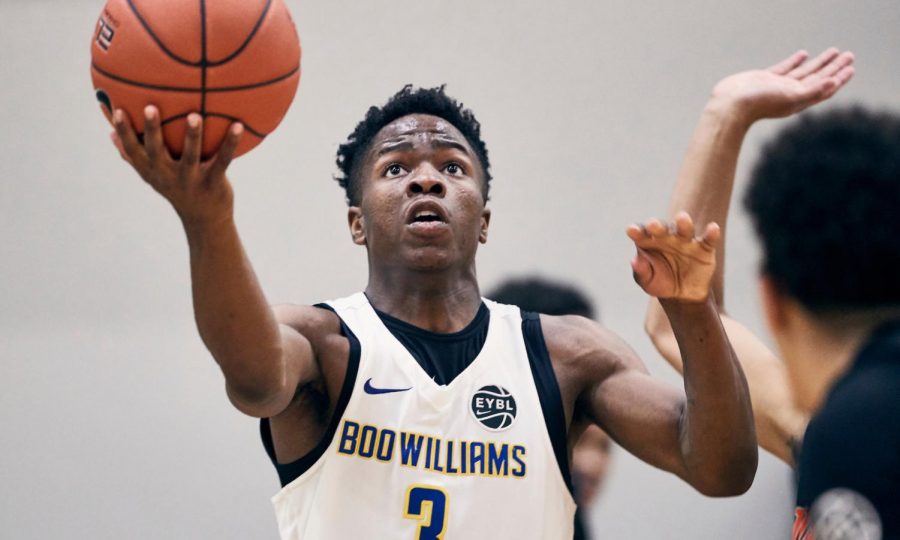 INDIANAPOLIS, IN- Saturday, May 11, 2019: Zion Harmon 2021 #3 of Boo Williams 17U attacks the rim at the Nike Elite Youth Basketball League (EYBL) session 2 at Pacers Athletic Center in Westfield, IN.

“It’s very obvious that Zion’s basketball credentials and accomplishments speak for themselves,” head coach Rick Stansbury said. “The thing that excites me the most about him is the work ethic and character that he has, and it starts at home with his father, Mike, who’s kept him grounded and instilled that work ethic.

The four-star recruit is ranked as the 20th-best prospect in the country and number four at the guard position by ESPN.

Harmon ranked sixth in the state in scoring as a junior, as well as ninth in 3-pointers made (95) and free-throw percentage (84.5). He helped Marshall County finish 23-11 and reach the First Region Tournament championship game.

The first-team All-State selection also received the honor as a freshman at Adair County High School, where he was named 2018 MaxPreps National Freshman of the Year. He averaged 32.7 points, 7.8 assists and 3.4 rebounds.

In eighth grade, he won a state championship in 2017 at Bowling Green High School. Harmon averaged 16.8 points in helping the Purples to a 36-2 record, including 18 points in the title game.

“There aren’t many kids who’ve worked harder. I’ve seen it since his eighth-grade year at Bowling Green under Coach Sherrill when he helped lead them to a state championship,” Stansbury said. “He plays for a great coach in Coach Birdsong now and one of the better programs in the state at Marshall County. We’re excited to have him come back to Bowling Green and join our family.”

Harmon has also competed for USA Basketball in recent years, winning a gold medal with the 2017 USA Men’s U16 National Team in the FIBA Americas U16 Championship.

Harmon will now officially join WKU for the 2021-2022 basketball season.