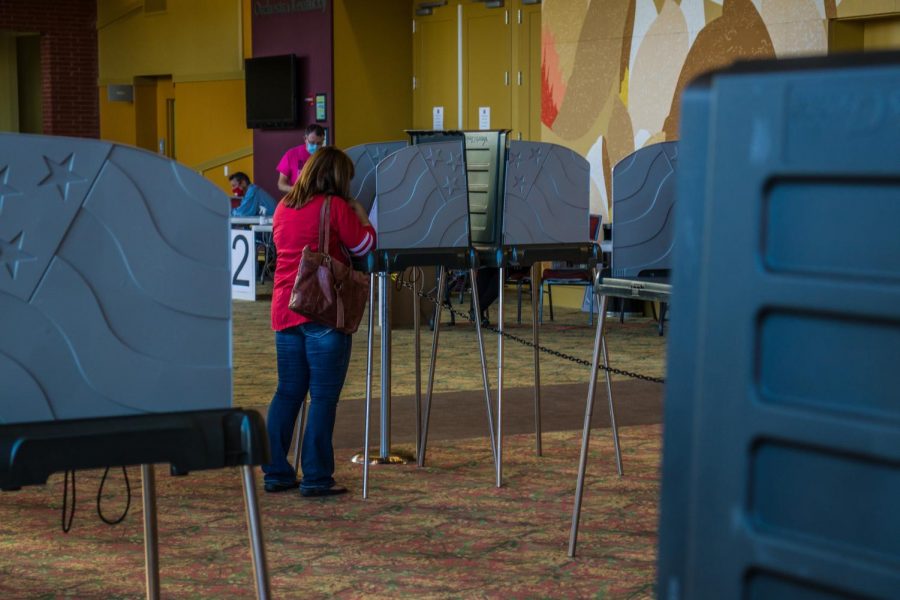 A voter at the poll during the early voting period in SKyPAC.

“Higher education, from trade schools to universities, must be made available to any qualifying student for free or for very low cost,” Linderman stated on his website.

Linderman believes the financing of education “must be cleared of predatory lenders.”

The website also states Linderman wants to expand public schools to provide childcare and preschool to all children regardless of income.

Guthrie reintroduced a bipartisan bill known as the Empowering Students through Enhanced Financial Counseling Act. The bill “would help student borrowers better understand their financial obligations,” according to Guthrie’s website.

Linderman’s website says his goals for America’s healthcare system are to significantly reduce costs and provide coverage for all Americans. Linderman is a proponent for single-payer “Medicare For All.”

Guthrie has led hearings on the resurgence of measles in the U.S. and the increase of insulin prices.

“I am hopeful that by looking at insulin as a case study, we can work with President Trump and tackle the overall rising drug prices in our country that are crippling patients at the pharmacy counter,” Guthrie stated on his website.

Guthrie also voted to repeal the Affordable Care Act in 2012.

Linderman is in favor of the legalization of marijuana. His website states legal cannabis and hemp would mean “new cash crop for farmers, new business opportunities for investors and business owners, and the possibility of new ways of treating pain without addiction.”

The website also states people of color are disproportionately punished for cannabis possession and legalization will “eliminate a significant piece of systemic racism.”

Guthrie has voted against several bills regarding legalizing cannabis, including the SAFE Banking Act of 2019, which allows banks to work with cannabis businesses that are legal at the state level. He also voted against preventing the Department of Justice from prosecuting cannabis users and businesses in states where recreational cannabis is legal.