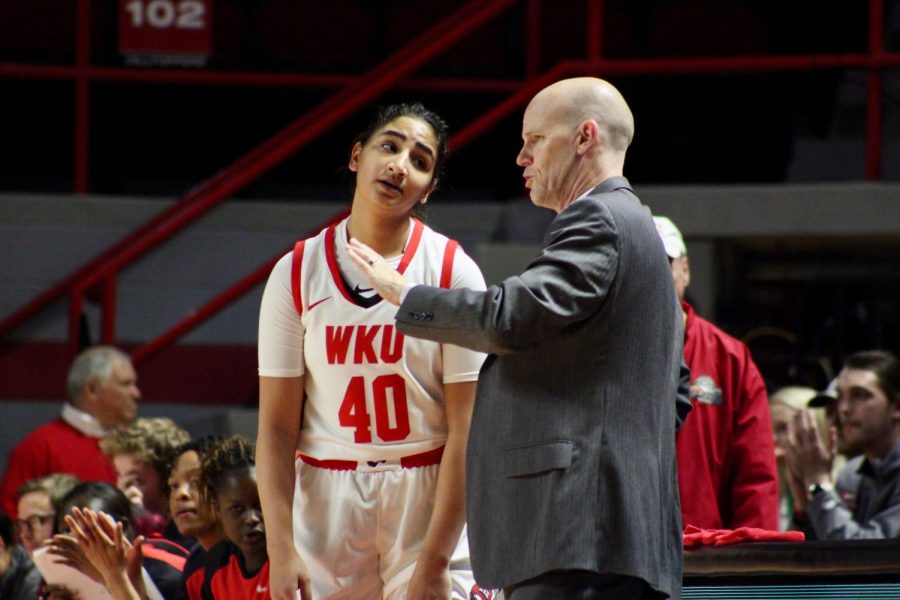 The WKU Lady Topper basketball head coach Greg Collins addressed the media on Monday prior to the first game of the season at the University of Tennessee.

In Coach Collins’ opening statement, he talked about how he is very pleased with the team’s overall health, team chemistry, and work ethic.

“We are looking forward to getting an opportunity to play, ” Collins said.

The last time the program took the floor was March 7 against Louisiana Tech University. Now the Lady Toppers will make their season debut in Thompson-Boling Arena on Saturday at 1 p.m.

Coach Collins said that he is looking forward to the challenges of Saturday’s matchup against the Lady Vols and that this first game in Knoxville is going to be a neat experience.

“I like starting off the season with a great opponent, ” Collins said. “We don’t prepare any different than we do anybody else.”

Collins said the team has been working hard on a number of different aspects of their game in practices and scrimmages to prepare for their season.

“We just started watching film on the Lady Vols recently,” Collins said.  “We’ve been preparing on really everything.  We’ve worked on everything from defense to fundamentals of passing, shooting technique, and everything on offense.”

The Lady Toppers head coach also addressed which players he expects to lead the charge in Saturday’s game.

Coach Collins also gave a brief update on senior Raneem Elgedawy and addressed if she would be returning to play this season.

According to Collins, Elgedawy is dealing with family matters, but is looking to return to WKU to play basketball.

“She’s still hopeful she’ll be able to rejoin the team at some point,” Collins said.  “When and if she’s able to rejoin us, we’ll be glad to have her back.”

Junior Meral Abdelgawad, who is a shooting guard from Cairo, Egypt addressed the challenges the team will be facing on Saturday and throughout the season due to the youthfulness of WKU’s roster.

“It’s challenging this year, we have six freshman – I’m trying to lead them,” Abdelgawad said.

“They are working hard. The six freshman, they are really working hard and they are ready for playing games,” Abdelgawad said about the newest additions to WKU’s roster.

Abdelgawad also talked about how she and the team have been preparing for their tough matchup against the Lady Vols.

According to Abdelgawad, she has been focusing on creating more scoring opportunities for WKU through rebounds.

“We’re really excited to play them,” Pouye said.  “We’re going to do our best, defending hard, getting rebounds, hitting some threes, whatever we can do to just win that game.”

Regarding Pouye’s performance, she claimed that she was working to improve on driving to the net and shooting three pointers, and she emphasized how important rebounding was as well.

WKU will tip off their season in Thompson-Boling Arena on Nov. 28 at 1 p.m.