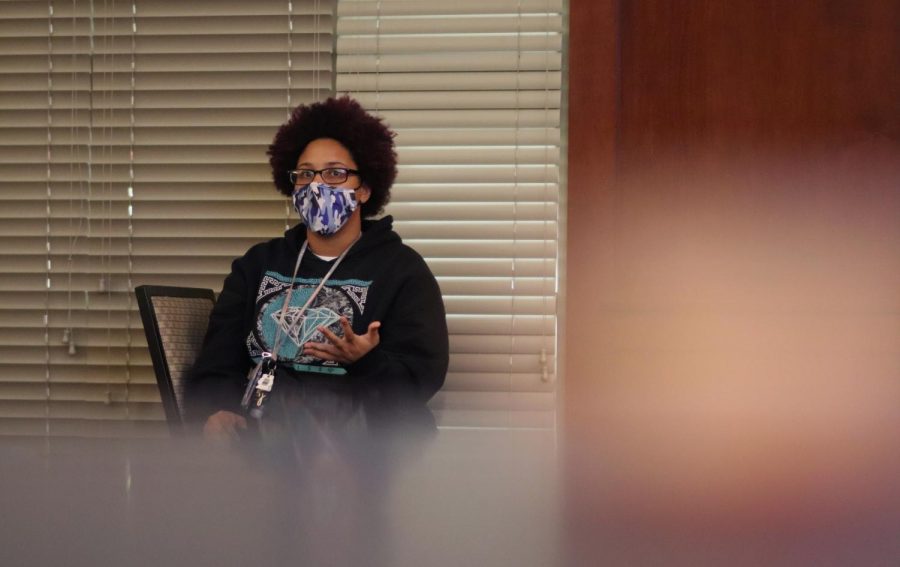 Keivonna Riley, a junior at WKU, speaks during a discussion about hip hop’s culture and impact on the black community during Hip Hop Monologues, an event held by Why Knot Us Black Male Initiative at Downing Student Union on Oct. 21, 2020.

Trenton Peyton, a graduate student from Glasgow, said the organization is looking to expand outreach to black students on campus who want to be involved with social change.

“We are striving to equip all of our black male students with the things they need to be successful during college and after WKU including professional development, academic support, social support and social engagement,” Peyton said.

The first meeting focused on how hip-hop has influenced black culture and social movements, especially during a year that has seen huge grassroots energy focused on bringing systemic change.

For example, Tupac’s song “Changes,” which was released in 1998, was examined to see how lyrics such as “I see no changes. Wake up in the morning, and I ask myself, ‘is life worth living should I blast myself?’” still apply to the political landscape today.

Other songs discussed were Childish Gambino’s “This is America” and Lil Baby’s “Chances.” Attendees talked about how these songs spotlight the opportunities that African Americans are left out of.

“I think black music is unique in itself, because a lot of times, we listen to African American music, there’s always a story behind it,” Davon Taylor, a sophomore from Louisville, said.

Taylor went on to say how songs like Kendrick Lamar’s “Swimming Pools” resonate with experiences felt by black people across the country.

“With the story behind these songs, the system isn’t treating us right,” Taylor said. “It’s something people can connect with.”

Members also discussed ways to foster unity among the black community when voices and opinions are so diverse.

“These events really bring us together and help us unite,” Keivonna Riley, a junior from Louisville, said.

One song discussed that highlights the different voices in the black community was J. Cole’s song “Snow On Tha Bluff” in which he criticized fellow artist Noname for her leadership on social change. He charged Noname for her poor leadership saying, “Instead of conveying you holier, come help us get up to speed.”

Riley said disagreement and conversations amongst black leaders are important, but sometimes can distract from the main goal.

“There is a time and a place, and I feel like in that specific instance with J. Cole and Noname, that should’ve been a private matter,” Riley said.

Riley emphasized the importance of organizations such as the Why Knot Us Black Male Initiative, because they allow for a productive dialogue that cannot be achieved elsewhere.

“I think a lot of times, these events help people understand different viewpoints, because often, when you’re with your friends, you don’t argue and you tend to disagree to disagree. But I think here, since it’s a professional environment, you get to sit and listen to what the other person is saying, and try to understand the other point of view,” Riley said.

Peyton said the next public meeting is this Sunday, Oct. 25 in the DSU auditorium at 3 p.m.