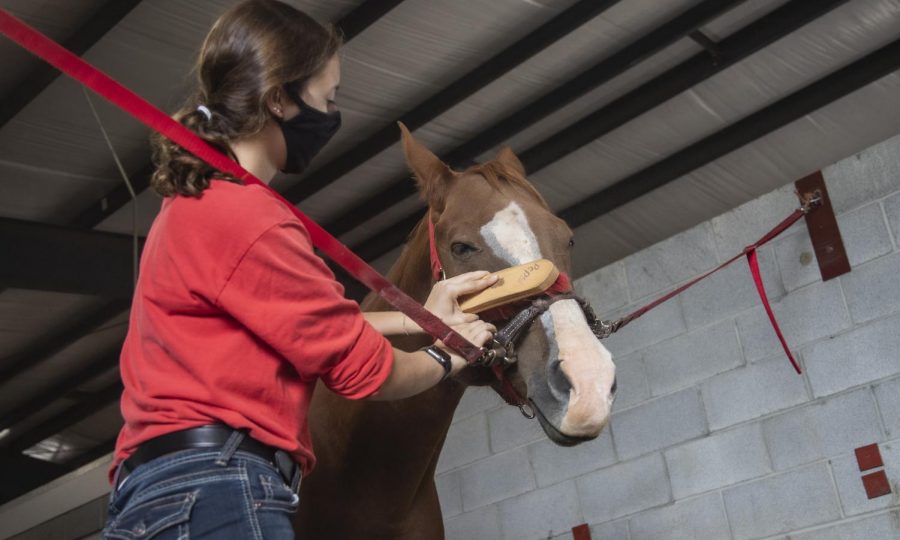 WKU’s equestrian team is back on campus with the second largest team in their region.

Jean attended WKU for her undergraduate degree, and during her time, she participated in the equestrian team. She wanted to bring it back to allow students to find the same community she did.

“When I think back to college, my favorite thing was the equestrian team,” Jean said. “I’m really excited we got it back going again, and I’m excited to make memories and give the girls something concrete to look back on and be proud of.”

The equestrian team is a Western-disciplined showmanship team, so their main focus is

equitation, position and control, all of which determine how the rider looks while on the horse.

Practices are Tuesday, Thursday and optional on Friday at the WKU Agriculture Research and Education Center, also known as the Ag Farm. WKU has 33 horses on the farm, which are taken care of by Jean and her students.

During practice, the team members ride different horses to prepare for the shows, in which they are given a random horse that they have to adapt to and know how to ride, while looking good doing it.

WKU junior Brooke Sullivan, who is majoring in agriculture with a concentration in equine science, said she came to WKU from Atlanta for the equine program and in hopes of joining the equestrian team. Sullivan said she feels empowered being on the team, and she is excited for the first show of the season, despite it being intimidating.

“You basically draw a horse out of a hat, get on a horse you’ve never ridden before, and you go into an arena and get judged with 10 to 15 other riders, and they place you based off how well you ride,” Sullivan said. “If you can’t control the horse, you’ll look messy and won’t place well.”

The shows are over a weekend and split into divisions. Riders can place 1st through 6th place and gain points that accumulate throughout the year. Jean said the riders are judged “primarily by how well the rider gets in tune with the horse, and second how well they control the horse.”

“I think that it’s a really great opportunity for people to learn about the equine program here at Western and for people to develop a lot of good friendships and relationships with people who are interested in the same things as each other,” Walters said. “It’s nice to not feel as alone as you did during quarantine or over the summer.”

Jean said she is happy to be able to provide her students with a social outlet where it is easy to stay distanced and stay healthy.

“The team provides students a mental outlet to destress and maintain mental and physical health during the very strange college experience COVID-19 has left them with,” Jean said. “It’s a great way to gain leadership skills through the club type of organization we have, and there are many opportunities to be competitive and grow individually through that and grow as a team within our region.”

Maggie Thornton can be reached at [email protected]