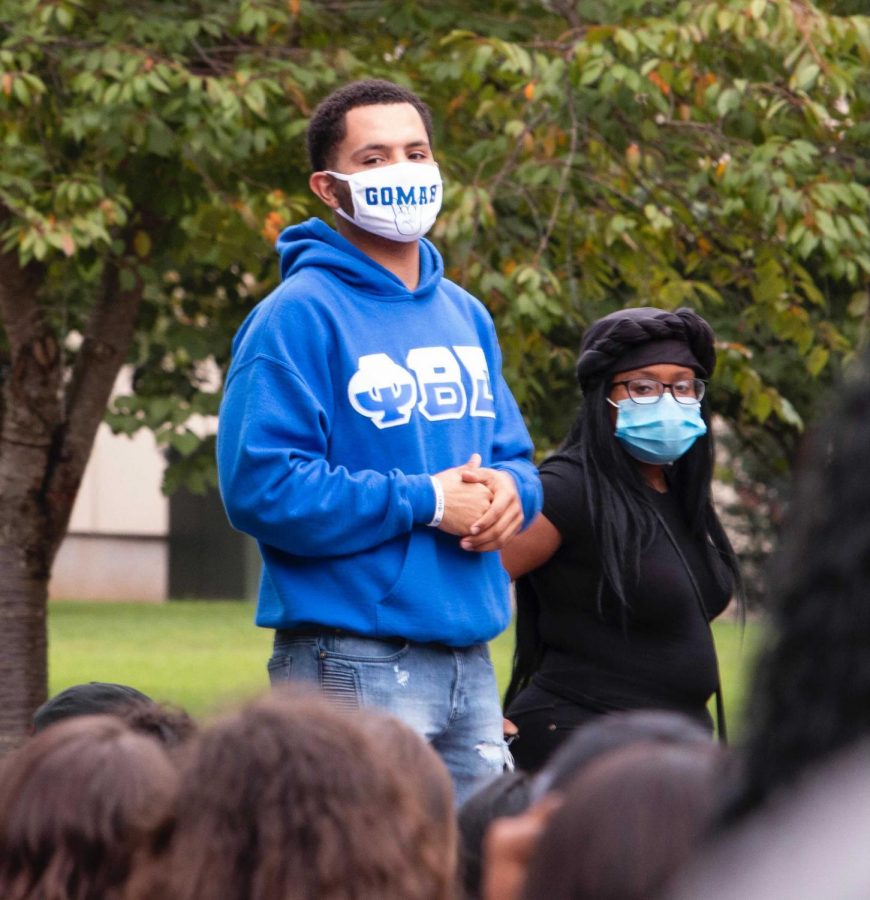 Tracy Scott and fellow ISEC member speak at an event on campus.

Editor’s note: A previous version of this story displayed a photo that did not accurately represent the information in the story. The Herald regrets this error.

Over the last several days, homecoming has become a constant humm in the lives of people on WKU’s campus, and although WKU isn’t having a traditional parade, there still will be a homecoming parade this year.

The Intercultural Student Engagement Center Academy will conclude their homecoming week celebration with a unity parade ahead of Saturday’s game against Marshall.

The parade will start at the WKU Honors College at 4 p.m., go up the Hill past Cherry Hall, and then down Avenue of Champions to end at Diddle Arena.

Traditionally homecoming parades are known for their parade floats, organizations on campus spending weeks meticulously pomping pieces of tissue paper into the rigid frames of their decorations.

Tracy Scott, a senior journalism major and a peer coordinator at ISEC, said the ISEC parade won’t have any huge floats or tractors, and that their parade has a less traditional theme.

Over 20 organizations will be joining ISEC for their walk, and the theme was designed to embody the struggles that minorities have to go through in America, including the climb up the hill that Scott says is emblematic of the struggles of students of color.

“It’s a far climb for us,” Scott said. “Climbing up the hill that way is part of us putting our trials into motion. As we walk up the hill, we have to deal with racial bias here on campus. We have to deal with trying to find a community that will accept us for who we are, and not judge us and try to make us change.”

Scott said in the wake of COVID-19, a parade seemed like the best way to safely showcase organizations here on WKU’s campus during homecoming.

“Because we know COVID is going on, we didn’t want to have an indoor event, or an event that would put guidelines at risk,” Scott said. “What better than to have a parade where people can walk freely and yell and shout on the outside.”

In addition to the parade, a spirit-poster contest will be held the day of the event. Participants are encouraged to make spirit posters and showcase them alongside the parade route on Friday, and Scott said everyone is encouraged to participate.

“We want to use this day to come together as a family,” Scott said.