Berea College invites WKU to webinar on LGBTQ+ in the South 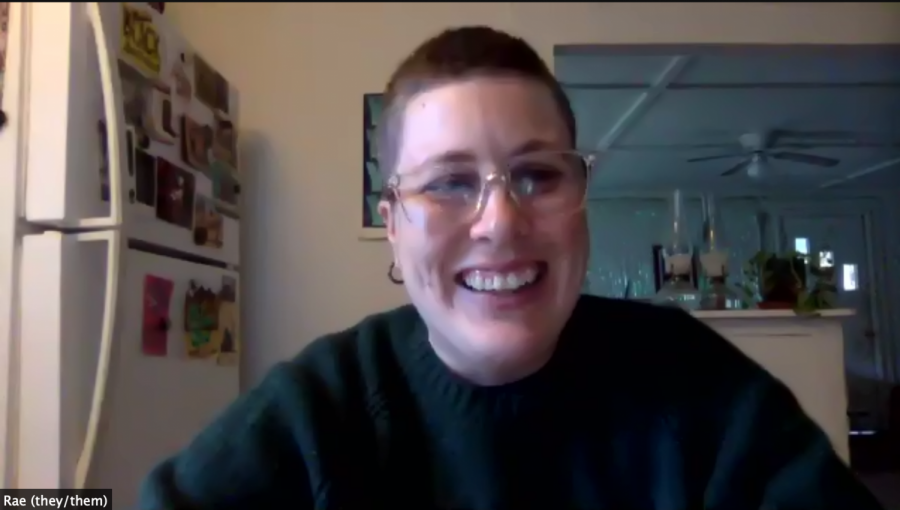 In celebration of October being LGBTQ+ history month, Berea College Women’s and Gender Non-Conforming Center opened up a Zoom event to several universities to discuss with the Country Queers editorial team how LGBTQ+ members from rural and small towns can tell their stories both with and for the marginalized communities they are a part of.

Country Queers is a community-based multimedia oral history project directed and founded in 2013 by Rae Garringer. Country Queers has a podcast, a traveling gallery exhibit and as a whole, a collection of over 70 interviews of rural and small-town LGBTQ+ stories spanning across rural areas in 15 states.

Gerringer, who uses they/them pronouns, said during the event that a lack of accurate representation is one of the reasons they started Country Queers when they returned to their home in West Virginia after being gone for 10 years.

“I had bought into the idea that I couldn’t have my queerness and have the mountains too,” Gerringer said. “I only ever met queer people from or rushing to major cities on the coast, and I did that too, but I finally moved home and I very quickly started to actually see queer people around. I could see us differently now that I was out and aware of my queerness.”

Gerringer said that while this was positive, it was also very frustrating.

“I felt like I had been lied to, or lied to by omission, for sort of my entire life. Up until my late twenties, I had no idea that there are queer people in the country or in rural Appalachia,” Gerringer said. “Not only those living in secrecy or fear, but also those that are thriving and doing their thing and are really happy and healthy.”

It was after this realization that Gerringer said they created Country Queers.

“I had no idea what I was doing. I had no training, but I was desperate to meet people.” Gerringer said in the webinar. “It all came out of this feeling of pretty intense frustration that I was nearly 30 before I started to find people in my home community who were queer or trans and having a different experience than what I found on mainstream media, which was either nothing or stories of really intense violence and murder.”

Gerringer started the Country Queers Podcast this past summer and invited Cortés, Holland and Wallace to be on the editorial team because Gerringer respected them as great thinkers who are each connected with rural queer experiences. The team focused the discussion on the power of storytelling.

Cortés, a queer Xicana from Shenandoah Valley, VA who works in strategic communications, said during the event that she realized the power that shifting and shaping a narrative has after, at one point in time, only seeing the violent stories of her community members displayed in the media.

“The power of the narrative should be steeped in the work to support people in impacted communities, to change the powers that be and to change the material conditions of lives,” Cortés said. “That work is directly connected to the work of Country Queers, because it is critical that people can tell stories for themselves and not just have the avenues to do so, but to also feel confident and safe enough to do so and for them to feel like they’re part of communities where they can do this.”

Wallace, an award-winning independent journalist based in Durham, N.C., was involved with the queer youth movement in the 90s. He said in the webinar that before there was accurate representation in mainstream media, it was by word of mouth that he was exposed to the idea of being transmasculine or gender queer.

Wallace, who is transmasculine and queer, said it was because of that lack of accurate representation of people like him that he became involved in storytelling.

“That’s how I came into the whole idea of telling a story or making media.” Wallace said. “We did it because we had to in order to make space to be the people that we were in the world, and in order to connect with others fighting for justice in various ways.”

Holland, who is chair of the department of American studies at University of North Carolina and co-chair of the Provost’s LGBTQ+ Life Committee, said in response to a question from a virtual attendee that she thinks telling queer stories should not be about collecting one identity as a group because she doesn’t think that would be telling the whole story.

“To tell the authentic story of the self is to keep telling stories that challenge what story is until there is no central story,” Holland said. “There’s just your story alongside other stories, and we can tune-in to anyone we want and feel energized and nurtured and think with that person.”

The group also discussed the harm storytelling has the potential to cause communities that are already marginalized, which is why they all agreed that accountability is necessary when telling people’s stories.

Cortéz said during her work as a communications director at a power building organization, she focused on sharing and uplifting the stories of queer and trans people in the South. In this role, she said there were many people who wanted to exploit the people in the stories, which is why accountability is crucial.

“I was always interacting with editors and producers who wanted to take our people’s stories, but it was extractive,” Cortéz said. “They never had the time to learn the full context, they always messed up people’s identities in all kinds of ways, and they exploited them and often put them in physical danger.”

Wallace said he thinks that, in public media, structures of accountability are often geared towards the known audience of mostly white and middle to upper-class readers, making him “critical of institutional accountability.”

“In public media, structures of accountability are complex and not representative,” Wallace said. “They don’t include the people reported on or the public in a meaningful and comprehensive way.”

Gerringer said that despite the team’s varying approaches to storytelling and use of different mediums when working, “there’s a through-line in terms of our approach to working with communities we’re connected to and the communities we feel accountable to.”

The next virtual pride event is Thursday, Oct. 29 and can be found on the university’s website.

Maggie Thornton can be reached at [email protected]