Views from the bottom of The Hill: Nothing to celebrate about that win 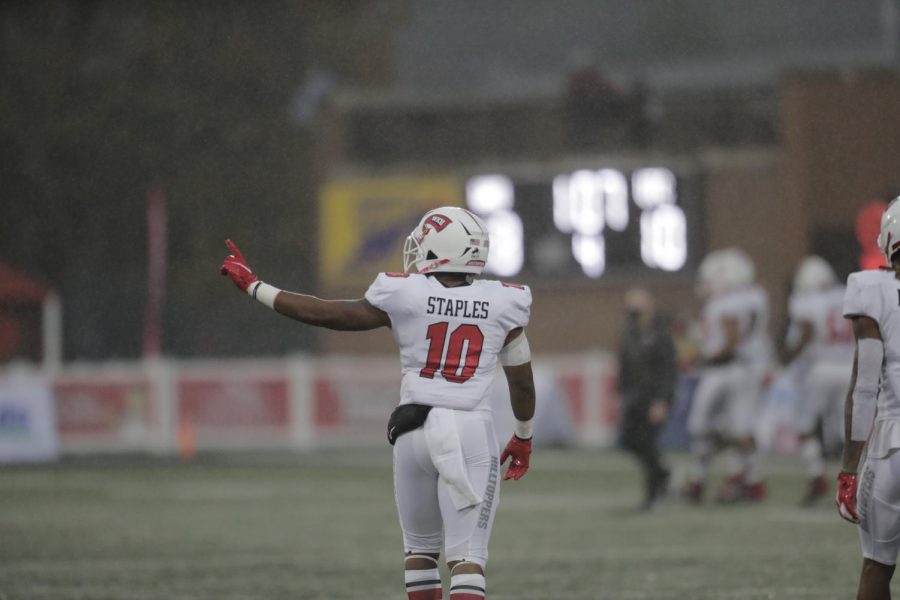 WKU running back Malik Staples (10) waves his finger at the UTC sideline following a UTC called back touchdown.

WKU defeated Chattanooga 13-10 Saturday afternoon after a very questionable overturn of a kickoff return for a touchdown by the Mocs, and a few players celebrated like they won the Super Bowl.

Let’s be clear, you can celebrate a win, as you should, but this was no win to celebrate, especially the way they did.

On that overturned kickoff return, the referees said the upback for the Mocs signaled for a fair catch, and even after the replay, there didn’t seem to be any signal for a fair catch. That call ultimately decided the game, giving WKU its second win of the season.

The problem is it should have never gotten to that point.

WKU should have beaten Chatt by more than a mere three points. WKU has better athletes, more money put into the program and faces stiffer competition.

“A win is a win,” head coach Tyson Helton said. Of course it is. But when you win in this fashion you have to question if that’s worth celebrating.

This was Chattanooga’s only game in the calendar year of 2020 and WKU made them look like they were in mid-season form. This was essentially a spring game for the Mocs and they only lost because of one of the most blasphemous calls in college football history.

Chatt controlled the line of scrimmage throughout the game on offense, keeping the Hilltopper defense on their heels for a lot of the contest, but couldn’t capitalize as the game progressed.

WKU had the run game looking good for the first time this season, but when it mattered most they went away from it or tried to get cute.

In the red zone on more than one occasion, instead of running downfield like they did for most of the series, they went lateral, running jet sweeps and then a jet sweep pass that broke down completely, which stalled all their momentum forcing them to kick field goals.

I think we can finally put to bed the discussion between quarterbacks Kevaris Thomas and Tyrrell Pigrome. Pigrome deserves the start. Thomas went 12-17 for 59 yards and a fumble while the offense wasn’t putting up touchdowns.

Pigrome came into the game and immediately made an impact with a 38-yard throw to Mitchell Tinsley which got the offense going enough to eventually get them to win the game.

It’s always the little things that can change the outcome of the game, and WKU did everything in its power to give it to Chatt.

After having a great game last week, Joshua Simon was wide open with no one around him to get an easy go ahead score and flat out dropped it.

The special teams had another blunder as the defense forced a three-and-out but touched the ball on the other side of the field giving the Mocs great field position which ultimately led to a field goal.

I’m all about looking at the positives and taking the small victories you can, but a blown call saved WKU from an embarrassing loss on Saturday

The difference between this team and last year’s team on paper is so minuscule, but on the field something just isn’t right. If this game is an indication for the rest of the season it’s going to be a long and painful one.