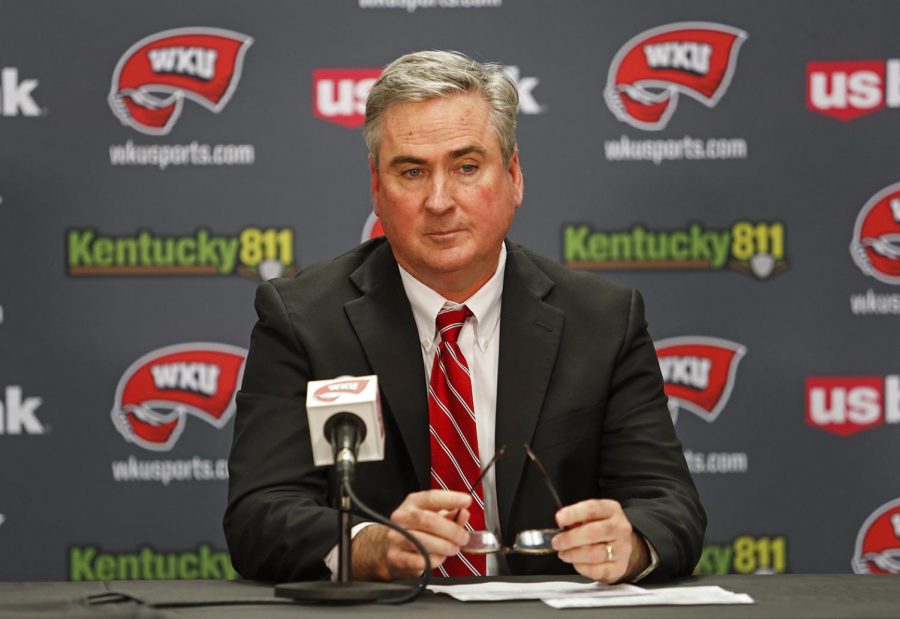 WKU coach Rick Stansbury answers questions during the postgame press conference after the game against Tennessee Tech on Tuesday, Nov. 5, 2019. The Hilltoppers defeated the Golden Eagles 76-64.

“We’re going to open up in a bubble out in Nebraska,” Stansbury said. “We don’t know who our first opponent will be for sure, but we do know we’re playing LSU in the second game.”

The Tigers should be a consensus top-25 team by the time the season starts, headed by the trio of Ja’vonte Smart, Trendon Watford, and Darius Days. LSU finished with a (21-10) record last season.

The second bubble Stansbury announced the Hilltoppers will play in will be held by a cross-state rival in the Louisville Cardinals. Stansbury said WKU will play at least three games in the bubble, including Louisville, which makes at least two top 25 opponents to start the season.

“I think it’s a good deal from a standpoint of trying to help us play games. It’s very obvious being able to play two games in the same venue, without the travel will help the testing part,” Stansbury said. “There’s no way with the quality, it will be fair for everybody, there’s four teams in the league we aren’t even going to play…but it is what it is right now, and we all have to adjust to it.”

WKU will open conference play on New Years Eve at Charlotte before heading home to face Louisiana Tech on Jan 7.

Stansbury then went into the roster the Hilltoppers have this year and how he’s really impressed with freshman Dayvion Mcknight.

“His adjustments have been very minimized. For most guys, it’s a huge adjustment for young men, physically and mentally, to freshman year. Those two things aren’t adjustments for him; he’s way ahead of the curve in both those areas. Physically he’s 200 pounds, mentally he’s consistent everyday toughness wise…he’s been really impressive.”

He then gave praise to the newcomers, including junior college transfer Kevin Osawe and freshman Kylen Milton.

“It’s going to be an interesting year for all of us,” Stansbury said. “I think we all have to be flexible. We all have to be willing to make adjustments. I learned a long time ago it’s best not to worry or complain about things you have no control over.”

WKU returns six players, seven if you include Kenny Cooper, including Charles Bassey, who is returning after a season ending leg injury last year after playing ten games.

Taveion Hollingsworth returns for his senior year after averaging 16 points, 2.7 assists, and 4.2 rebounds a game while shooting 84% from the free throw line.

WKU returns to the court on Nov. 25 in the Nebraska Bubble.