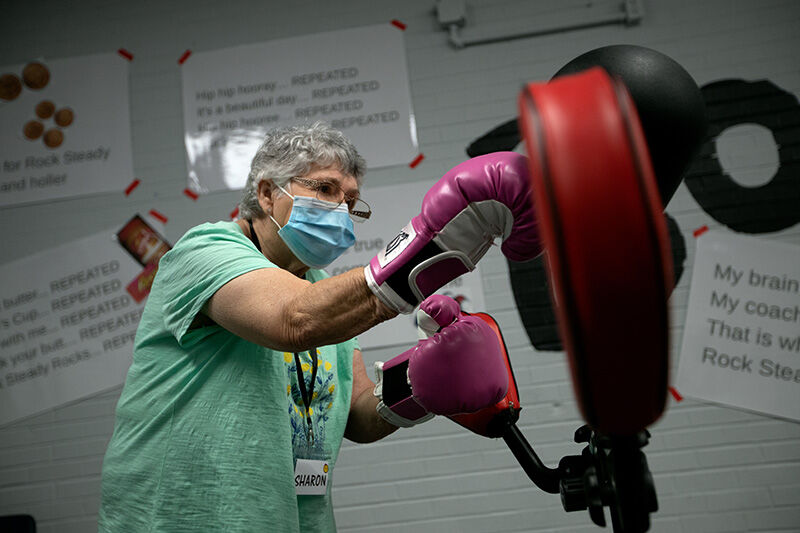 Sharon Young exercises in a workout circuit at the gym on Sept. 10. Rock Steady Boxing helps participants with Parkinson’s disease to improve motor skills and balance.

In a small gym tucked to the side of 31-W Bypass, people are constantly fighting. They are fighting to tie their shoes, to write with ease and to rise up on their tip-toes — all simple skills individuals without Parkinson’s disease often take for granted.

Jill Steffey, a newly-retired educator, is the head of Bowling Green’s Rock Steady Boxing gym — a nonprofit organization that offers contactless boxing-based fitness training to people with Parkinson’s disease. After witnessing both her grandfather and father battle Parkinson’s, she said she felt called to dive into research of it. She began by reading textbooks and scientific studies and even attended “P.D. School,” a class exploring Parkinson’s facts. Her studies and personal connection to the disease led to the discovery of Rock Steady Boxing, which is based in Indianapolis and has over 900 affiliates across the globe.

Parkinson’s disease is a tough opponent, but optimism is in the air at Rock Steady Boxing Bowling Green.

Motivational phrases cover the walls, and cubbies full of boxing gloves line the edges of the room. As classes ensue, Steffey encourages class participants, called fighters, with her therapy dog-in-training, “B.B.” (Busy Body), at her side.

Not only does the gym provide group physical therapy through non-contact boxing, but they also do activities like playing with balloons, arm bicycles, stairsteps and dancing. Through an array of exercises, fighters work to improve their balance, gross and fine motor skills, flexibility, endurance and strength. These exercises provide a solution for every dilemma, from improving handwriting to building the strength to get up from a fall.

Though most people associate Parkinson’s disease with motor symptoms such as tremors and feet-shuffling, non-motor symptoms can occur as well. These include problems with attention, planning, language, memory or even dementia, according to the Parkinson’s Foundation. To help with this, coaches incorporate exercises for the mind including writing down answers to questions, recalling patterns, shouting chants or simply recalling favorite vacation destinations.

Along with building a strong body, perhaps the most empowering aspect of Rock Steady Boxing Bowling Green is the undeniable community. The Parkinson’s Foundation reports anxiety, depression, apathy and irritability as common symptoms, making a healthy social life even more important for individuals with Parkinson’s.

The group gathers before beginning each class to discuss prayer requests or to simply catch up since the last time they saw one another. Fighters lovingly tease and encourage their fellow participants through each exercise while vocally counting down the seconds until the timer bell rings, marking the end of the round. To end each class, they form a circle with their hands stacked in the middle as they chant, “Rock steady, rock strong.”

Family and friends of fighters have the opportunity to engage in the gym’s community by being a cornerman — someone who helps the fighter through physical, mental and emotional aid. The gym also hosts a support group for the family and friends of someone with Parkinson’s.

Rock Steady Boxing Bowling Green changes lives. As members of the gym continuously show improvement, they regain the strength to do activities that they previously viewed as impossible. Following approximately six months of training, Bowling Green fighter Howard Margolis even improved his posture enough to peer over the side of an incubator to gaze at his newborn great-granddaughter, Journi.

Rock Steady Boxing Bowling Green has complied to COVID-19 regulations by adjusting class sizes. To discuss training, pricing or arranging a tour of the gym, contact Jill Steffey at 270-799-3667. Rock Steady Boxing can also be reached at [email protected] Interested volunteers ranging from nursing students to fraternity brothers are welcome to serve.