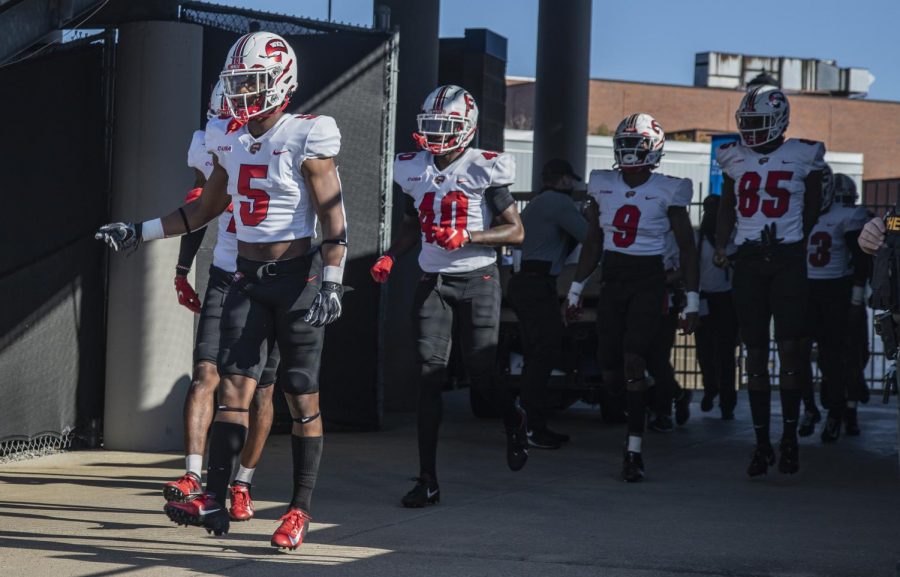 WKU heads out onto the field in Murfreesboro, Tennessee for a matchup against Middle Tennessee State University on Oct. 3.

WKU will look to have a homecoming to remember Saturday night at Houchens-Smith Stadium when they try to knock off the undefeated Thundering Herd.

A tough task at hand, Marshall has wins over Eastern Kentucky University (59-0), and at the time, No. 24 Appalachian State University (17-7).

The scorching hot start to the year put the Thundering Herd at No. 25 in the nation, but it was short lived after their week five game against Rice was postponed due to COVID-19 complications that arose on Sept. 15.

The motivation is now stronger than before to get back into that elusive ranked company, and if Marshall can pull it off it will probably have to come in the final minutes of this weekend’s contest.

“Last couple of years it’s been kind of down to the last series,” head coach Tyson Helton said. “I expect it to be that way again.”

For the Hilltoppers to potentially steal the game in the final series, the defense is going to have to find an answer for last year’s Conference USA Player of the Year in redshirt junior running back Brendan Knox.

The 6-foot, 223 pound back has 223 rushing yards and two rushing touchdowns on 46 carries in two games this season.

Three weeks ago against the Mountaineers, Knox showed out once again collecting 138 rushing yards and one rushing touchdown on 28 carries.

With all of the ground this husky back can gain in the blink of an eye, the most impressive thing about the veteran might just be his ability to never give up on a play.

“He understands how to get an ugly four yards,” defensive coordinator Clayton White said when talking about the dangerous Knox.

“Sometimes you go against running backs, they’ll try to do too much and they won’t get anything, but he understands the scheme that they’re running,” White added.

White and his players are going to focus all of their attention on neutralizing Knox, which leaves redshirt freshman quarterback Grant Wells with the job of taking some of the load off his running back.

The rookie Wells enters his first Moonshine Throwdown with 470 passing yards and four passing touchdowns in the first two games of his college career.

Graduate quarterback Tyrrell Pigrome and his band of scrappy running backs in senior Gaej Walker, freshman C.J. Jones, and senior Jakairi Moses will have the mission of countering that versatile Thundering Herd offense.

Coming off a C-USA Offensive Player of the Week honor, Pigrome has been solid, yet offensive coordinator Bryan Ellis wants to see more out of the dual-threat athlete.

“The thing I keep harping on him is, you watch the tape and there’s four or five opportunities in the game where we have an easy one,” Ellis said of Pigrome.

“We just got to be more consistent in the passing game as far as when it’s an easy one we got to make them,” Ellis added.

Pigrome hasn’t had a lot of help though in the running game, which is ranked No. 10 in C-USA.

Moses, who burst onto the scene last weekend in Murfreesboro, once again will try to bring that energy to the turf on Saturday.

“To be honest, it doesn’t really change anything. I’m gonna go at it as the same approach as any other day,” Moses said.

Wide outs redshirt senior Xavier Lane and sophomore Dayton Wade will most likely have to be on top of their game for a second week in a row.

To make matters even more difficult for the Hilltoppers they are going to most likely have to defeat Marshall in some incoming inclement bad weather.

There is about a 70% chance of rain heading straight for the Hill right at kick off, but WKU has been preparing for the anticipated weather in practice.

“We’ve worked on it all week,” said Helton. “We had a manager stand over the ball with a bottle of water and just continue all week to put water on the ball.”