The woman who runs Barnes: A day in the life of Sharon Hunter 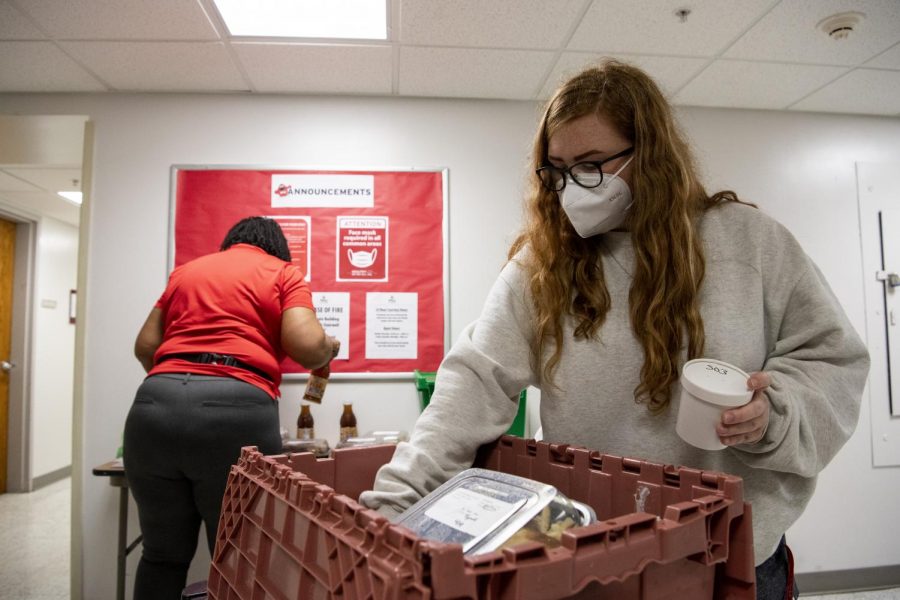 In previous years, Sharon Hunter, assistant director for data analysis and research of Housing and Residence Life, could have been found easily in her office. However, in the year of COVID-19, it might be easier to find her going around campus on a golf cart, parked in front of Downing Student Union, HRL or Barnes Campbell Hall, trying to take care of students in quarantine as best as she can.

A day in the life of Hunter probably isn’t going to be the same as the day before. However, here’s a look into her life on Friday, Oct. 9.

8 a.m. – Breakfast arrives at the back door of Barnes in plastic crates with post-it note labels for each floor. One of the special requests that came in Friday was orange juice. The meals are delivered beginning with the sixth floor and down. Plates of pancakes and bowls of oatmeal or fruit are set out on tables, waiting for the residents to come get them.

Most floors have water bottles in a cooler sitting out for the residents.

Dinner leftovers from the night before are thrown away. Hunter said the amount of residents can change hourly, so she has to check meals. Sometimes, people just don’t get their food. A box of strawberry Pop-Tarts sits on the tables for students to grab as a snack.

8:14 a.m. – Breakfast delivery is finished. Any previously forgotten drinks are taken up to the correct floor.

“Our residence hall association is working with [Student Government Association] to get a grant to do little packages,” Hunter said. “So we can do like cough drops and tissues and comfort things for students who they can just come and pick it up if they need it.”

The meal carts are reset for lunch, and Hunter takes stock of any drinks that may be needed. She brings cough medicine to a student whose parents asked for it the night before. She knocks on the door to get the student’s attention.

“Good morning!” she said through the door. “It’s Sharon.”

Once the student acknowledged her, Hunter turned off the dehumidifier in the hallway to have a conversation about the cough medicine and let the student know it’s outside their door.

8:18 a.m. – “Good morning students,” a student assistant says over the hall’s intercom. “Your meals have been delivered.”

The staff delivering meals is downstairs with the ordered food on the tables. If Hunter notices anything that needs to be fixed, she makes another trip upstairs. She has any conversations with students that she needs to.

On the way out, Hunter points to the table in between the inner and outer doors. The table is for DoorDash deliveries, anything dropped off by parents and any sorority big/little gifts left for students.

8:26 a.m. – SERVPRO of Warren County arrives to clean the dorm with an electrostatic fogger that kills 99.99% of germs. The man using the machine says the fog is plant based, so you could drink it without harm. His team comes on Mondays, Wednesdays and Fridays to clean the dorms.

The rooms are cleaned by a different group contracted to do the cleaning. Hunter waits until there’s enough used rooms which need to be cleaned in order to spend the money on the contract.

There are no WKU building service attendants that clean Barnes, so all the work that goes into cleaning is done by outside vendors and Hunter. In a sweep on Friday, Hunter found a bag of trash hidden in one of the closets where the vendors might not look.

“I’ll have my own button next month,” Hunter said about her order to the Starbuck cashier as she paid for her drink. Her order includes more steps and amendments than just a latte or mocha.

While waiting for her coffee, Hunter checked her phones for messages and emails. Hunter has two phones, one that is her personal phone and one to answer calls and texts from students. On Friday, she said she had to do one follow-up with a student who went home. There are three students who need to be checked on to see if they will be quarantining in Barnes.

8:55 a.m. – Hunter returned to her office to work on the other parts of her job and field phone calls. On her desk sits a plaque with a post-it-note altered phrase.

“There cannot be a crisis this year my schedule is already full,” stated the plaque, with the word “year” written in all caps on a strip of sticky note over the original word.

Hunter also provided information to Bob Skipper, director of media relations, on the number of students in Barnes, which she said would be wrong by the end of the day.

“I better do that before Bob gets grumpy,” Hunter said.

Hunter receives requests for anything from scissors and notebooks to tampons and towels. On Friday, she checked the rooms of students, the number of rooms with students in them, added rooms to the list to be cleaned and sent release paperwork to departing students. A student called about the food survey process.

“You have to fill out one every night for the next day,” Hunter said.

There’s something new about quarantine Hunter has to figure out every day. On the plexiglass at the front of her desk, there’s a sticky note to remind her to figure out what to do about voting for students in quarantine.

9:45 a.m. – Hunter attended a video conference meeting about hiring someone to live in Barnes full time, a position that was previously filled for about a week at the beginning of the semester.

After the meeting ended, Hunter prepared for the lunch run of the day. One of her coworkers popped into her office to ask about the golf cart she had been using all day.

10:17 a.m. – Hunter started checking meal lists to see what the students were eating. She said that she can tell how a student is doing by how many meals they order and what they’re ordering.

Hunter remembered a student who is vegan and was only ordering the humus and vegetables option for several days in a row. She reached out to the student and found out about their veganism. Hunter and the student worked with Aramark to get the student vegan food they enjoyed.

10:21 a.m. – Hunter left her office on the golf cart to meet the lunch meals and the student helper.

10:24 a.m. – Hunter arrived at Barnes and started checking each room. The people from SERVPRO had finished cleaning, so she also checked the bathrooms.

Hunter said the water in some of the coolers on the floor would need to be restocked over the weekend. She also checked things in the hallways and tucked into odds spots in empty rooms.

10:46 a.m. – Hunter finished room checks and started prepping the food cart for lunch. She added more silverware packages to the tray and went to first-floor Barnes office to see if the lunch list was printed out. She loaded Coca-Colas, Sprites and sweet tea onto a drink crate. A different student helper arrives for lunch.

11:03 a.m. – Lunch arrives at the back door of Barnes. The boxes are stacked onto a cart separate from the drinks, and everything heads to the elevator. Upon arrival at the sixth floor, the group discovered that the sixth floor meals were at the bottom of the box and the fourth floor meals were at the top. Hunter and the student helper pile back into the elevator and head to the fourth floor to work up from there and then down from the third floor.

11:19 a.m. – “Lunch is served,” came over the intercom. The student worker announced the end of lunch delivery.

11:30 a.m. – Hunter arrived back to her office for the afternoon to check on the day’s COVID-19 test results, follow-up with students and figure out if anyone needed medicine. She sent out the Zoom link for the upcoming Wednesday meeting that she’s started having as a check-in with residents of Barnes.

During her time in the office, Hunter got to work on moving three new students to Barnes. She used HRL’s case management system to fill out forms before the students moved. Then she called each one and took them through the steps of preparing for quarantine.

She also sends them an intake survey before they go to Barnes. Hunter coordinated their pickup times through Environmental Health and Safety and sent them a meal survey for the rest of the day.

12:28 p.m. – Hunter prepared to take an additional lunch to Barnes for one of the students who had just moved in. She also brought a pair of scissors to a student who had called and requested them.

“It’s like turning the Titanic,” Hunter said. “Everything is so front loaded.”

12:37 p.m. – Hunter parked the golf cart in front of DSU and headed up to Fresh Food to pick up the additional lunch. Hunter said that about 30% of the time she has to go back for another lunch.

12:43 p.m. – Hunter arrived at Barnes with the additional lunch for the new arrival. After setting the meal on the floor’s table, she took the scissor to the student who had requested them.

12:58 p.m. – Back at HRL’s offices in Southwest Hall, Hunter returned to her office and got back to work. She answered another call from a student about food and ordering dinner. Hunter also began looking into how to purchase from POD for students on their meal plans and Big Red Dollars.

1:18 p.m. – Mike Reagle, assistant vice president for student engagement and executive director for housing and dining, poked his head into Hunter’s office and asked her to stop by his office for a meeting.

1:35 p.m. – Hunter returned to her office and began an afternoon of office work, both relating to her job with the pandemic and her usual job as assistant director.

During her afternoon, Hunter wrote a draft of an update for parts of HRL’s website. She also went through the process of moving two more students to Barnes who had found out they needed to quarantine that day.

4:49 p.m. – Hunter arrived at Barnes to prepare for the arrival of dinner. She started with the silverware and the drinks. Hunter reflected on when on-campus quarantine started and how it was like helping with the football team’s quarantine all over campus.

“As much flack as they take, they were exemplary,” Hunter said.

When all the other students arrived and started to quarantine, Hunter didn’t view it as easy. The diversity of student needs presented new challenges.

Hunter also restocked the cooler in the office where all the drinks are kept.

5:08 p.m. – “What is going on party people,” the helper said. “It’s your favorite neighborhood resident assistant Jonah speaking. It’s approximately 5:09 p.m., which means dinner has been served. One final reminder: I want all of you to have a fantastic day and go tops.”

5:11 p.m. – Hunter took a phone call with a student who was ending their quarantine that day but hadn’t ordered university dinner.

6:20 p.m. – After she returned home, Hunter received one more phone call from a student through the COVID-19 hotline who had missed dinner because they thought the voice on the intercom was a part of their dream.

Hunter’s day ended like most people’s: going home, going to bed. However, her next day will start the way it did on Friday: waking up at 5:30 am to get the meal orders into Aramark by 6 a.m.