Covering a WKU football game amid the COVID-19 pandemic 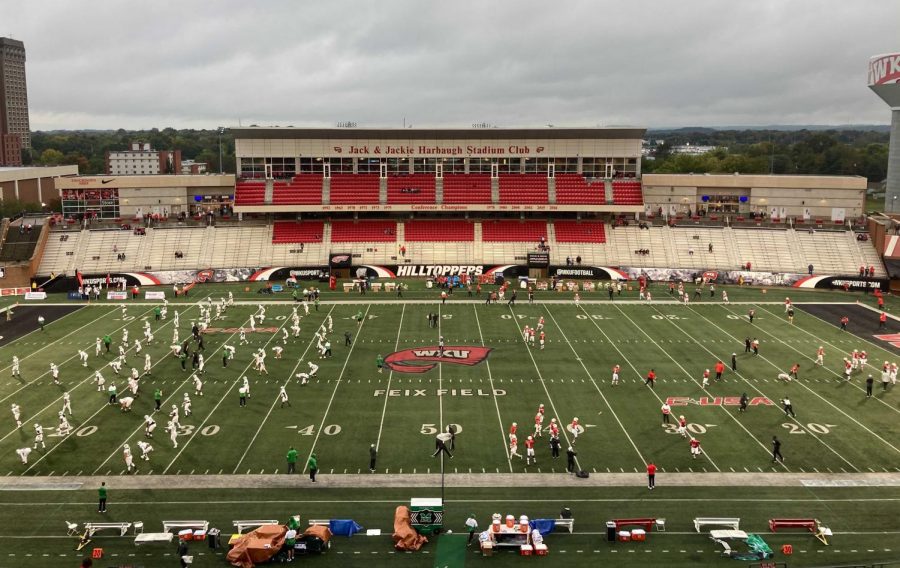 Houchens-Smith Stadium from the perspective of where the media sits during a WKU football game.

Walking through a desolate Centennial Mall with the sound of WKU’s band getting louder every step closer to Houchens-Smith Stadium signaled there was a congregation gathered for an event, but not as before.

Cutting the corner by Downing Student Union, fans and students paraded toward the second home matchup between WKU and Marshall University.

People were wearing masks and making their way to gates around the stadium. As patrons approached the entry a staff member would check temperatures. By regulations set in place, no one could have a 100.4 degrees Fahrenheit temperature.

Standing on the concourse and gazing at South Lawn, you could see no tailgating prior to the game. No group gathering there can have more than 10 people in it.

Through two home games no tailgating has been seen, and the next chance to see the lawn come alive is Oct. 24 against the University of Tennessee Chattanooga.

The football venue is capable of holding 22,113 people, but the new regulations in place due to COVID-19 changed that number significantly.

This homecoming affair at WKU saw 4,428 people accounted for in the stands. This is roughly 20% of what Houchens-Smith can hold.

Once the temperature reading was complete upon the media entry, passes were given out as per usual, and a boxed meal stood waiting on a table to be picked up.

Q Coffee Emporium provided the meal on this occasion. A ham and cheese sandwich with a bag of Lay’s original potato chips, plus a chocolate chip cookie the size of a person’s face.

Seating for the media is also socially distanced. The press box has at least once chair between reporters and staff members.

With the regular press box in play for returning media outlets, there was also some outside seating for any added reporters to the event.

For two games that was the seat assigned and rain was in the forecast on this cloudy evening. However, the rain held off until the game concluded and it was a light drizzle.

With the outdoor seat, the view of the field was still impeccable, and seeing the players rush out of the tunnel for kickoff was as good as it would get from that angle.

Around halftime, an email notification came across the screen. It was the Zoom link for the post-game press conference. That’s a part of the job that’s just understood now.

Not getting the personal advantage with the coaches and players is unfortunate, especially with bad internet being a hurdle.

Once the final whistle goes off, the Zoom meeting can be joined and the wait that feels like an eternity begins. Head Coach Tyson Helton comes across the microphone and asks “can everybody hear me?”

He gives his statement regarding the game and then the players come up to the laptop to field questions.

This is the new normal. There’s no sense of how long it will go on, but as long as there’s a chance to cover sports it’s a good day.