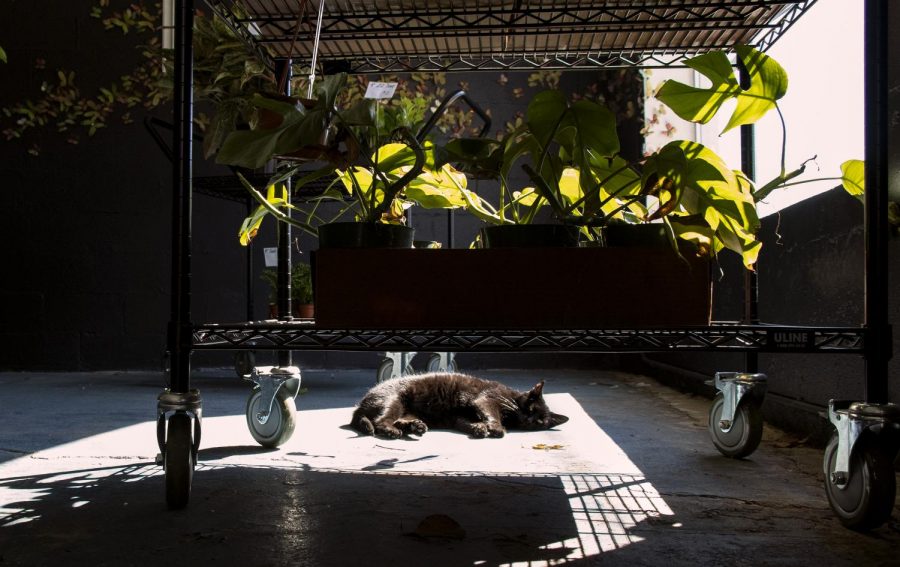 Willow lays by a window in “Jules with the Flowers” plant shop on Oct. 17, 2020. Willow was found outside the store sick and injured when shop owner Jules Sandlin took her in. Willow now resides in the store and greets customers as they walk in.

Bowling Green features flower shops all around town. There are over 10 floral shops with many different stories of how they came to serve the community.

Flowers Around the Corner, owned by Tyler Janes, has been up and running for the past two years on Broadway Avenue.

Janes said that flowers and plants were a big hobby of his, so he decided to make it a career. According to Janes, he is the youngest florist and business owner in Bowling Green.

“I’m only 24, so sometimes people don’t take you seriously because you’re younger as they would with a middle aged person,” Janes said.

He also hires employees from WKU’s floral program like Hope Reed, a senior from Lexington, who has been working there for a year now.

“It’s a great experience, and I’ve learned most of what I know about floristry through the job,” Reed said.

Just down the street from Flowers Around the Corner is Jules with the Flowers. WKU alumna Jules Sandlin owns the shop and has been in business since 2017. Sandlin was a horticulture major while she attended college but didn’t get into floristry until she made a wedding bouquet for her sister-in-law.

Her favorite part of the job is working with customers.

Ellen Buchanon, the owner of Deemer Floral Co. on Lehman Avenue, said her family business has been around for over 100 years.

The business was originally started in 1903 but was owned by someone else.

Buchanon is happy with the staff at Deemer Floral Co. because “we have a really good staff of experienced designers.”

Deemer Floral Co. services all of Bowling Green and Warren County, she said.

Another floral shop seen around Bowling Green is one with a twist. Seeds Flower Truck is a floral shop on wheels.

“When my husband and I were getting married, he asked me what I loved to do and I told him that I loved flowers and that I wanted to do a flower truck,” Shelby Hingle, the owner of Seeds Flower Truck, said. “So we bought a flower truck.”

The flower truck opened on Aug. 8. She said it was a great experience learn- ing what it took to be an entrepreneur during the coronavirus.

Hingle said that they set up at different locally owned businesses because they want to promote local businesses.

“I’m really grateful for the opportunity to have done it,” Hingle said. “It’s been better than we expected.”

According to Dalton, the previous owner had a love of flowers and wanted to put her skills to use, so she started MacKenzie’s Flowers. She had a thoroughbred horse named MacKenzie, and that’s how the floral shop got its name.

The store closed temporarily for a few weeks this year due to the coronavirus but is now fully reopened. Dalton said the closure actually helped the business.

“It had worked out very well because as people were staying home more we found that our orders were very steady,” Dalton said. “It’s probably attributed to the fact that a lot of people couldn’t be with their families, so many of them chose to give flowers in their absence of in-person gatherings.”

Dalton also shared that MacKenzie’s Flowers is in the process of moving locations.

They are currently working on remodeling the new building. In addition to the flowers and plants the business al- ready offers, they will also be offering more home accessories and gift items, said Dalton.

Dalton said one of her favorite parts of the job is working with the clients and “[clients] allowing us to use our creativity and to design something very special and unique for the occasion.”

Henri Aboah can be reached at [email protected]