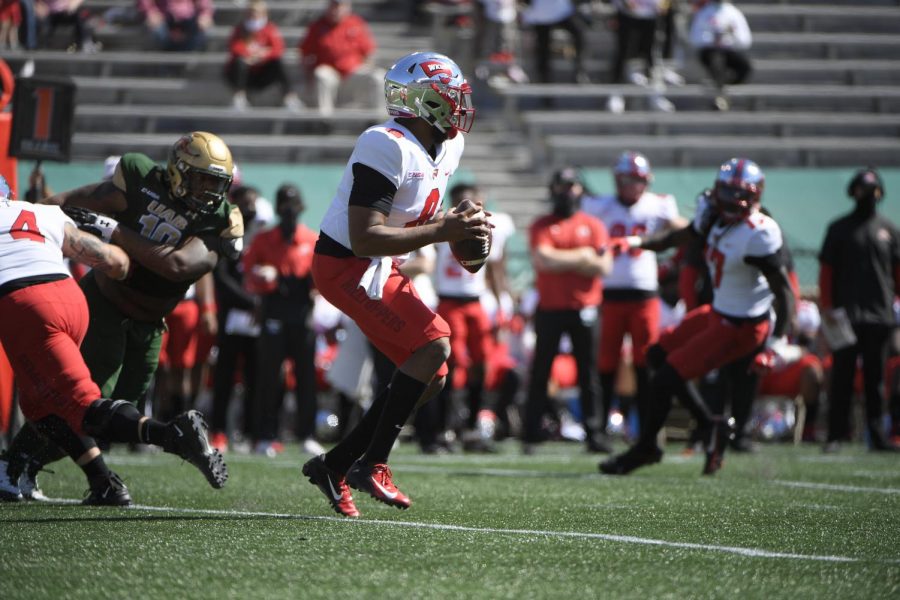 WKU quarterback Kevaris Thomas drops back in the pocket to pass against UAB on Oct. 17, 2020.

This week’s battle for WKU (1-4), (1-2, C-USA) won’t be a typical Saturday matchup when they face off against the University of Tennessee at Chattanooga.

This weekend’s game for the Mocs will be their only one played in the fall, due to the Southern Conference deciding to postpone all in-conference in wake of the COVID-19 pandemic.

Tomorrow’s kickoff at Houchens-Smith Stadium is set for 3:00 p.m. CT.

“It is a little bit of an interesting dynamic I would say with them not having played a game, so you don’t really fully know what to expect,” head coach Tyson Helton said

Coach Helton and his staff have had to prepare for the Mocs by looking at last year’s film.

Offense was the Mocs strong suit last season, averaging 26.2 points per game while rushing for 197.7 per game.

Senior Drayton Arnold will start at quarterback for Chattanooga. The veteran only appeared in three games last season, where he threw for 36 yards and no touchdown passes.

“We expect them to do a lot of different things, a lot of trick plays, a lot of stuff that they wouldn’t normally do if it was a full regular season,” redshirt junior defensive end Juwuan Jones said.

For WKU’s quarterback, Helton has decided to start redshirt sophomore Kevaris Thomas for the second week in a row.

And even though there were some positives to take away from Thomas’ last start against Alabama-Birmingham, Helton has some ideas of what he would like his big pigskin thrower to improve for tomorrow’s game.

“I would like for him to make plays outside of a good play that’s called,” Helton said.

“I felt like in the first game if we called a good play he made the right read, he executed it. But being a good quarterback is half the game, some of the calls ain’t worth a damn to be honest with you, and it’s your job to go make it work,” Helton added.

A key ingredient for Thomas to have a great day against the Mocs though will have a lot to do with his receiving core getting open for him, especially in sophomore tight end Joshua Simon.

Simon, who had 6 receptions for 81-yards last weekend, didn’t have a single catch in the second half against UAB.

“Continue to be creative,” offensive coordinator Bryan Ellis said when discussing the job of getting his tight end going in the second half.

“You know, you got to find ways to move him around, find ways where he’s in different spots where they can’t find him all the time and be able to run certain coverages against him,” Ellis added.

With all this being said, the Hilltoppers almost have to figure out a way to understand this Mocs squad, or else it might end up being too late for WKU to stay in conference contention.