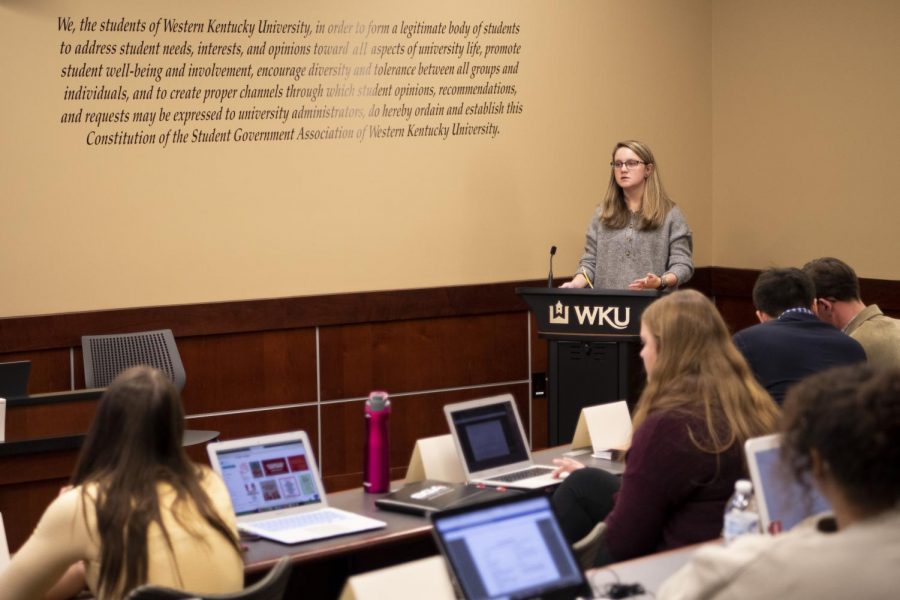 Ashlynn Evans, Director of Public Relations for SGA, speaks at the stand in the WKU Student Senate Chambers on Feb 18, 2020.

The Student Government Association discussed elections and Barnes Campbell in their second meeting of the year Tuesday.

The meeting began with student body President Garrett Edmonds announcing his nominations for numerous SGA positions. Each nominee was given a chance to speak on their platform, and a vote through Google Forms followed.

The following SGA members were elected into their respective positions:

Paul Brosky, Director of IT

After nominations and voting, the meeting moved on to introducing speakers from the Residence Hall Association.

Emily Whitney and Me’Lon Craighead, both members of RHA, detailed how SGA and RHA are going to be working together this year to assist students quarantined in Barnes Campbell.

“We wanted to do this to let students know that we are here, and we acknowledge that they are there,” Craighead said. “Our goal is just to make [quarantined] students feel connected with campus.”

RHA also plans on using the $1,000 from SGA to provide more food, hygiene products and PPE to quarantined students.

Most nominations were voted on this week, but Edmonds stated that he plans on announcing his nomination for the administrative vice president position at next week’s meeting.