Lady Toppers without two veterans prior to season, 2020-21 schedule being finalized 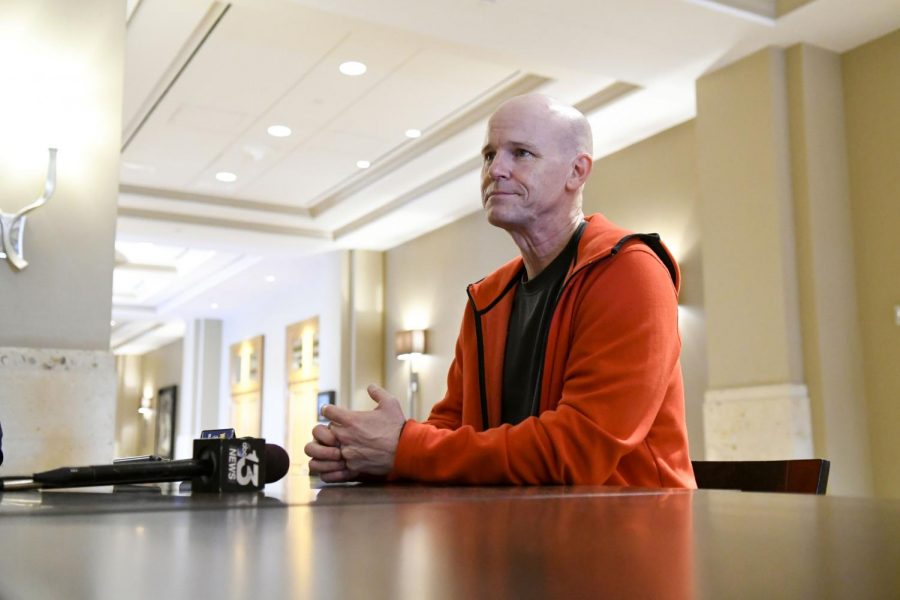 WKU women’s basketball head coach Greg Collins addresses the media following the announcement of the cancellation of the Conference USA basketball tournament due to Covid-19 concerns on March 12, 2020.

WKU Lady Topper basketball is on the verge of returning and head coach Greg Collins addressed the media Wednesday to shed light on the 2020-21 season.

Collins opened saying that senior Sherry Porter has opted out of playing due to concerns with COVID-19. Senior Raneem Elgedawy is also staying home in Alexandria, Egypt with her family.

“We wish them both the best, they’re still part of the team and I wish the best for Raneem and her family and hopefully at some point in the future she’ll return to the team,” Collins said.

Unlike the men’s basketball program the details on bubble play is still to be determined. There will be 18 Conference USA games but Collins said the program is fluid and still working on the full schedule.

“We’re about to finish up the schedule. I expect it to be finished soon. I thought it was finished several times but we’re about to wrap it up and have it for everyone soon,” Collins said.

The Lady Toppers have eight departures from last year’s roster, while bringing in six freshmen this season. Collins currently has four upperclassmen who hold the reigns of leadership for the ensuing campaign.

“We’re excited about the young players that are here, that’s the key thing. We graduated a lot of experience, not just scoring and rebounding. The real positive is that this team plays hard and they play hard together,” Collins said of his roster.

Collins added that team chemistry is at an all time high and it will show up in the wins the program has this season.

According to Collins the strongest energy leader in the locker room is junior Meral Abdelgawad.

“Everyday she plays hard, whether it’s a drill or a scrimmage. She leads this team with effort and energy,” Collins said. “We’ve got some competitive freshmen as well and they are all kind of feeling their way.”

Collins said his team has been healthy and that they are all working hard together.

“We’re really thankful to be able to do all of this. We’re thankful to our athletic director Todd Stewart but also to all of the athletic trainers Mike Gaddie and Michael Bowdy that have made sure to keep this place as safe as they can be,” Collins said.

The program has gone from small groups and not sharing basketballs to now playing three on three and five on five at practice.

“Right now I couldn’t be happier with our work ethic. There’s a lot of things we have to get better at doing and we’ll keep working at those things,” Collins said.

Freshman Ally Collett out of London, Kentucky is one of the newcomers to the team and was the all-time leading scorer with over 2,600 points at South Laurel High School.

“We’re expecting to be a good player and she’s young like the rest of them learning each day,” Collins said. “We were working this morning and she was doing something she’s never done before.

Being a younger team in C-USA will present different challenges this season, and Collins along his veteran players have to work with the fresh talent on the roster.

“Making sure you don’t move too fast as a coach. Don’t get overly concerned about what you can’t do, stay focused on what you can do. We’re working diligently at that, and the players have a great approach to it,” Collins said.

The Lady Toppers will host Charlotte on New Years Eve to kickoff C-USA play and the finalized schedule will be announced at a later date.