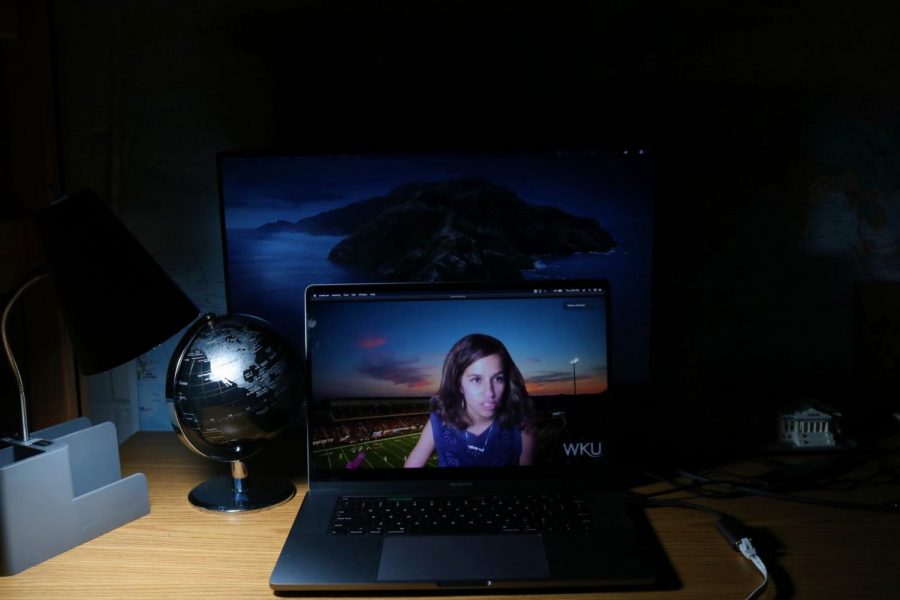 Julia Rivas tells her story about immigrating to the United States at age 13. The discussion was held over Zoom on Oct. 8 for Hispanic Heritage Month.

A panel of WKU faculty and students gathered on a Zoom call Thursday to facilitate a discussion about the immigration process to the U.S. for Hispanic Heritage Month.

The panel was titled “Experiences of Immigrant Families Coming to and Prospering in the United States.” Professor of psychology Thomas Gross led the discussion and was joined by fellow faculty members Julia Rivas, Lamario Moore, Adam Lockwood and Kimberly Green, who all served as a contributing panel.

Gross began the discussion by highlighting the long-term challenges that families from Latin America face whenever they immigrate to the U.S. He mentioned the complex trauma the families experience, due to being in a new environment with a completely different language then they are used to, as well as their anxiety and depression after leaving their families in their home country.

Twenty six percent of hispanic immigrants experience discrimination upon arrival and throughout their lives in the states, according to Gross.

“Given the fact that there are only about 50,000 people transitioning into the U.S., 26% is still quite a large number,” Gross said. “That means around 13,000 immigrants are experiencing this as an issue.”

Julia Rivas, the recruitment coordinator for equity and diversity in teaching at WKU, touched on her own experiences with hardships while immigrating to the U.S. at a young age.

Rivas’s parents both owned businesses in their home country of El Salvador, but after receiving criminal threats, her father decided to move the family to the U.S. to seek safety.

“It was super sad for me to leave at 13 years old…going from comfortable living to living in a basement,” Rivas said. “It was not fun at all, I suffered from depression as a child.”

Rivas spent a few years in counseling, and after getting acclimated to her situation in the U.S. she reflects positively on her parents’ decision.

“After getting to know the country, it was the best thing my parents could’ve done,” Rivas said.

Rivas acknowledged that it was hard for her to comprehend her parents’ decision when she was young, but as she has gotten older, she is appreciative that what they did was in the best interest for their family.

Gross discussed several of the supporting factors that lead many families to immigrate to the U.S. He said many times a belief in God, hard work, and providing for their families are the largest motivating factors for hispanic immigrants.

“A lot of Hispanic immigrants say that their top priority is being a good parent,” Gross said.

Gross opened up the discussion to come up with some ideas on how to better facilitate success for immigrant families.

Responses included a call for special programs, language training for Spanish and English, and helpful attitudes from American citizens.

Professor of communication disorders Kimberly Green said that we must “examine our own cultural competence” as we attempt to help immigrant families, due to the fact that they are coming from a completely different cultural background than us.

The panel concluded with Green expressing her hope for the future of solving immigration issues within the United States.

The Intercultural Student Engagement Center and the Hilltopper Organization of Latin American Students have been putting on multiple events for the past month recognizing and celebrating Hispanic heritage.

These events have been going on since Sept. 15, and will end on Oct. 15. You can find the schedule for Hispanic Heritage Month at www.wku.edu/isec/hispanicheritage/