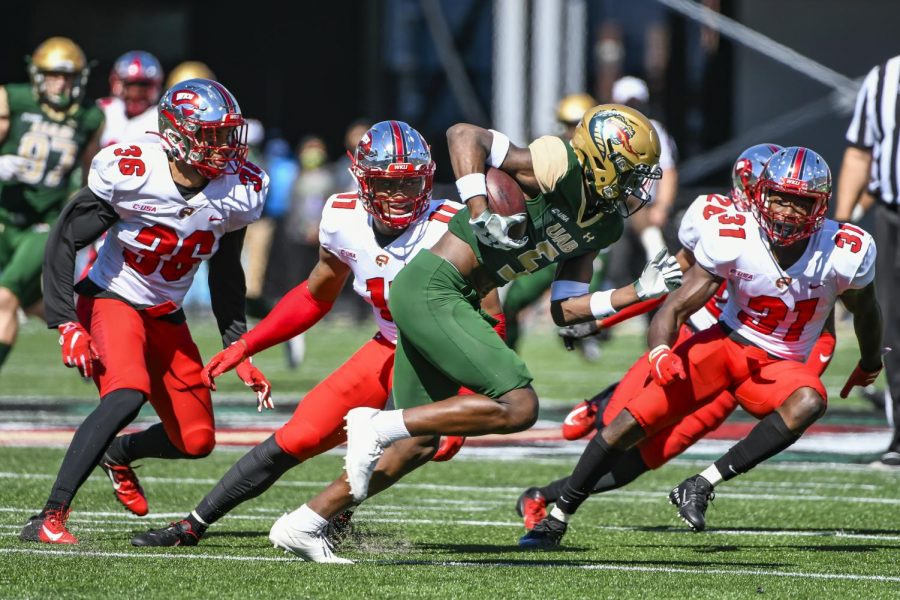 In his first collegiate start, redshirt sophomore quarterback Kevaris Thomas put up two touchdowns and 162 passing yards. He was prone to the turnover though, allowing the Blazers defense to intercept him twice.

“Not good enough. I feel like I could have did a lot of things better to help the team,” Thomas said when evaluating his performance

Freshman DeWayne McBride was sensational Saturday carrying the load for the Blazers offense, tallying one touchdown run on 10 carries and 131 rushing yards.

UAB’s redshirt freshman quarterback Bryson Lucero went quiet in the second half, finishing the game with 141 passing yards, one touchdown pass, and an interception. A hot target for the young quarterback was senior receiver Austin Watkins, who had a touchdown to add to his 7 receptions and 55 receiving yards.

Head coach Tyson Helton stated that graduate quarterback Tyrrell Pigrome has turf toe and that he wanted to see Thomas in the game.

After Thomas couldn’t lead his offense down the field on the first drive of the game, UAB capitalized off a pass interference penalty from redshirt freshman defensive back Omari Alexander.

More trouble for Thomas came early in the first quarter, as he was intercepted on a leaping grab from senior cornerback Brontae Harris.

“We just didn’t execute, they played good defense and I couldn’t put my finger on one particular thing. We’ll keep on working hard to get better,” Helton said.

The slopiness reversed itself though, as WKU’s redshirt senior safety Trae Meadows forced a fumble out of the hands of senior running back Spencer Brown to give the ball immediately back to the Hilltopper offense.

The turnover sparked a fire in Thomas, as the young quarterback led an eight-play, 3:12 scoring drive that resulted in a six-yard touchdown pass from the redshirt sophomore to senior receiver Mitchell Tinsley.

The momentum continued for WKU, forcing a punt thanks to the first sack of the game courtesy of senior linebacker Kyle Bailey.

Seeing how well it worked for the Hilltoppers, UAB looked to get something going off a turnover.

The Blazers forced a fumble from sophomore receiver Dayton Wade, which led to a two-yard rushing touchdown from Brown to give UAB a 10-7 lead at the end of the first quarter.

To begin the second quarter, UAB received a monster score from freshman running back DeWayne McBride who found the endzone on a 71-yard run to make it a two-possession game at 17-7.

Thomas converted a fourth and three pass to sophomore wideout Joshua Simon for a 17-yard gain to pave the way for the Hilltoppers to strike back.

Once again on fourth and one Thomas converted with a one-yard rush, that was followed quickly by a six-yard touchdown pass from Thomas to Simon to cut the deficit to 17-14.

In the first half, Simon led all WKU receivers with 81 yards to his credit on 6 catches. Simon though didn’t get another touch for the rest of the game

“We always did have a good chemistry, but this was our first full game together. I feel like we can progress going into next week,” Simon said about his relationship with Thomas following the loss.

The Hilltoppers couldn’t repeat for a touchdown on their next drive, as Thomas allowed his second turnover of the day on a fumble at the WKU 24-yard line.

With great field position to start the drive, it was a cakewalk into the endzone for the Blazers as Lucero found senior receiver Austin Watkins on a two-yard pass to increase the UAB lead back to 10.

Going into the half, the Blazers had a 24-14 lead over WKU. The comfortable position for UAB came in large part due to the three turnovers they forced in the first half.

Lucero had a stellar first half, throwing one touchdown pass on 104-yards. The freshman was also 11 for 18 completing 61% of his passing attempts.

Kicking off the second half, the Blazers blocked senior punter John Haggerty’s punt and Ryan Davis added to UAB’s lead to make it 31-14.

Quinn booted a 44-yard field goal with 7:08 remaining in the third frame of play extending the Blazers lead to 34-14.

With under two minutes remaining in the third, the Blazers tried to convert on fourth and six with the hope of continuing their drive in order to put the nail in the coffin. UAB was unsuccessful though, giving WKU another chance to try and start a comeback.

The Hilltoppers went three and out though after the turnover on downs, keeping the score at 34-14 heading into the fourth quarter.

In the final frame of play, Meadows got the ball rolling with his first interception of the year to begin the fourth.

The interception didn’t amount to anything, as a couple plays later Thomas threw his second interception of the game to junior linebacker Jordan Smith.

The Blazers put up three more points with just under 10 minutes left to play, increasing their lead to 37-14 sealing the deal for their fourth win of the season.

“Obviously we couldn’t get anything going in the second half at all, but some things to build off of, things to correct, and keep battling,” Helton said

Rushing was an issue the entire game for the Hilltoppers, as they were out-ran 217 yards to 88. WKU also struggled mightily on third down, converting only once out of their 12 tries (8%).

WKU will now head back home and try to avoid their third straight loss when they have to face the University of Tennessee at Chattanooga next Saturday.