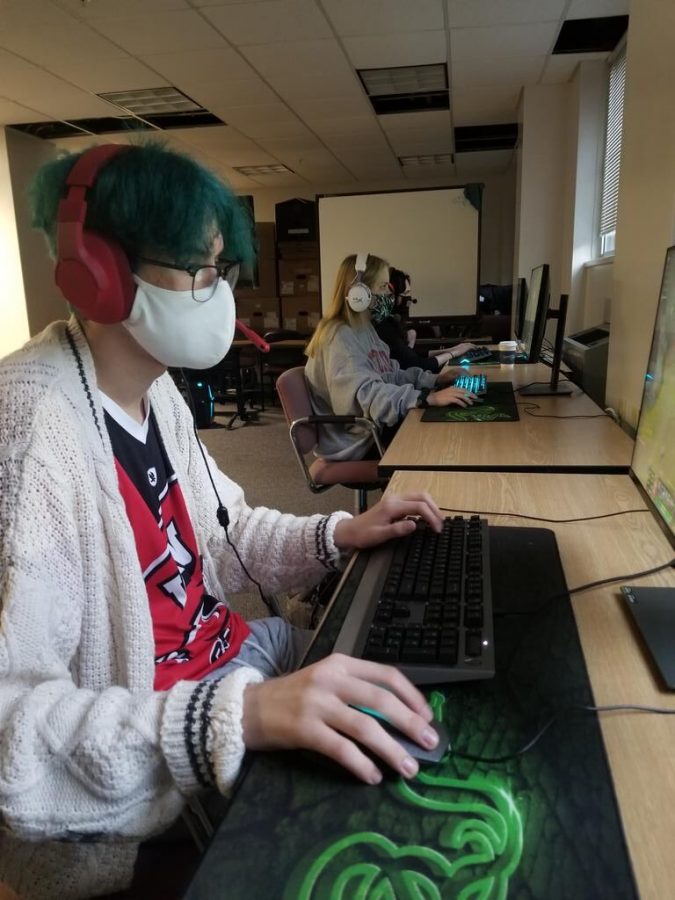 Patrick Schaller plays League of Legends with his teammates during one of their Esports practices at McCormack Hall here on WKU’s campus.

That fall semester, WKU had formed a formidable League of Legends team, making WKU’s new Esports program the second collegiate program in the nation, following the University of California-Irvine’s program.

By 2018, WKU’s Esports had expanded its program to benefit students worldwide with scholarship opportunities.

Then in 2019, WKU started to provide the program with new opportunities for competitive play with the addition of an Overwatch and a Rocket League team. These new teams allowed for the creation of more scholarship opportunities.

Many students can get involved even if they have no prior experience playing video games.

Haley Ray is a junior at WKU and a player for the Overwatch team since her freshman year.

Ray went on to talk about how the Overwatch team grabbed her interest in her freshman year on the Hill.

“Actually, they brought a couple of computers in the student union, DSU, and they set them up and played, and they let you play,” Ray said. “And I think that’s the best thing they’ve ever done.”

Ray also went into detail about how inexperienced gamers are still more than welcome to join the program.

“We have people on the team right now who showed that natural teamwork, or willingness to learn,” Ray said. “You just want to be interested and willing to learn and we can teach you how to aim and teach you strategies.”

For some students, getting involved may be quite the challenge because of a lack of proper equipment such as a gaming laptop and money to buy games.

Kellyanne Shaw is a senior at WKU and has been a member of WKU’s League of Legends team since her junior year.

“I know that our program has laptops and stuff that we lend out,” Shaw said. “I think Rocket League is free now and I know that League of Legends is free, but a lot of them are free games. And for League of Legends, you don’t have to have a big supercomputer.”

In the world of Esports, winning is completely dependent on working together, just like it would be in a sport such as football. Uniting under captains and working together to benefit each other is ultimately the most pertinent part of being on an Esports team.

Avery Bradley, a freshman and the team captain of the Rocket League team explained his responsibilities as the team’s captain.

“I consider myself as the leader of the team, the captain,” said Bradley. “I have to in my mind, at least try to and guide everyone in an upward motion, rather than downward. So, I’m trying to learn how to do that the best I can.”

Ray said that in her experience, the team captain is the person who brings the team together.

“They’re the encourager, they get everyone involved,” Ray said.

Despite the obvious talent and mental composure it takes time being an efficient team player, some people would still make the argument that Esports should not be considered a sport.

“They think it’s these 30-year-old guys living in their parent’s basements, they don’t do anything, and they don’t have jobs, but pretty much everyone on the team is extremely well rounded,” Ray said.

Not only are Esports events and streams growing in popularity daily, but video games as a whole have been exploding recently with COVID-19 pandemic shutting down many sporting events around the world.

“I know a lot of people that haven’t personally played video games in a really long time,” Shaw said. “It gave them a chance to just kinda catch up on the games.”

Bradley also mentioned how impressed he was with the growth of Esports in the past months.

“In light of current events, with coronavirus, how applicable it’s been to keep people watching and being competitive has been helpful,” Bradley said.

Bradley continued to talk about how his personal experiences in high school have convinced him Esports is continuing to grow in popularity.

Bradley not only experienced being at the top of the competition in high school Rocket League, but he managed to travel all the way to Lexington to compete in the state championship at the campus of the University of Kentucky.

“I got all the way up to that point and competed a few times. And I’d noticed that the turnout was starting to become more prevalent like you had to notice how many people were coming, showing up, and watching,” Bradley said.

Furthermore, as a member of the League of Legends team at WKU and a fan of the professional League of Legends players and competitive play, Shaw talked about how the constant growth of Esports, and Esports competitions, has been getting coverage by sources, such as ESPN.

“I think ESPN is also in for League of Legends,” Shaw said. “The Worlds Tournament is going on right now and it’s in China and they’ve been broadcasting it at sports bars, like Buffalo Wild Wings and stuff like that.”

The general public can watch WKU’s Esports teams in action, as they often stream not only their tournaments but also their scrimmages against other university teams.

“I know our Twitter is the best place to get the information for all of our tournaments because even if they aren’t incredibly active, they usually do retweet the WKU Twitch, which is like the streaming platform,” Shaw explained.

Shaw also stated that a lot of individual players will broadcast scrimmages against other universities on their personal Twitch accounts.

According to Bradley, streaming scrimmages on Twitch is an opportunity for himself and other players in the program to make money, while in school.

Ray stated that the players will stream their games on Sundays as well and on occasion, they stream on Thursdays.

The WKU Esports Twitter account provides more information on how to get involved and watch both scrimmages and tournament games. There are links to both the official Discord page as well as the Twitch link to watch tournaments on the Twitter page.