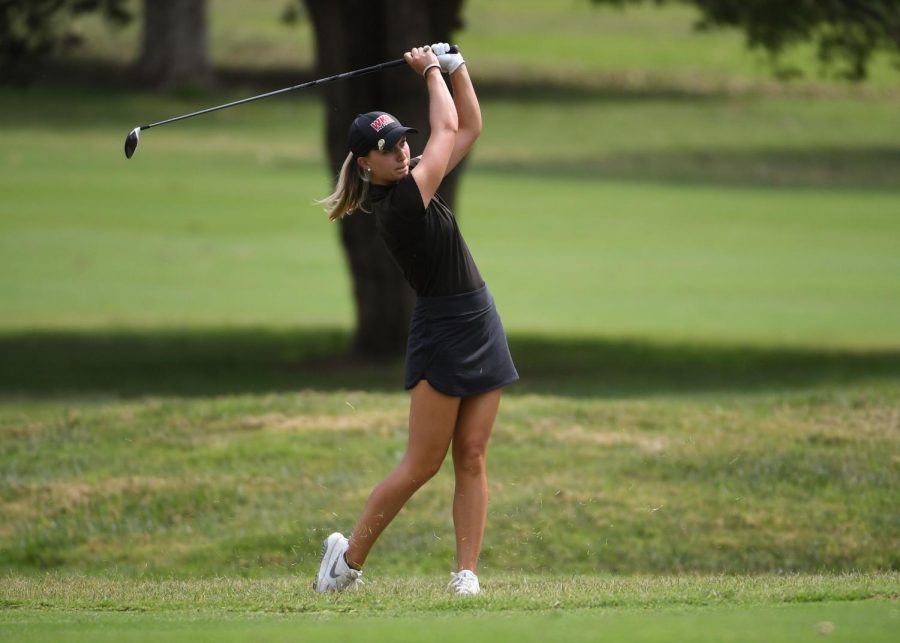 Graduate Mary Joiner on Aug. 8, 2019 as the Lady Toppers play a qualifying round at the Bowling Green Country Cub

In a year that has had little to no moments of exhilaration, heading into his seventh year as head coach Adam Gary believes that there will be something to root for this year with his squad.

“I’ve been really surprised honestly cause I consider this probably the best team in school history honestly on paper,” Gary said.

This year’s team is going to be led by Conference USA’s winningest player in graduate Mary Joiner and senior Meagan Clarke. Joiner accepted the NCAA’s invitation to come back to the Hill for another year after her senior year was cut short due to COVID-19.

Not only do the Lady Toppers have strong veteran leadership, they also have young and talented freshmen.

Two of those talented freshmen Rachel Rich and Rylea Marcum have earned their spots in qualifiers to make the journey down to the first competition.

Rich, who is from Mount Pleasant, S.C., will be in the three spot for WKU this weekend, while Georgetown, Ky native Marcum will round out the lineup in the five hole.

Marcum showed why she may be one of the most talented freshmen in C-USA this summer when she won the Justin Thomas American Junior Golf Association Tournament.

Joiner and Clarke being the veteran leaders for the standout freshmen could spell trouble for the rest of C-USA in this “COVID season,” and coach Gary recognizes that.

“To have a good mix of young incoming freshmen and then some returning veterans, it’s something that’s a huge positive to take out of this COVID thing,” Gary said.

A mix of veterans and freshman is on the docket for who will be teeing it up in the first match this weekend.

Sophomore Sarah Arnold and senior Olivia Reed will travel with the team, and serve as replacements in case one of the starters can’t play.

Other than the explosive freshmen coming in, and the returning captains of Joiner and Clarke, the Lady Toppers might have a hidden gem joining the program in redshirt senior Terri Dose.

Dose, a transfer from Mississippi State University, was the 2015 Kentucky Golf Coaches Association Player of the Year.

Adding a former SEC golfer to the roster might just be the cherry on top to this team truly becoming the school’s best team ever.