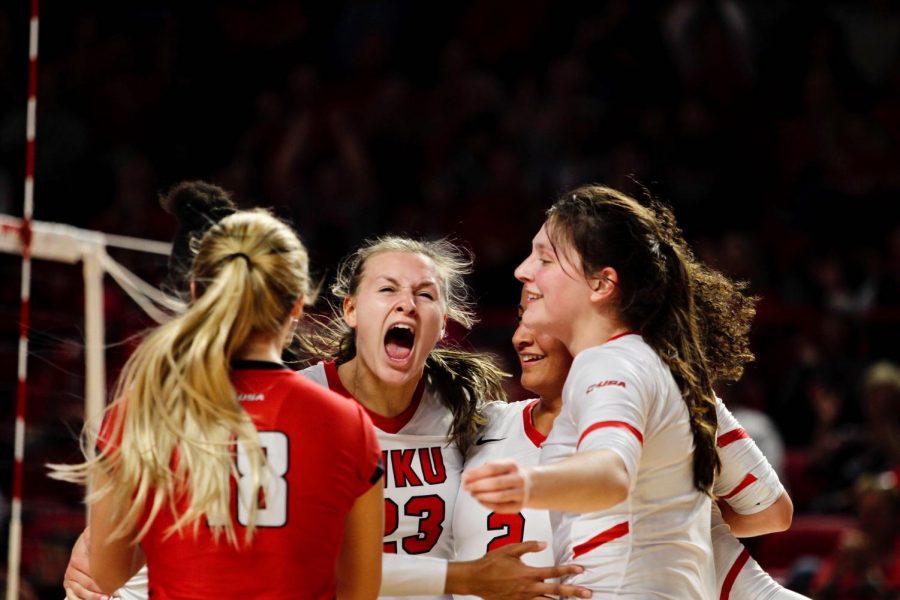 WKU senior Sophia Cerino (23) cries out in happiness during the Lady Toppers' NCAA Volleyball Tournament Second Round match against Louisville in Diddle Arena on Dec. 6, 2019. The Lady Toppers fell to the visiting Cardinals, 3-2.

WKU Volleyball will begin its 2020-21 season on Saturday, Oct. 3, according to an email from Jessica Leifheit, Associate Director of Communications and Media Relations for WKU Volleyball.

The team’s first match will be at home against Mercer University. This will be the schools’ fourth meeting, but the first time since 2005.

WKU’s first serve against Mercer is scheduled for noon CST.

“The team was just getting underway in its spring schedule when everything was shut down due to COVID-19 in March,” Leifheit said Wednesday in her email. “With student-athletes back on campus this fall, the team has been able to hold a pair of Red and White scrimmages on the E.A. Diddle Arena main court but the squad’s trio of newcomers will make their debuts on Oct. 3.”

Although not open to the public, the game can be streamed on Hilltopper Sports Satellite Network via Facebook.

“If additional fall matches are added, they will be announced as plans are finalized,” Leifheit said.

News and volleyball reporter Cassady Lamb can be reached at [email protected] Follow her on Twitter at @lambp0p.