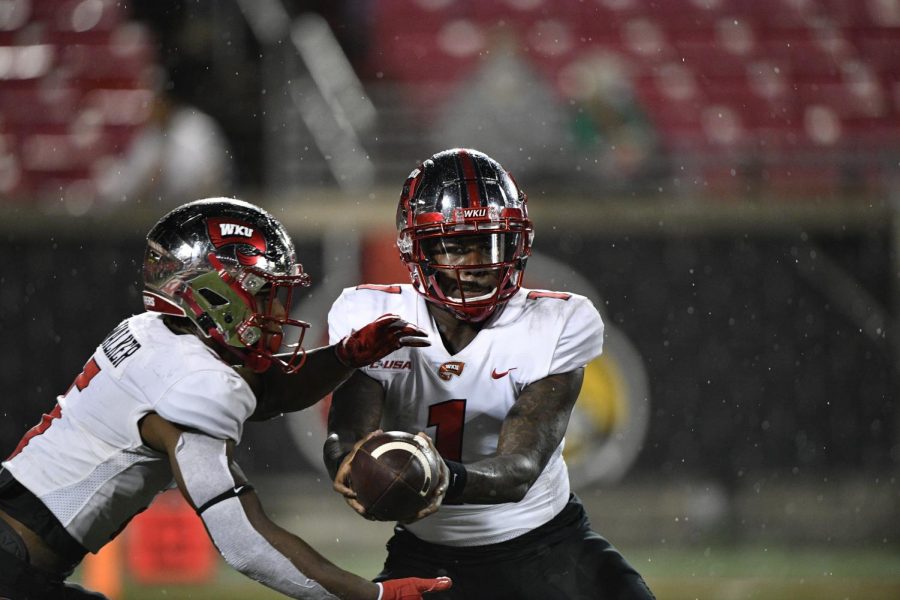 The Hilltoppers are set for their home opener after a 35-21 loss to open the season at the University of Louisville.

WKU will welcome the Liberty University Flames to Houchens-Smith Stadium as the two schools get set for their third matchup all-time. The Flames emerged victorious in both previous meetings winning 23-14 in 1996 at WKU, and winning 49-36 in Lynchburg, Virginia in 1995.

Head Coach Tyson Helton knows how important it is for the Hilltoppers to avoid an 0-2 start to the season. Helton stated just how big of a game this is for WKU.

Although Liberty has only been a Football Bowl Subdivision member for three years now, they have shown promise at this level and a very capable offensive scheme. The Flames averaged 32.8 points per game in an eight-win, bowl victory season last year.

Liberty Head Coach Hugh Freeze is the mastermind behind Liberty’s offense. Freeze is known for his time as head coach of Southeastern Conference school the University of Mississippi going 39-25 all time as a Rebel.

“I know Liberty’s going to be ready,” Helton said. “It’ll be their first game. I think they’ll be ready to play. I think Coach Freeze does a really good job, so I anticipate it being a really good football game.”

The main goal for WKU in this matchup will be to get the offense going, and to shut down Liberty’s passing game. The Hilltoppers were torched for 343 yards in the air against Louisville last Saturday.

“Our guys are hungry. I think Liberty’s a good offense,” White said. “It’s been a proven offense with coach Freeze in his system. They average about 36 points a game and that’s what they do, they put up points.”

As far as getting the offense settled in, Helton has expressed that graduate quarterback Tyrrell Pigrome has looked good in practice this week after a game in which the graduate transfer went 10 of 23 through the air.

“I thought the quarterback did a good job this week,” Helton said. “He’s really throwing the ball well, he’s managing the offense well.”

Pigrome will look to continue his first game success on the ground, and build on what he can do through the air.

On the other hand, Liberty has a quarterback that should not be overlooked in redshirt junior Malik Willis. The Flames signal caller sat out in 2019 due to NCAA transfer rules, but compiled 31.6 rushing yards per game in his freshman season at Auburn University.

White knows how difficult it is to scout a player like Willis who has jumped around from team to team without getting a ton of reps.

Other than Willis, the Flames return their second leading rusher from a season ago redshirt senior Joshua Mack, who compiled 792 yards on the ground to go with seven rushing touchdowns and a 5.8 yards per carry average.

“I think they got a good, solid running back,” Helton said. “34 does a really nice job. They got a big, tall receiver that does really good. I think defensively there’s a lot of new faces.”

Liberty’s defense returns just four starters from a season ago. It’s top three tacklers from 2019 all competed in NFL training camps this fall.

With Liberty’s defense being so raw, WKU must take advantage of it’s newcomers’ mistakes. More important than the Flames’ defense though is the Hilltooppers’ defense which has to do a better job of stopping the big plays that Louisville unleashed on them last week.

“I feel like our corners have done a really nice job this week guarding our receivers and trying to break up the big plays,” Helton said. “I feel good where we’re at, but we’ll get tested on Saturday.”

Aside from each team there is a much bigger hometown development happening. Graduate linebacker Eli Brown will play in his first game in his hometown of Bowling Green since 2018. He played his prep ball at Warren East High School.

“It’s everything I’ve been waiting on,” Brown said. “I’m going to have to give it the best game I got, because a lot of people counted me out…I feel like everybody forgot about Eli Brown for a minute.”

Brown played in 11 games in 2018 for the Hilltoppers recording 25 tackles. In 2019 Brown redshirted as he was recovering from an injury suffered in spring camp that preseason.

Taking this all into account this can contribute to WKU getting a win this week.

“We just gotta go out there and take care of our business,” Helton said. “…if we do what we’re supposed to do and play smart football, I think we’ll be in position to go get a win.”

Catch the Hilltoppers take on the Flames at Houchens-Smith Stadium Saturday, Sept. 19 at 11 a.m. central time. The game will be televised on ESPNU and radio broadcast locally on SAM 100.7 FM.