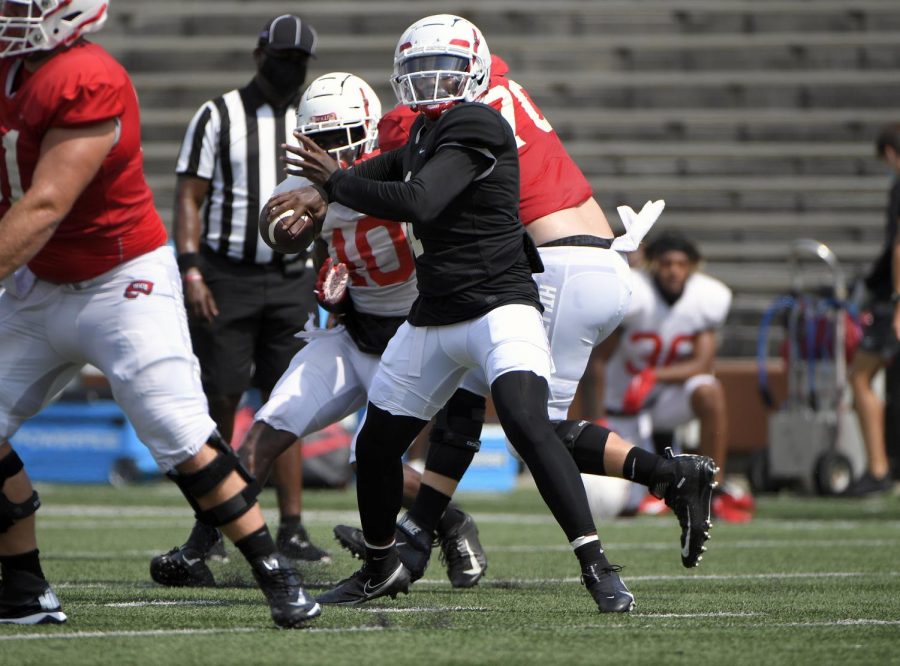 Graduate quarterback Tyrell Pigrome at practice on Aug. 29, 2020 during the first scrimmage of the season in Houchens-Smith Stadium.

T-minus 11 days until the Hilltoppers will take the field for the first time as they kick off their 2020 season at the University of Louisville.

After a delayed start to camp and an unexpected canceled practice last Thursday, WKU has fought through the adversity and continued to make the most of its shortened camp season. Two weeks into fall camp coaches and players alike have been able to get a better idea of what this team is about.

Saturday marked the first live scrimmage of fall camp for the Hilltoppers.

After a 109 tackle season in 2019 and being named a Conference USA honorable mention, senior linebacker Kyle Bailey was just thankful to be playing the game he loves, when some other schools aren’t so fortunate.

“With all the confusion going on and people not knowing if we are going to have a season … just being able to come out here and fly around just took a lot of stress off of everybody,” Bailey said.

With a scrimmage now under their belt, WKU’s playmakers are making themselves known. Defensive coordinator Clayton White was satisfied with what he saw from his defense on Saturday.

“It was one of those days where we just had to do our job,” White said. “Our offense has so much talent. I thought Roger Cray made some plays. He had two pass breakups.”

“There’s definitely new things that we’re putting in every week,” White said. “We want to play a different coverage behind blitz patterns this year than we did last year just to mix things up.”

From a team standpoint, the biggest benefit for this WKU defense is going up against a talented offense with depth day in and day out of practice. An experienced offensive line and shifty skilled players make for a great challenge for the defense.

“You wouldn’t really know who to cover if I’m going against those guys,” White said. “It’s made us a lot better. They’ve definitely improved, and you can definitely feel it. This year they have a lot more speed and a lot more talent on the football field.”

Although there lies an enormous amount of talent on the offensive side of the ball, the one glaring question is still who will be the starting quarterback come Sept. 12.

In recent interviews with head coach Tyson Helton last week, Helton has said that all five quarterbacks on the roster have been getting reps in practice and that no starter has emerged yet.

On the other hand, hearing what offensive coordinator Bryan Ellis and players have to say about the situation makes things all that much clearer.

“Being the quarterback’s coach, I was thrilled that we didn’t have any turnovers at the position,” Ellis said. “I was impressed with [Tyrell] Piggy [Pigrome]. I thought Piggy did some really good things.”

Turnovers or lack thereof, will be a key this season for the graduate signal caller Tyrell Pigrome if he does indeed win the job.

Coming into 2020 Pigrome has a career touchdown to interception ratio of 9 to 10. While Pigrome’s ability to take care of the ball is still up for discussion, his teammates have been impressed with what they have seen from the graduate transfer in practice.

Senior center Seth Joest praised not only Pigrome but what he has seen from the quarterback room in general.

“The whole o-line did really well, and of course Piggy’s really stepped it up,” Joest said. “We’re pretty deep at quarterback right now, and that guy is doing good.”

It is worth noting that upperclassmen Davis Shanley and Kevaris Thomas have plenty of ability to win the job, just not the mobility and play-making upside Pigrome has shown thus far.

Senior defensive back Antwon Kincade compared practicing against Pigrome to how the team has been preparing for a Louisville team with a mobile quarterback. “Piggy is an incredible quarterback, especially on his feet,” Kincade said. “Not only on his feet, he’s more dynamic with his touch pass. That’s what helps us prepare for quarterbacks like that.”

With their season kickoff under two weeks away, the Hilltoppers will look to tie up some loose ends before they travel to Cardinal Stadium. In a game in which the Cardinals are expected to be heavily favored, expect WKU to prepare for the upset in the coming days at practice.

“Our first scrimmage against our defense last year, we darn near didn’t get a yard,” Ellis said. “I’m really proud of our staff and our head coach of where we’ve come in a year’s time and how we really got a chance to be good on offense.”