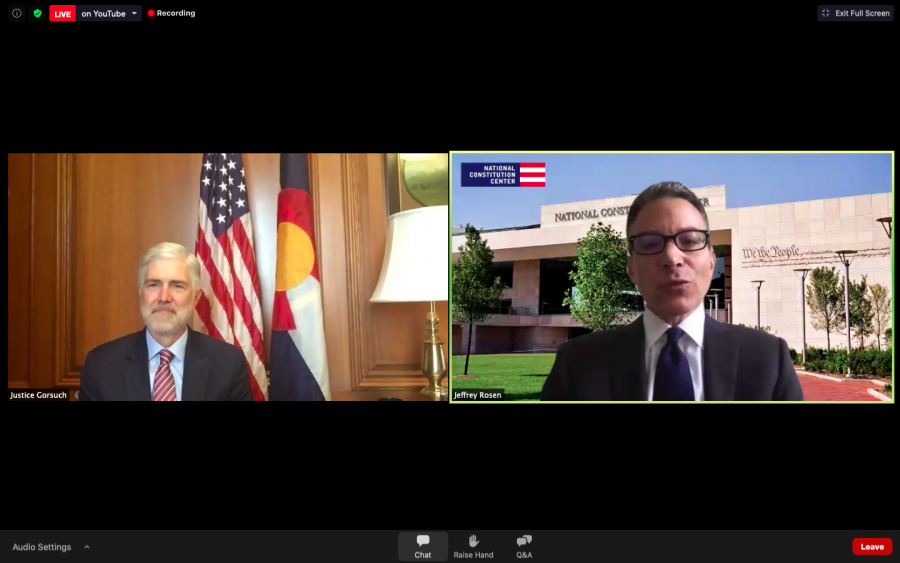 The National Constitution Center hosted the event with Associate Justice Neil Gorsuch to inform students on the importance of the U.S. Constitution. WKU was among universities to be included in the invitation.

“We should take a moment to recognize, yes, it’s not perfect, we always strive for a better union,” Gorsuch said. “But what we have been given, is an enormous gift, the likes of which is the envy of the world today, and has given us more freedom as individuals than any other arrangement of government in history.”

Gorsuch says that when the Constitution was written, our founders tried to strike a balance between a national government that worked and the importance of government being close to the people.

“Most importantly, we were wanting to do it in a way that recognized our unalienable rights as individuals,” Gorsuch said. “That people come first, before the state, we have rights that pre-exist the state and that the states job is to protect and defend. That’s the oath I take and every judge takes, to protect and defend the Constitution.”

Gorsuch mentioned Kentucky when reflecting on his role as a Supreme Court Justice.

One of the portraits on the walls of his office is of Justice John Marshall Harlan, a former slave holder from Kentucky who ruled on the famous case of Plessy v. Ferguson.  The question was rather segregation was allowed under the 14th Amendment, which promised equal protection under the law, according to Gorsuch.

“It was one of the saddest days in the Supreme Court history,” Gorsuch said. “The court ruled 8-1 in favor of ‘separate but equal,’ in spite of the 14th Amendment. Only John Marshall Harlan dissented.”

Gorsuch says he can’t imagine it made him popular in his home state of Kentucky, but says he knew it isn’t about what we would like the law to be, it’s about what the law is.

“The words ‘equal protection’ are not consistent with segregation, and Harlan stood up for the original meaning of the 14th Amendment despite a lot of pressure otherwise,” Gorsuch said.

Gorsuch says that while the role of the Supreme Court is important, even students can make a difference.

“Student’s job is to read about the Constitution,” Gorsuch said. “Only about one-third of the country knows there are three branches of government. Ten percent of the country believes Judge Judy is on the Supreme Court. As a student, I would say learn everything you can, because this is your Constitution. The responsibility to protect and defend it (the Constitution,) is going to be in your hands sooner than you think.”