Hilltoppers look to slow down Louisville offense in season opener 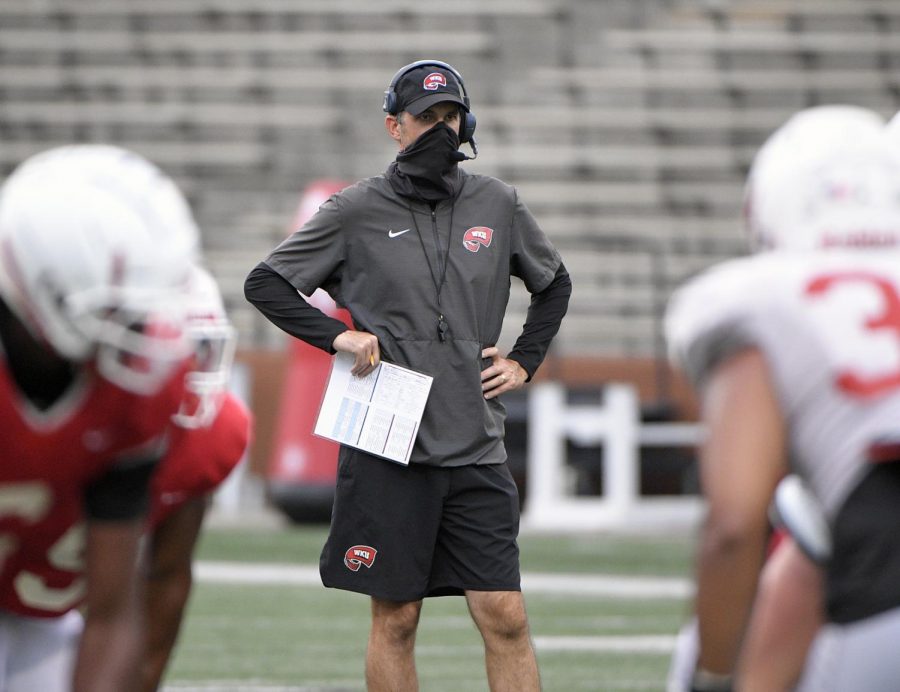 After a modified start to WKU’s 2020 football season, game week is finally here as the Hilltoppers are set to take on the Cardinals at the University of Louisville on Saturday.

Last season, WKU came into their matchup versus Louisville 1-1 on the season, and ultimately fell to the Cardinals 38-21 at Nissan Stadium.

This season, the Hilltoppers open up their 2020 campaign at Louisville as underdogs again, but this time WKU heads into the matchup with Head Coach Tyson Helton going into his second year at the helm.

“We’ll get up there Friday, we’ll do our COVID testing, that’ll be our third test for the week,” Helton said. “For the most part, the hay’s in the barn. It’s just a matter of keeping everybody healthy and hydrated and getting them ready to play.”

Although there have been no key players known to have tested positive for COVID-19, there were two subtractions to the roster this week. Returning senior receiver Jacquez Sloan entered the transfer portal this week, as well as Helton making it known there was a season ending injury on the team.

“We did have an injury at linebacker,” Helton said. “Clay Davis tore his ACL in fall camp, but we were able to get Eli Brown back, he had been injured last year. He’s done a nice job for us.”

Despite the losses at receiver and linebacker, Helton praises where his team stands coming out of fall camp and is looking forward to facing an in-state opponent like Louisville.

“As far as all the pieces to the puzzle that we’re counting on, I feel like we’re in a good spot,” Helton said. “There’s some areas we don’t have as much depth as we’d like to have…I feel good about where we’re at going into the first game.”

The opportunity to open up the season against a Louisville team that finished last season 8-5 with a bowl victory is quite the motivation for the Hilltoppers. Sophomore defensive back and Louisville native Beanie Bishop spoke of what it means to match up with the in-state opponent.

“It’s huge. Growing up I was a big Louisville fan, the family is Louisville fans, and it’s big just for me to go back home and have my family being able to watch,” Bishop said. “Hopefully I can put up a big performance and we go up there and get a win.”

Overlooked by many in-state football fans is the fact that this game is the only scheduled Football Subdivision matchup between two Kentucky schools this season. Two bowl winning teams from a season ago going head to head in their opening game is a recipe for excitement.

This will be WKU’s third straight season taking on the Cardinals. Aside from a defeat last season, the Hilltopper’s most recent outing against Louisville came in 2018 at Cardinal Stadium in the form of a close loss 20-17.

As far as what to watch for on the Cardinals side of the ball in this year’s game, look no further than the offense.

The Cardinals return dual-threat junior quarterback Micale Cunningham and sophomore running back Javian Hawkins. Cunningham totaled over 2500 total yards and 28 total touchdowns in his 2019 campaign, while Hawkins racked up over 1500 yards on the ground to go with 9 rushing touchdowns on the season.

“He’s a talented quarterback,” White said. “They’ve done a great job of developing him as an overall quarterback. He’s always been a great football player. This is the third year going against him.”

While Cunningham and Hawkins will certainly draw a lot of attention, junior receiver Tutu Atwell is not to be overlooked by this Hilltopper defense. Atwell torched the Hilltoppers for 141 yards receiving along with three touchdowns in last year’s matchup.

“He’s definitely an electric football player,” White said. “I think coach Satterfield and coach Ledford do a good job of moving him around and getting him the football.”

The Cardinals will look to their offensive trifecta early and often against the Hilltoppers, their only non-conference opponent this season. Louisville will face a grueling 10-game Atlantic Coast Conference schedule after taking on WKU Saturday.

As far as things go for the Hilltoppers in this year’s matchup, veteran leadership and getting off to a comfortable start will be key. Senior offensive lineman Cole Spencer reflected on what WKU can do better this year to come out on top this time.

“Last year I think the little things are what got us in that game,” Spencer said. “Twist pass-offs, and we had that fumble…other than that I thought we were fine. Just a couple small details we need to clean up.”

The stage is set for an in-state showdown in the Derby City. In Kentucky’s only FBS matchup of the season, respect is one thing that these two familiar foes share.

“Coach Satterfield is a tremendous coach. He’s a very very smart football coach. I think his staff does a great job,” Helton said.

Catch the Hilltoppers take on the Cardinals in a battle of the Bluegrass State at Cardinal Stadium Saturday, Sept. 12 at 7 P.M. central time. The game will be televised on ACC Network and radio broadcast locally on SAM 100.7 FM.