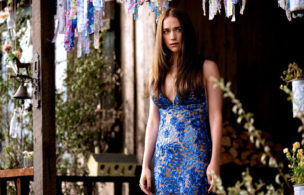 Earpers, we may be at the end, but if the April 9 finale is truly how Wynonna Earp goes out — it’s ending after four seasons on Syfy, but there’s always the possibility it’s saved elsewhere — it’s doing so in style.

“It’s the most heart-filled episode from start to finish that I’ve ever seen,” Melanie Scrofano, who plays demon hunter Wynonna Earp, tells TV Insider. “The show, to me, is characterized by humor and heart, and if we were to end on this episode, it represents our show perfectly.” See Also‘Wynonna Earp’ Stars on Nicole’s Pledge to Waverly, That Twist for Doc and More
Melanie Scrofano, Katherine Barrell, and Tim Rozon break down the penultimate episode of Syfy’s run of the drama.

Katherine Barrell, who plays Sheriff Nicole Haught, echoes that sentiment. “It’s an absolutely beautiful episode. I’m so proud of it and how it turned out,” she says. “It really is something we’ve been building towards for so, so long, and I hope the fans are as happy with it as we are.”

Let’s just hope that includes Nicole and Waverly Earp’s (Dominique Provost-Chalkley) wedding! Just because they seem to be Clanton-free — Cleo (Savannah Basely), the last of the Earps’ enemies, left town — and got rid of dark angel Waverly by Nicole pledging herself to protect the Ghost River Triangle doesn’t mean life will be quiet now.

As for what the finale holds for the show’s other couple, exes Wynonna and gunslinger, now de-vamped Doc Holliday (Tim Rozon), we’ll have to wait to see if they might have a happily ever after like the hopefully soon-to-be newlyweds.

Read on for more from the stars.

Both Scrofano and Barrell are happy with where we leave their characters, wherever that may be. “I’m so proud of not just the character but of what the show did with the character and letting this flawed human just be flawed and accept her as she is,” Scrofano says. “I’m just deeply in love with Wynonna. Whenever I played her, I had the sense that all my flaws were embraced by the writers, the network, the production company. When I was wearing that jacket, I felt powerful despite my flaws and I just couldn’t be prouder to have played her.”

Barrell, in particular, is grateful for her character’s arc in Season 4. (Nicole was the one left behind when the others went into the garden and returned 18 months later.) “I felt super at peace with the story no matter what happens, if we go on to find a new network and continue with Season 5 or if it’s the end,” she shares. “It’s a no-lose situation. I feel like Nicole got everything she ever wanted and I couldn’t be happier with that.”

There are countless moments, so admittedly, it’s hard for the actors to narrow down the ones that stood out to them. For Scrofano, she points to the birth of Wynonna and Doc’s daughter, Alice. “That was so real in the sense that I gave birth a few days later,” she recalls. “For me, my son will always have a link to that pool table. Any time I was in a scene with [the rest of the cast], I felt like it was connected and it mattered and I’m so grateful to them for their generosity.”

Barrell knows what quite a few significant Waverly and Nicole scenes have meant to the LGBTQ+ community, including the couple’s first kiss on Nedley’s (Greg Lawson) couch. “That was a huge moment for queer representation on television,” she says. “I’ve watched queer representation in the media change dramatically even in the five years the show’s been on the air. I’d like to think we might have had something to do with that.”

“I know other people in the industry are paying attention and they saw [the positive media attention] and it made them feel emboldened to improve their queer representation on their shows and do the work to really get it right,” she continues.

She also knows that Waverly and Nicole’s passionate reunion in Season 4 Episode 2 “was groundbreaking in its own way.” With that relationship, “we told a really great story and we did it in a really real way that resonated with a lot of people and made a lot of people feel seen and as an actor, you really can’t ask to do more than that.” “The storylines the writers wrote for this couple were so beautiful and so well thought-out and fleshed out and three-dimensional,” Barrell adds. “I’m really proud of the journey of watching Nicole settle into herself and her power. It’s so powerful not only to see someone so steadfast, so comfortable and proud of their own sexuality but also in a male-dominated field and being in a position of power and owning that and stepping into it.”

Rozon goes back to the first scene he shared with Scrofano as Doc and Wynonna at the bar because “you see the actors and the characters figuring each other out. It’s beautiful and it’s amazing that Peacemaker, Wynonna’s gun, was there in between them because it’s the thing that’s been between them being together ever since.”

The cast didn’t know the show was ending when they filmed what is now the finale, so they weren’t thinking about taking anything with them.

But Scrofano did take one of the four leather jackets for Wynonna, though she hasn’t taken it out just yet. “If [they] need it, it’ll still be in the wrapper,” she says. “Just to have it. Just as a safety blanket.” For Rozon, if he did take anything from set, it would’ve been Doc’s hat. However, “I never do. That’s just a superstitious thing. I feel like if I don’t take something, we’ll always come back,” he explains.

“I always try to buy as many of Nicole’s shirts as I can and then I do charity giveaways with them” at the end of a season, Barrell shares. But for herself, “I was very at peace with taking my memories.” She does wish she had maybe grabbed one of her character’s uniform shirts (though that changed a few times), her “adventure boots,” or her turquoise ring.