How hands-on classes are adapting to virtual learning 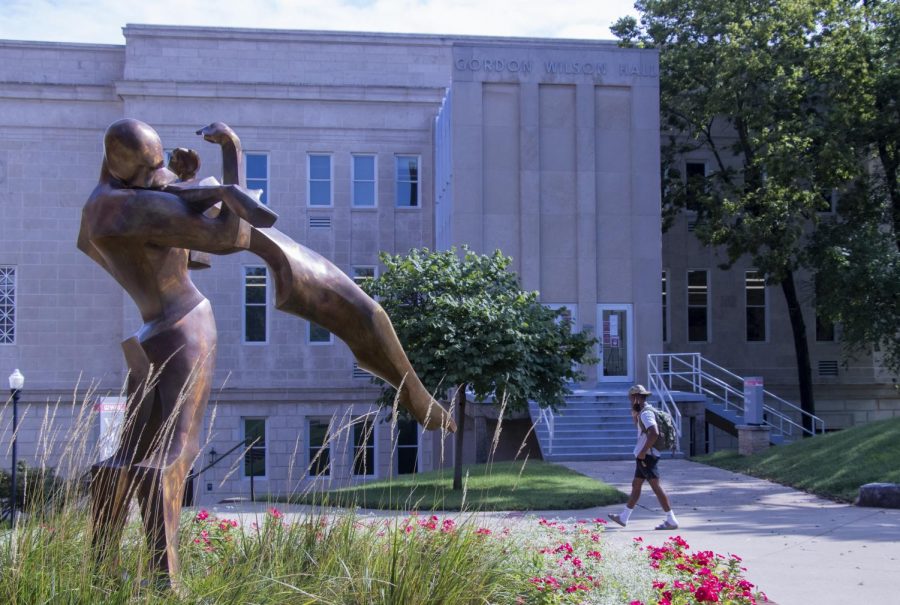 A student rushes past the “Trust” statue sculpted by Kendra Fleischman located on the top of Western Kentucky University’s campus on Monday morning, Aug. 31, 2020. Gordon Wilson Hall, the building behind the student, is home WKU’s Theater and Dance Program, who are currently dealing with the struggle of having to have classes in-person while still following COVID-19 guidelines.

Courses difficult to learn virtually, such as nursing or theatre, have struggled to transition into a hybrid class for- mat due to COVID-19.

WKU’s Department of Theatre and Dance made multiple adjustments to their learning process for the fall semester.

The first week of the semester had a busy start. A meeting including all students with majors or minors in dance was held through Zoom on the first day of school. Dance company meetings were held through Zoom later in the week.

Auditions were moved from the dance studio to Van Meter Hall. The department separated the audition into three different calls. The protocol for auditions usually had more than 40 individuals in one building. This year the most an audition call would have would be around 17 dancers. A total of about 50 students auditioned for the Fall 2020 semester.

The department’s convocation was also held through Zoom instead of in Russell Miller Theatre.

Dance courses are heavily movement-based. The majority of classes are face-to-face. Amanda Clark, associate professor and dance program coordinator, primarily teaches jazz and tap technique for the department as well as dance theory. Clark and the rest of the faculty jumped into the new ways of teaching in a coronavirus world.

“We wanted to provide security and stability to students and not stress them out anymore than the situation had done already and provide continuity,” Clark said.

Zoom had its share of setbacks for the program. Students would dance on screen for their classes, and timing would interfere with how long other students could dance. These technical difficulties caused a challenge for classes at the time. More concerns included logistical challenges with audio.

“I think that one of the tools in the performing artist tool belt is that we are resourceful,” Clark said.

The dance department prepared for the fall return of students on campus by locating their classes in different areas. Five classes were moved to Preston Center in a wide-open gym. Two courses were moved to Russell Miller Theatre in the Ivan Wilson Fine Arts Center.

A couple of classes remain in two dance studios in Gordon Wilson Hall. The class will have half of the students in one studio with three instructors and the other half in the opposite studio zoom- ing the first studio. The class will switch in the second gathering of the week.

All dancers are required to wear masks during the class, including while dancing. Faculty had the help of professional development webinars and a group of “Doctors for Dancers” to make sure every precaution was taken.

“[In] my costume technology class, there are normally 12 students in the costume shop, so what I did is I split them half and half,” Pollastek said. “Anything I lecture or demo I convert to video so when they come into class, they’re just doing it. We’ve spread out the sew- ing machines and the other supplies so there is enough space for six students at a time to work [while] social distancing.”

Pollastek also teaches stage makeup during the spring semester, which she had to adjust to completely online last spring after WKU shut down in-person classes.

“If we are still social distant in the spring when I teach stage makeup again, it will have to be over Zoom because we’d have to very far apart from each other to be safe and with masks, we wouldn’t be able to do anything other than eye makeup, so it really would not work,” said Pollastek.

Stage makeup requires students to use their full face, and sometimes practice on other students, so masks and social distancing make learning difficult to do in person.

“Another part of stage makeup is seeing how students look under stage lights — not under their bedroom lights shining on their face — so they do not get the complete experience,” said Pollastek. “Although, they were certainly able to learn the technical skills just fine.”

COVID-19 brought few changes to lecturing and great modifications to hands- on learning in the Department of Physical Therapy. Video lectures were present in learning before the pandemic began. First and second-year PT students had their hands-on classes postponed until a few weeks before the fall semester began. Three weeks prior to the fall semester both students and faculty came back to campus.

These students were required to pick back up on the lab skills from the spring. The continuation of the courses fell into the first week of the fall semester. Some third-year students had their clinical rotation adjusted into a shorter span of time.

Face-to-face labs returned in the fall. First and second-year students enter labs in small sections. Labs have remained the same in numbers by having 14 or 16 students working in pairs. The department has imputed a requirement to stick with whichever individual students choose as a partner at the beginning of the semester. The change helps minimize contact with other students.

Beth Norris, physical therapy department chair and professor, along with the rest of the faculty, are glad to be back in their regular routine. Norris and other PT professors were ready for their return to the previously closed building at the beginning of August.

“Until something is taken away from you, you don’t realize how much you take it for granted,” Norris said.

The guidelines for all PT labs include the six-foot distance between lab sections as well as masks being worn at all times. Sanitizing equipment is the key to keeping the department safe, considering all appliances are involved with the lab courses.

Nursing students at WKU experienced several changes made in their hands-on work and testing. The nursing department will continue to have its exams via Zoom. Students within the program will

have to take their exams on their iPad while having another electronic device to video their work area when the exam takes place. A normal in-class exam would usually be proctored.

“Incompletes” were given to students in the Fundamentals of Nursing lab who were not able to proceed with the spring semester. Many practice skills like injections and inserting catheters could not take place then. The students would only have their skill videos to watch from home.

The months of July and August brought opportunities for spring students to finish out their courses. The department made the effort to have all students come back to campus. Small groups were required in order to maintain safe protocol.

Dr. Crista Briggs, professor for the nursing department, said she was missing the human connection with students and her routine for work.

“It has made me more thankful for typical semesters when I am able to go to my office on campus and focus my heart and mind on teaching, service and scholarly activities,” Briggs said.

Students in the exercise science program also had to adjust to new learning formats. Rachel Tinius, who teaches an exercise testing and prescription class, explained transitioning her class to an entirely virtual format. Many other exercise science courses transitioned to the hybrid format.

“It’s very difficult because my class is an exercise testing and prescription class, so it has a very large hands-on component,” Tinius said. “It’s challenging to try to help students get those skills while keeping them out of the lab and not getting to see them face-to-face.”

Tinius also said how she feels that on line learning can lead to difficulty learn ing the class work in ways that don’t occur in traditional classes.

“I think we do our best to teach things as close to the same [as traditional classes] as we can, with a live zoom or a recorded lecture,” said Tinius. “There is just no way it can become a discussion-based learning environment, and it’s really hard for them to ask questions on the spot. And so a lot of students just don’t ask then, so then they don’t under stand it as well.”