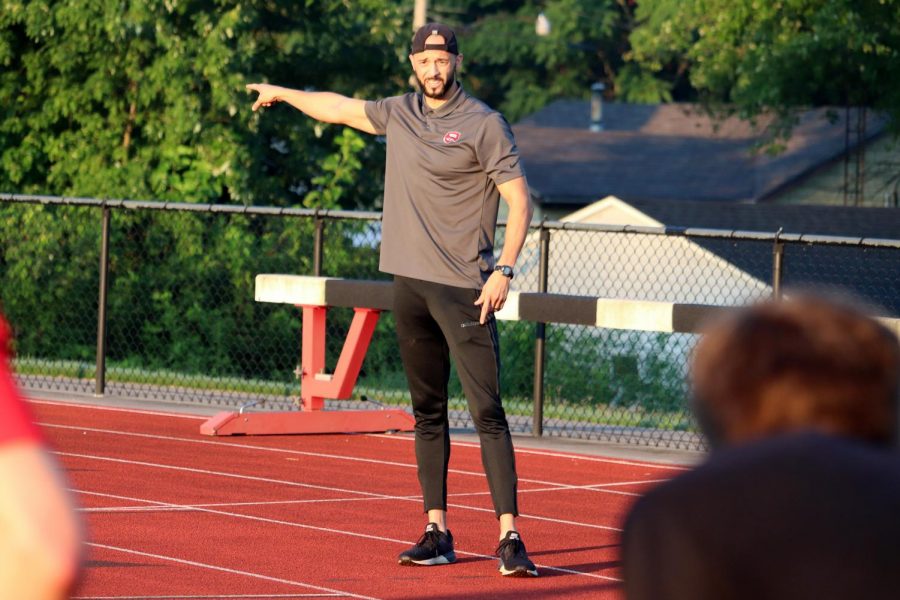 Cross-country head coach Brooks LeCompte signaling to his runners at practice prior to the first competition of the fall.

On Sept. 7, WKU Athletics announced that the men’s and women’s cross-country teams would continue with an opening competition for the 2020 season. Originally the teams were slated to travel to Austin Peay State University on Sept. 18.

After last competing in the NCAA Southeast Regional on Nov. 15, 2019, WKU’s respective cross-country teams will be in action this fall semester.

“This thing here we are dealing with is bigger than sport, it’s something where the health of the kids come first,” Head Coach Brooks LeCompte said ahead of his first season on the Hill. “We waited patiently for Conference USA to give us the nod, but these kids are very enthusiastic about getting to compete now that we know we are.”

The competition at APSU was postponed and instead, the Hilltoppers will head to Appalachian State University to kick off an additional WKU sport amid the COVID-19 pandemic.

LeCompte said the protocol now is to have a reduced travel roster and that it’s been a guessing game trying to figure out who would be the right people to take.

Cross-country joins the football and golf programs with sports back in action on the Hill. Volleyball and soccer are in preparation for their respective seasons for the ensuing Spring 2021.

First-year coach LeCompte will now be at the helm of the teams following the departure of Tim Sykes who was announced as head coach back on Aug. 12, 2019.

LeCompte was introduced on Jan. 22 this year and now heads into his first full season at the helm of the program. Formerly, the Lake Charles, Louisiana, native was the assistant coach for both cross-country and track and field at the University of North Carolina Wilmington.

LeCompte said in a release that he was very excited for his first season leading the Hilltoppers, and in a short time frame, he’s brought in a solid recruiting class.

“You couldn’t plan this, you have to be ready for whatever in this profession, but just don’t expect to come in during a pandemic,” LeCompte said. “I was just at a previous college, and I had just wrapped up recruiting, so I had to go back to the drawing board and start recruiting from scratch again.”

There are 16 total returning athletes to both the men’s and women’s teams. Additionally, the Hilltoppers welcome seven new faces to the teams for the 2020 campaign. Two of the newcomers are from Australia.

Freshman Casey Buchanan out of Adelaide for the men’s runners, and freshman Zoe Manning who hails out of Brisbane.

Buchanan was a bronze medalist in the Australian Under 20 Championship in the 800-meter competition while Manning was a national champion in Steeplechase under 18.

“He’s a middle-distance guy, but I integrated him into the longer distance stuff, and I asked him if it was too much,” LeCompte said of Buchanan. “Now we’re at the stage where he’s starting to do the whole workouts and he’s able to be one of our front runners.”

LeCompte added that an additional runner who came as a surprise for the women’s team was freshman Rory O’Connor out of Mount Washington, Kentucky. O’Connor last ran cross country in the eighth grade.

This kid is going to be one of my top runners,” LeCompte said. “The way she’s running now she probably would have been one of if not the top cross-country runner in Kentucky during high school.”

WKU’s cross-country team has yet to announce its full schedule yet and will be announced at a later date.

“We’re taking things week by week, there’s been meets we have initially been entered in and they tell us it’s postponed so I have to scramble,” LeCompte said. “I know we will have a Conference USA Championship, I believe UAB will be hosting.”

Following the competition at Appalachian State, LeCompte noted that the second meet is supposed to be the Louisville Classic two weeks later and that’s something the program is looking forward to.