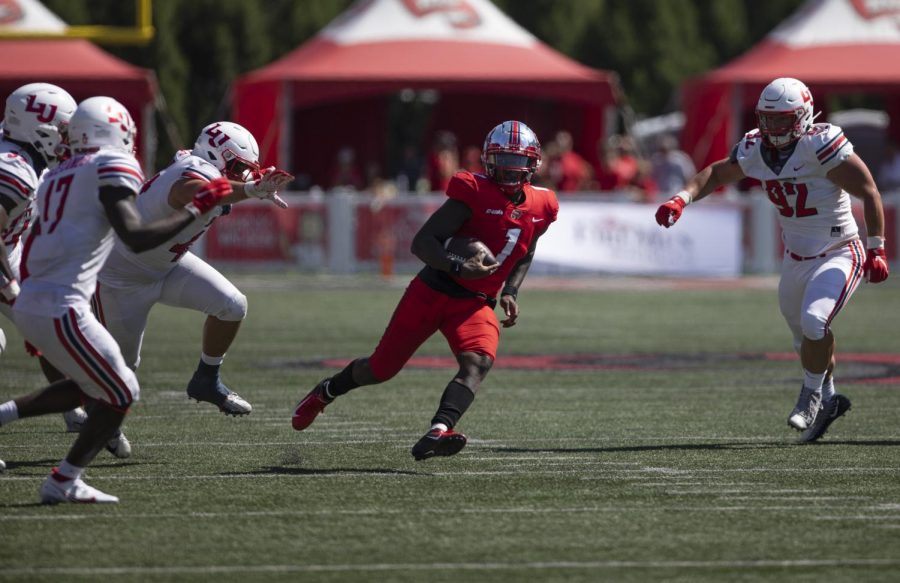 WKU graduate quarterback Tyrrell Pigrome (1) runs down the field during the home opener against Liberty University on Sept. 19, 2020.

Opening day for the Hilltoppers (0-2) in Houchens-Smith Stadium did not go according to plan, as Liberty University (1-0) held on to defeat WKU by a final score of 30-24.

WKU will have a bye week before its next game at Middle Tennessee State University (0-2) on Oct. 3 with kickoff at 4 p.m. The 100 miles of hate rivalry is renewed amid the COVID-19 pandemic.

The Blue Raiders will have a road matchup at the University of Texas-San Antonio Sept. 25 at 7 p.m. while WKU recuperates. The cross state matchup is MTSU’s homecoming game as well.

WKU has a 33-36 record all time against MTSU and has a 12-18 record in Murfreesboro, Tennessee. Last season the Hilltoppers pulled away with a 31-26 win over the Blue Raiders. MTSU led 13-10 at the half in 2019, but redshirt senior Gaej Walker scored the final touchdown sealing the win.

The all-time record against the Flames is now three consecutive losses in a row dating back to Nov. 18, 1995. Head Coach Hugh Freeze in his second year at the helm of the Flames won the first game of the season and ninth overall with the program.

WKU graduate quarterback Tyrrell Pigrome did everything he could to give the Hilltoppers a chance, throwing for 193 yards and three touchdowns. The University of Maryland transfer also added a total of 62 rushing yards to his credit.

“I thought he did a good job of taking care of the ball again,” said Head Coach Tyson Helton when talking about his quarterback. “He did a nice job of running the football.”

Though the Hilltoppers had solid play from Pigrome, he was out-worked by Liberty’s quarterback, redshirt junior Malik Willis. The Auburn University transfer had a career day that saw the dual-threat signal caller collect three rushing touchdowns with 168 rushing yards and 133 passing yards.

Right out of the gate Liberty took control having a 17-3 lead at the halfway point of the second quarter.

This woke up the WKU offense, as the program responded with a 6-yard touchdown pass from Pigrome to junior wide receiver Mitchell Tinsley to bring it back to a one possession game.

Tinsley would go on to lead the Hilltoppers in receptions (6) and receiving yards (64) for the game.

That momentum swing just before the half helped WKU rise to the occasion again in the third quarter, when Pigrome found redshirt freshman tight end Dalvin Smith for his first collegiate touchdown.

Just when everything looked to be back on track for the Hilltoppers, the dual threat in- stincts in Willis sparked a quick touchdown late in the third quarter.

A 51-yard run by Willis and a 29-yard run to the end zone by sophomore running back Shedro Louis put the Flames in front 24-17.

“I feel like we could have fit up the run a little bit better obviously, so that’s something we’ll correct during this bye week and heading into the [MTSU] game,” senior safety Devon Key said.

It looked like all hope was lost for WKU in the fourth after Malik Willis scored again with his legs to increase the deficit to 13, but Pigrome wasn’t finished yet.

On a nine play drive, the Hilltoppers drove 87-yards down the field that ended in another Pigrome touchdown pass to junior wide receiver Craig Burt Jr. for 26-yards with 3:41 remaining in the game.

The WKU defense couldn’t give the ball back to Pigrome and company though, resulting in back-to-back losses for the Hilltoppers.

WKU now enters the bye week, and Smith has an idea of what needs to be addressed the most during this off time.

“I feel like we can make the most improvement in probably like the passing game,” Smith said. “Just trying to just get the ball out quick. Just get athletes in open space.”