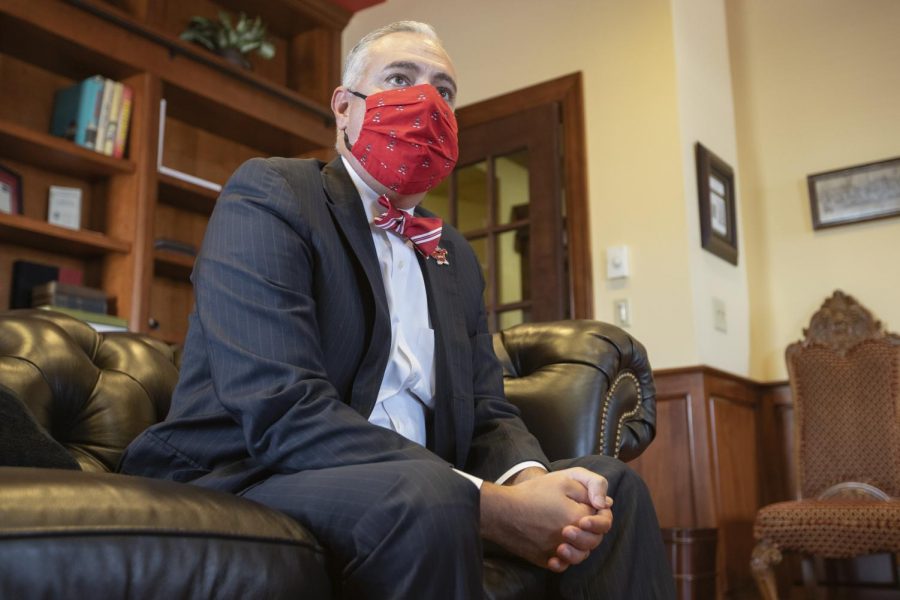 WKU President Timothy Caboni announced freshmen in the class of 2025 will be able to attend WKU with tuition covered if they are Pell Grant eligible and if they have a 3.0 GPA. Caboni gave the announcement during a press conference on Sept. 17 at the Auguenstein Alumni Center.

The new award will waive tuition for any student starting in the freshman class of Fall 2021 from Kentucky who receives Pell Grant funding. These students must have a 3.0 cumulative, unweighted GPA at high school graduation. This award lasts for four years of undergraduate education.

WKU President Timothy Caboni said this change reflects his desire to see any successful student who wants to attend college able to do so, regardless of their financial situation.

“When I arrived three years ago, I said we want WKU to be affordable and accessible to any student no matter their family’s economic condition,” Caboni said. “And we’ve worked really hard to increase access through affordability. This builds upon what we did last year.”

Last year, WKU announced ACT or SAT scores would no longer be required for admission for students with a cumulative, unweighted high school GPA of 2.50. Another $5.2 million was allocated to the scholarship fund last year also, Caboni said.

“There was a concern that we’ve heard from students with good GPAs who just couldn’t afford to come because of the gap between the scholarship and aid that they had and what they needed to pay for the WKU experience,” Caboni said. “For us to be successful as a Commonwealth, for us to meet the [Council on Postsecondary Education] goals of 60% attainment rate for four degrees by 2030, we need more people going to college and, more importantly, we need more people, finishing college right. ”

Currently, in-state tuition costs $5,401 per semester at WKU.The average payout for Pell Grant recipients in 2018 was $4,271, according to the National Center for Educational statistics.

Non-tuition expenses, such as housing and textbooks, will not be waived under the Hilltopper Guarantee.

Caboni pointed to the success of WKU’s Opportunity Fund and increased scholarship funding as the financial foundation for this decision.

“We’ve raised almost $40 million in the three years since we announced that to help young people who otherwise couldn’t come to WKU have the full college experience and so the Opportunity Fund also will help support the effort,” Caboni said, referring to the Opportunity Fund.

While this year’s enrollment and graduation numbers will be finalized in October, Caboni said this year’s freshman class had grown by over 450 students and last year’s graduation was the largest class in the university’s history.

WKU’s first-year freshmen enrollment saw a significant increase over the past year, while overall undergraduate and graduate enrollment has decreased, the provost announced in an email last month.

Caboni emphasised the importance of this change in regards to increasing the diversity of the student body.

“I’m really proud of the work that we did last year continuing this year,” Caboni said. “This fall’s first year class, we had the largest enrollment of underrepresented minority students in the university’s history. And when you look at the retention from first to second year of the class we admitted in fall of ‘19, we’ve closed that achievement gap for underrepresented minority students.”