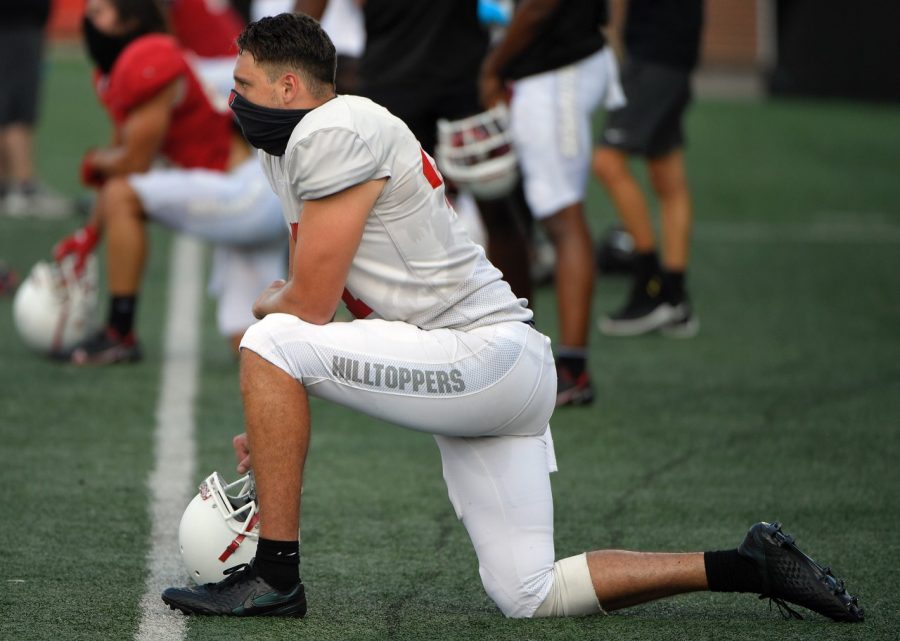 Punter John Haggerty kneels at practice in Houchens-Smith Stadium. The Sydney, Australia native enters into his senior year on The Hill.

Three WKU Football players were honored as the Conference USA released their preseason awards Tuesday selected by the league’s 14 coaches.

2019 C-USA Defensive Player of the Year Malone will look to repeat after a stellar junior season. Malone is WKU’s first league defensive player of the year since linebacker Xavius Boyd and defensive end Quanterus Smith won the same award in the Sun Belt Conference in 2013 and 2012, respectively.

Haggerty was quick to have an impact in his first season on The Hill. The Sydney, Australia native boomed 45 punts for a gross average of 45.9 yards, ranking first in C-USA, while setting a single season program record for the Hilltoppers.

“It’s good to have, but I don’t play football for the awards I play to win,” Haggerty said. “I’ve been working on my holding a lot as well – that’s very important to get points on the board.”

As part of one of the most effective offensive lines in the country last season, Meredith continued his streak of starting in 25 consecutive games for the Hilltoppers.

“The main thing for those guys is to always have a chip on their shoulder,” Helton said. “That’s how they played last year, and they’re doing that right now. It’s nice for those guys to have preseason awards, but they don’t mean anything.”

Helton was again asked about the starting quarterback position and who may have the upper hand, but gave no hints as to whom the most reps are going to.

“By the middle of this week, I’ve already talked to coach Ellis, we’ll have to give the majority of the reps to two guys,” Helton said. “We’re getting there, but we’re still repping all five.”

WKU’s season inches closer as the Hilltoppers get set to head to the University of Louisville for their season opener on Sept. 12.