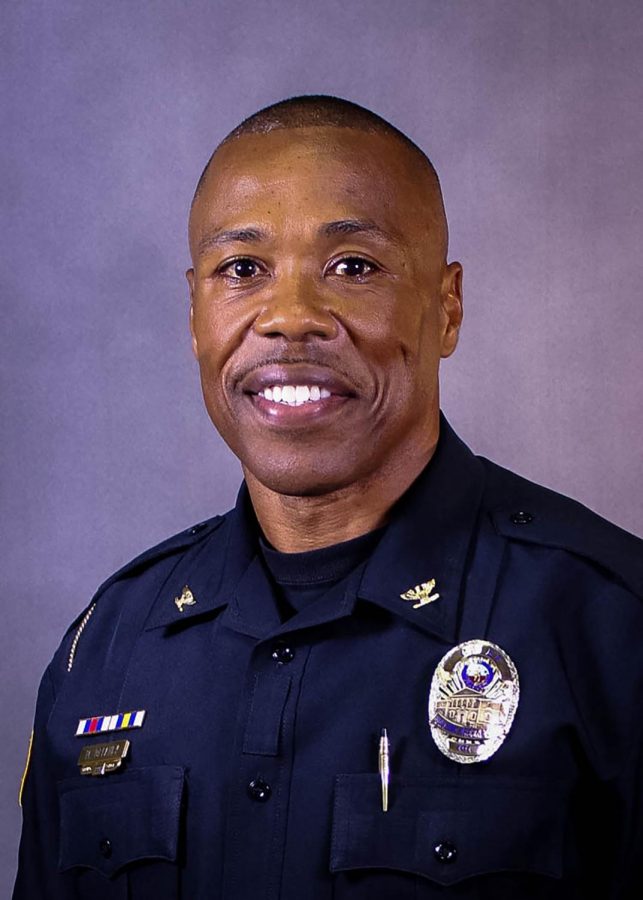 Having recently been named the first Black chief of police in the history of the city of Bowling Green, Michael Delaney plans to use his leadership to connect the community and the police.

Chief Delaney was amongst two other candidates, assistant chief of the Logistics Division Brian Harrell and deputy chief of the Support Service Bureau Penny Bowles.

Delaney said he is very excited about his new position.

“I’m very happy and honored to be chosen to be the next Chief and I feel very privileged because we have a great police department with a lot of great officers,” Delaney said. “I’m lucky to be able to have this new position in a community and a town that supports us and is behind the police department. It’s been great so far.”

Delaney credited his years of experience in aiding the process of being selected as the new Chief of Police. Throughout his 22-year career, Delaney has held many positions in the Bowling Green Police Department, including Advanced and Master Police Officer, Sergeant, Captain, Major, Lieutenant Colonel, and Deputy in Chief.

Delaney said he was influenced very early on in his life. He recounts the first time he saw a Black police officer. A state trooper, B.B Davis, had just become a new neighbor.

“He moved into our neighborhood for a short period of time, but the way that he carried himself and how he interacted with the community gave me an aspiration that maybe one day I could do that,” Delaney said.

Delaney also recounted his interaction with another Black police officer, retired Bowling Green police officer Tom Forte. In 1996, Delaney had taken the written exam to become a police officer. At the time, applicants were required to score a 72 on the written test and Delaney scored a 71. Delaney recalled Forte calling him afterward and telling him to try again.

“I wasn’t going to apply again because I thought that it wasn’t in the cards for me, maybe I should stay where I’m at. I had a good job at the time. He says, ‘I saw something in you that day. I think you should really come back and take the test again,’” said Delaney.

During a conversation at the police station, Forte convinced Delaney to retake the test. Delaney passed the test on his second attempt.

The reaction to Delaney’s promotion in the Bowling Green community has been very positive.

Brandi Duvall, Warren County Circuit Court clerk, said she is very proud of her friend and is looking forward to working with Chief Delaney.

“I had the honor of serving on the Warren County Welfare Board with Mike for several years and having partnered with Mike and BGPD on several charitable events, he undoubtedly cares for our community and has a heart to serve. Everyone can rest assured that we are in good hands,” Duvall said.

A former coworker and Chief of Police of WKU Police Department, Mitchell Walker, said he and Delaney are like brothers. Walker believes he is the right person for the job and after years of working with each other, working with Delaney again will be nothing new.

“I’ve worked with him and have been in contact with him all the time since I have been chief. Over the twenty years of getting to know him, he will do great. It will be a blessing for the community,” said Walker.

Delaney said he looks forward to working with Chief Walker as well as Warren County Sheriff, Brett Hightower. Having worked with both men, he believes their resources will work great together to help benefit the community.

“I think we will be able to collaborate on ideas together and bounce ideas off of each other on how we can improve in areas we need to improve in. I think it will also build really good community support to see all three agencies working together and showing one united front,” Delaney said.

Chief Delaney’s work in the community has been recognized on multiple occasions. He has been awarded many civic and law enforcement honors such as WKU’s President Award for Diversity, the Bowling Green/Warren Country Trail Blazer Award, Life-Saving Medal, Distinguished Medal of Service, and more.

One of Delaney’s goals for his new position is to foster and build connections as well as offer more transparency with the police department.

“One of the main goals is to increase our relationship within the city, within the local community, other law enforcement agencies, and other outside entities to help create more awareness of what the police department does,” Delaney said.

Delaney hopes for officers to see that they are a part of something much bigger than a job and to help grow their trust with the community they serve.

“I want them to understand that what they do is very important. They have a great impact on our community. They are more than just a person behind a uniform and a badge,” Delaney said.