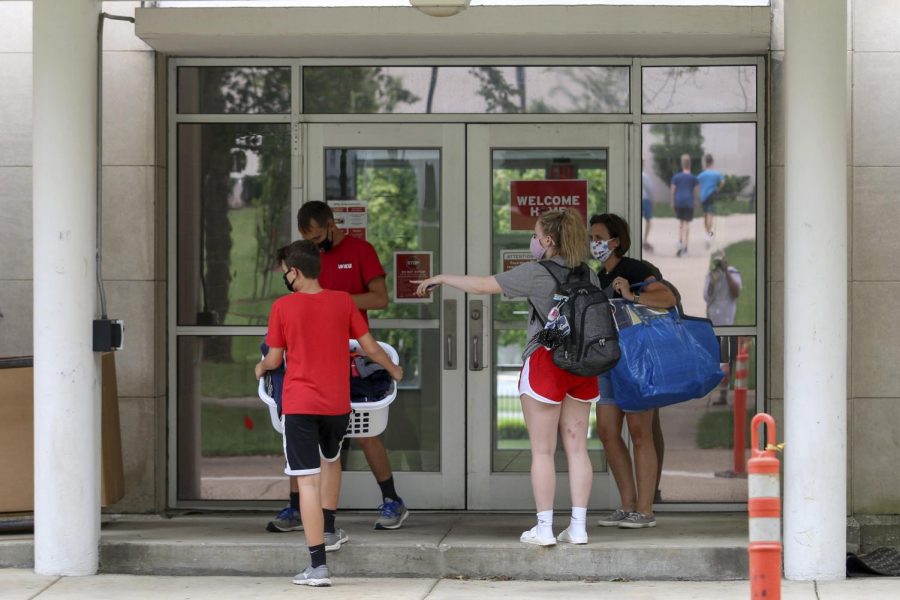 A student directs family members while moving into McCormack Hall on Wednesday, August 19, 2020.

In an attempt to slow the spread of COVID-19 as students return to campus for M.A.S.T.E.R. Plan, WKU implemented several major changes, including two new ways for freshmen to move onto campus.

Students choose from either the “Top Drop & Go” option, available from August 1 through August 11, or the curbside check-in option that ran from August 17 through August 19. ‘Top Drop & Go,’ allowed students to bring their belongings to their dorm before actually moving to campus while curbside check-in allowed students to reserve a one hour window to move into their dorms.

Traditionally students would all arrive within two days of each other, get their room keys and start moving in, but COVID-19 had made administrators take a different approach. This year’s M.A.S.T.E.R. Plan includes 18 in-person events and 14-virtual events, all designed with social distancing guidelines in mind. Additionally, a face mask is required at all in-person activities, including outdoors.

M.A.S.T.E.R. Plan activities are scheduled to begin Thursday and run until Saturday, giving students a break before classes begin on Monday.

Jack Gallow, a business major from Louisville and resident at Minton Hall, said he’s been pleasantly surprised with the whole experience. Gallow used the “Top Drop & Go” method for dropping off his belongings and describes the process as a little weird.

“I dropped my stuff off, but I couldn’t move in, so I went to the beach and then I came back,” Gallow said. “It’s interesting.”

While Gallow’s experience was unproblematic, some parents are frustrated with the process and apparent lack of communication.

Jennifer Hagan, a WKU alumna and mother of a WKU freshman from Bardstown, said they’d like some clear directions, pandemic or not. She also emphasized the key to success, not only during a pandemic but in life, is clear expectations that emphasize participation.

“On the way up here, we were telling our son to get involved, to meet people, to do clubs, to have the university life,” Hagan said when recalling a conversation with her son. “But there’s got a balance with how to do that safely. So if he’s going to get the true experience of being a college student, or if he’s going to hide in his dorm because of all the restrictions, I just hope he can find a balance.”

Grace Anderson, a freshman fine arts major from Minnesota, arrived on WKU’s campus Tuesday. She came to study musical theater and says she’s excited about being away from home, but also a little nervous, too. As for her outlook on the coming semester, she says she’s prepared for anything.

“Every time somebody makes a plan I’m just kind of ready for it to change,” Anderson said. “It’s weird because they won’t let you have guests right now, until the 20th, especially since I have [my boyfriend] here. I’m like, where are we going to go? There’s nowhere to go right now, just because of everything. So it felt a little weird, but it was also kind of nice having a check-in slot and not having so many people crowd the stairwells in Gilbert Hall, because there’s no elevators.”

As for the possibility of having to move from in-person classes to virtual learning, Anderson says she’s gained useful experience from her spring semester in high school.

“Some of the online learning stuff I don’t mind, because I’m used to it from my spring semester of high school in my senior year,” Anderson said. “But some of the in-person stuff I’m excited for.”

Individuals wanting more information on M.A.S.T.E.R. Plan can contact their Resident Assistant or go to WKU.edu/masterplan.