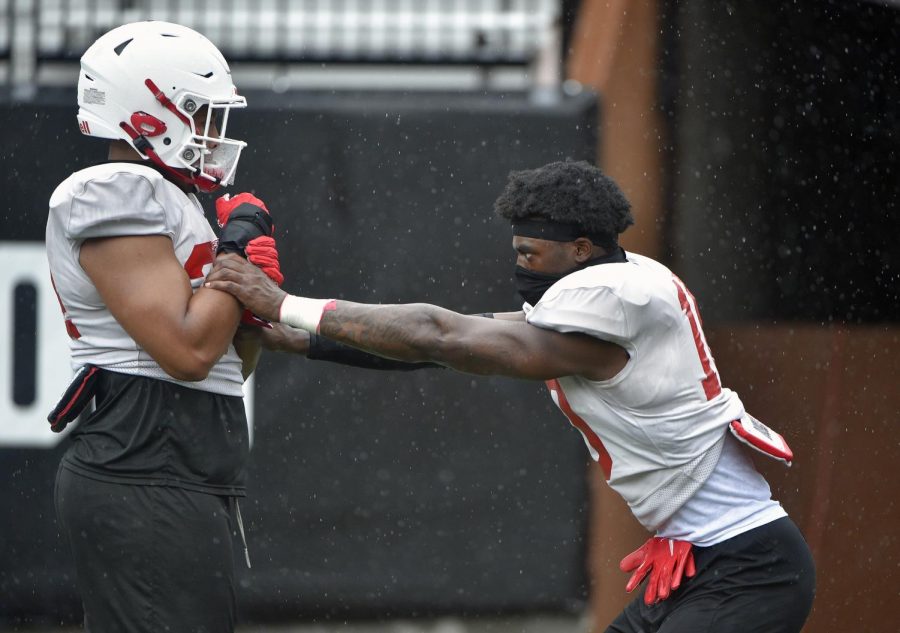 After what has been a roller coaster of an offseason around college football, WKU’s season kicks off in 18 days, when the Hilltoppers travel to Louisville to face the Cardinals.

With a ServPro First Responder Bowl victory to cap off the 2019 campaign and going 9-4 overall on the gridiron, the Hilltoppers’ expectations will be higher this season. Head coach Tyson Helton heads into his second year at the helm with seven returning starters on offense and nine on defense.

Even with veteran players returning for WKU, there are still some vacant roles that must be filled this season.

There are also 94 catches that must be replaced after the graduation of Lucky Jackson who was voted No. 1 team All C-USA receiver. Quarterback Ty Storey completed 241 passes, which also must be replaced this season.

The start of fall camp officially began Monday, Aug. 17 after being delayed due to COVID-19 concerns.

Answers to whom the Hilltoppers’ starting signal-caller will be should come prior to the Sept. 12 season opener at Louisville. Candidates for the role include graduate transfer from Maryland Tyrell Pigrome and junior Davis

Shanley — who bring the most experience to the table — but with fall camp being pushed back, there is less time to evaluate the situation, according to offensive coordinator Bryan Ellis.

“It might not be completely fair, but I’ve had to kinda make an educated guess on who I think these two or three guys are going to be,” Ellis said. “These are the guys we’re going to have to go play with.”

Storey didn’t sew up the starting quarterback position until game four last season, after Steven Duncan’s injury. Duncan was named the 2019 starter just nine days before the Hilltoppers’ first game of the season.

“We went out and signed a graduate transfer for a reason,” Ellis said. “We didn’t sign him to come out here and be the backup. I know that’s kind of how it played out last year, but every year is a new year.”

Pigrome brings dual-threat attributes to a Hilltopper offense that put up over 5,000 total yards a season ago. At Maryland in 2019, he totaled 872 all-purpose yards in 11 games as the starter for the Terrapins.

Adding Pigrome to the run game with returning senior running back Gaej Walker could be a potential dual-threat offensively this season if Pigrome wins the job.

The quarterback position is still a mystery at this point in camp. But WKU’s defense has fewer questions to answer before the start of the season than the offense.

The Hilltoppers’ front seven returns over 25 sacks from last season. More than 18 of those came from returning seniors Juwan Jones and DeAngelo Malone.

Defensive coordinator Clayton White praises the relationship Jones and Malone have shown so far in camp.

“They work well together,” White said. “I went down to coach Baker’s office … and I walked in there, and I bumped into those two big boys watching tape during their free time.”

With Jones coming from one edge, and Malone opposite him, these two will give opposing offensive lines a challenge this season. With Malone being named to the pre-season Bednarik award watch list — honoring the nation’s most outstanding defensive player — White expects him to draw some double teams this season.

“Our D-Tackles are the ones that are really excited about it,” White said. “They’re going to get more of the one-on-one opportunities against a guard. I think DeAngelo wants to be moved around some. You’ll see him all over the field.”

The Hilltopper defense hopes to be versatile and effective in all aspects of the game this season.

“I’m coming out here and getting better every day,” Malone said. “Even though I’m getting highly praised, I gotta keep that work ethic up.”

Around campus and around the nation, the Hilltoppers’ expectations this season are high. Five Hilltoppers were named to preseason award watch lists.

What’s most important to the team is that it has the community and media’s confidence that this will be a successful season on The Hill. Red Towel Radio host Tyler Eaton said he shares Helton’s belief that the Hilltoppers can play at a championship level.

“I’ll tell you what Tyson Helton told me — this team is built to win championships,” Eaton said. “I know expectations are a dangerous thing, but I expect this team to be in the mix for a conference title again.”

The road won’t be easy, with eight teams on the current schedule that played in a bowl game last season. But an adversity stricken start to the college football season could only benefit WKU on its journey for its first C-USA title since 2016.