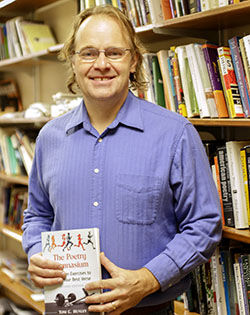 Dr.Tom Hunley, a professor in the English Department, has won the prestigious Rattle Chapbook Contest.

Hunley’s award-winning collection of poetry, “Adjusting to the Lights”, is based on his experiences of raising two kids who have special needs. His son has autism and his daughter, who he adopted, has various special needs.

After failing to win the poetry contest last year, Hunley captured a prize this year with two other entrants. Because he was one of the winning contestants, Hunley will receive $5,000 and a copy of his work will be sent to the magazine’s 7,000 subscribers.

Hunley said he is still shocked by winning the contest. Even after 30 years of writing and publishing for many notable literary periodicals, he still remains motivated.

“I get a lot of rejection letters,” Hunley said. “After winning this, it’s very affirming. I don’t want to take it too seriously, but I feel like this will help me be encouraged and write the next poem.”

He has also written two textbooks about poetry. One is called Teaching Poetry Writing, which is his ideas for teachers on how to teach poetry writing. The other textbook is called The Poetry Gymnasium, which includes 110 exercises for undergraduate students.

After each exercise there is an example poem by one of his former students. His students at WKU helped him by trying out his exercises and then writing their own poems.

“A lot of their work is in the book, so I am really happy with that book in particular because a lot of my students got published as well,” said Hunley.

Hunley said writing poetry helps him cope with what is going on in the world.

“For whatever reason the way for me to make sense of the world was through poems,” said Hunley.