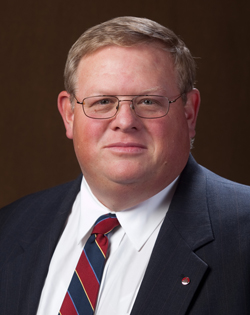 After spending four decades on the hill, Brian Kuster has said goodbye.

Kuster served as WKU’s vice president for Enrollment and Student Experience for four years before retiring on Tuesday, but his involvement with the university dates back to when he started his studies as a Hilltopper in 1980.

“I was in Housing for 31 of my 35 years at Western, and to see the former (resident assistants) or former hall directors that have been very successful, I’m proud of that,” Kuster said.

Kuster took on his latest role at WKU after President Timothy Caboni merged the Student Affairs and Enrollment Management divisions into the Division of Enrollment and Student Experience. Kuster said that he had planned on retiring in 2018, but Caboni persuaded him to remain on campus for a few years.

“Brian has invested his life into this university,” Caboni said in a Board of Regents meeting on June 26. “Every day, Brian shows up and treats our 20,000 students as his own kids.”

For the past few years, Kuster has had to persevere through multiple operations on his knees.

“I’ve had my left knee replaced, I guess four years ago, and I just had bone on bone in my right knee,” Kuster said. “So I just had a lot of pain and difficulty (while) walking and doing physical activities, and so I needed to get that fixed.”

Kuster’s right knee was replaced on June 9. He said that his knee replacements did not affect his decision to retire on Tuesday.

Kuster’s work at WKU has gone beyond the Division of Enrollment and Student Experience. A year after becoming the director of Housing and Residence Life, Kuster signed on with another new organization within the university.

The First Year Village, which will be open to students in the fall of 2021, is part of a 10-year housing plan that the Student Life Foundation embarked on four years ago. Kuster believes the First Year Village could help increase student enrollment in the future because the students living in that area will be housed in a Living Learning Community pod with 25 to 26 students.

“From all the research that we’ve seen, Living Learning Communities definitely help with retention of students, and it helps them find a sense of belonging, a sense of place at the institution, and I think that’s a big part of their retention,” Kuster said.

“I think he’s who Western needs now,” Kuster said. “He’ll listen to the staff and will allow them to grow in their positions, but also help develop them in the areas that they need work in.”

Kuster believes that his experiences at WKU have been very meaningful.

“You don’t work some place for 35 years and not become entrenched,” Kuster said. “It’s more than a job.”